The ‘Caravans’ Are Coming

During the Easter weekend, when many Americans were watching the college basketball championships, President Donald Trump kept his eye on America’s southern border. It’s long overdue for a president to defend our borders. 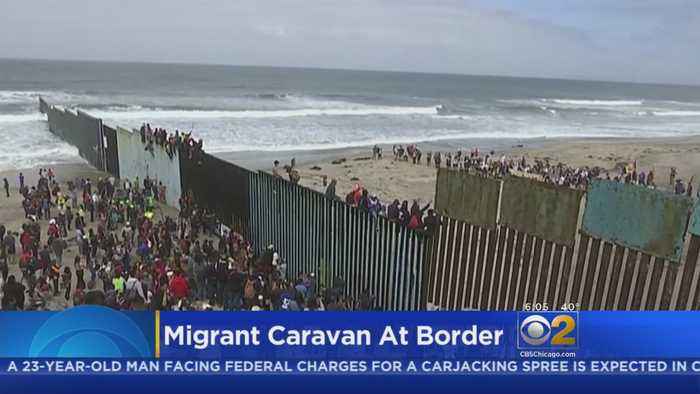 “Getting more dangerous,” Trump tweeted on Easter Sunday before attending church with his wife, Melania, in Palm Beach. “‘Caravan’s coming.”

The president was referring to the “caravan” of some 1,200 men, women and children from Central America, mostly Honduras. They were spotted in southern Mexico on March 25, heading toward the United States.

A “caravan” is a group of migrants traveling together with all their belongings. The word originated in the Middle East centuries ago, but caravans are rarely seen in modern America. However, it’s a different world south of the border, where millions of people live in primitive conditions that would have challenged our ancestors.

A thousand people don’t embark on a journey of over 1,000 miles without organization and financial support. The caravan that made its way through Mexico was coordinated by a group called Pueblo Sin Fronteras [PWEBLO SIN FRON-TARAS], which means Town Without Borders (or People Without Borders). The New York Times described Pueblo Sin Fronteras as a “transnational advocacy group” whose leader, Irineo Mujica [EAR-I-NAY-OO MOO-HIKA], is a “Mexican-American who holds dual citizenship.” There are so many things wrong with those phrases that it’s difficult to know where to start.

To begin with, the United States don’t recognize dual citizenship, except in rare cases. A person from Mexico or anywhere else who goes through the process of becoming a U.S. citizen is required to totally renounce his previous allegiances.

Similarly, a “transnational” group isn’t allowed to exist in many countries without first registering to do business or conduct its activities legally in that country. We have enough problems with the outlaw transnational group called MS-13, which has committed murders of incredible savagery, primarily in areas populated by recent immigrants from Central America.

Join us tomorrow as we discuss the motivation behind this mass migration to the United States. The news may call them “refugees” but the system they’re pursuing seems more rigged than refuge.

What You Need to Know is the Narrative Machine is out of control. It’s truly stunning, the lengths they’ll go to to stop us from talking about … END_OF_DOCUMENT_TOKEN_TO_BE_REPLACED

What You Need to Know is Texas is reopening! Governor Abbott has opened Texas 100% and ended the mask mandate. Texas is a leading state in regards to … END_OF_DOCUMENT_TOKEN_TO_BE_REPLACED

What You Need to Know is to read Gen. Mike Flynn’s statement “America First: Election Integrity and Get Involved.” We must get to the bottom of … END_OF_DOCUMENT_TOKEN_TO_BE_REPLACED

What You Need to Know is the silencing continues. Jim Hoft, founder of TheGateWayPundit.com, has been silenced by Twitter. He’s … END_OF_DOCUMENT_TOKEN_TO_BE_REPLACED

After 40 days offstage, Donald Trump returned to the national spotlight on Sunday, and not a moment too soon. His rip-roaring, 90-minute address to … END_OF_DOCUMENT_TOKEN_TO_BE_REPLACED

What You Need to Know is Trump achieved two things at CPAC: 1) He solidified his leadership of the Republican Party and said that he will not support … END_OF_DOCUMENT_TOKEN_TO_BE_REPLACED

What You Need to Know is the Fake News Media needs Trump! They need a crisis to report on and recently the next best thing from beating on Trump is … END_OF_DOCUMENT_TOKEN_TO_BE_REPLACED