When the Left resorts to digging up someone’s uncle to smear someone, then you know they are getting desperate.  Yet that is the pathetic length to which the Trump-haters are going, to try to stop the most effective adviser in the White House.

Stephen Miller has been the guiding light on President Trump’s agenda to make America safe again after decades of illegal immigration and open borders.  He is extraordinary in how he both writes Trump’s speeches on many topics, while also giving him substantive advice on the most important issues.

It has taken the media awhile to recognize that the low-key Miller is the Rock of Gibraltar in the White House amid the storms that fake news repeatedly creates.  Miller is the one who stayed strong while House Speaker Paul Ryan and other sellouts on Capitol Hill demanded that Trump cave on DACA and other immigration controversies. 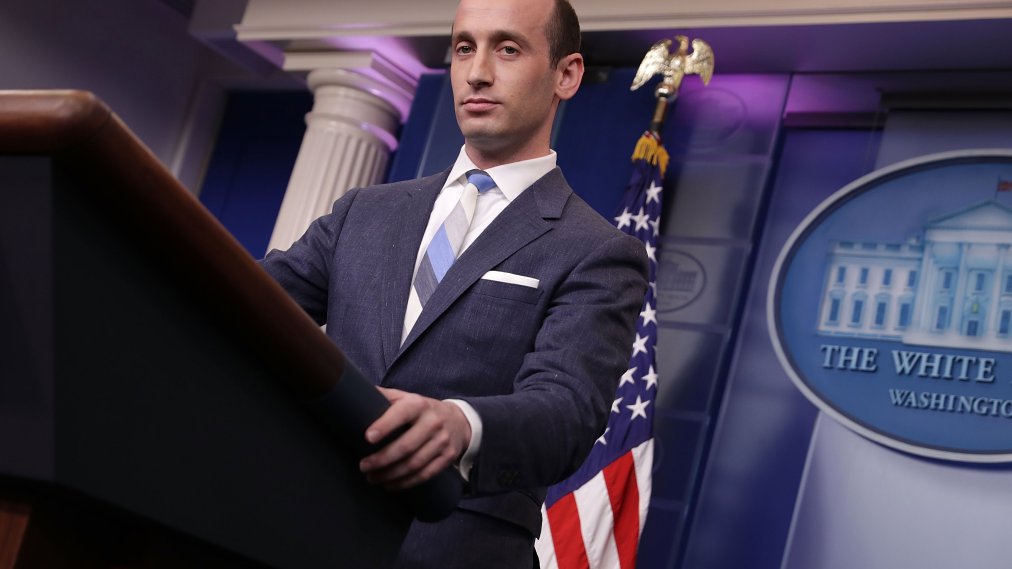 Phyllis Schlafly praised Miller back when he was crafting immigration policy for then-Senator Jeff Sessions of Alabama.  Miller authored detailed, highly effective reports against open borders while he worked for Sen. Sessions, which Phyllis then distributed nationwide.

Significant indeed.  Since then Miller first guided Senator Sessions and then President Trump on the issue, championing the needs of America against those who hate us around the world.

Enter Dr. David S. Glosser, a retired neuropsychologist and Miller’s uncle who wrote a recent article highly critical of his nephew Stephen Miller in Politico.com.  It is unclear if Dr. Glosser knows Miller well enough to criticize him on a personal level; instead, Dr. Glosser relies on how Miller’s maternal grandmother immigrated through Ellis Island more than a century ago without being able to speak English.

But those immigrants worked hard to learn English and assimilate fully into American society, and they raised their children to love America.  Many of the Ellis Island immigrants, like Supreme Court Justice Felix Frankfurter, were highly patriotic and outspokenly supportive of America.

Justice Frankfurter, for example, was so patriotic that he voted against a constitutional right for any schoolchild to refuse to salute the American flag.  The Supreme Court ultimately decided that issue in favor of a First Amendment right not to salute, but the immigrant Justice Frankfurter passionately dissented in support of West Virginia and its mandatory salute to the American flag in public school.

Stephen Miller has described how his experiences at his own public high school helped shape his views.  He quoted President Teddy Roosevelt in his high school yearbook: “There can be no fifty-fifty Americanism in this country.”

Now Stephen Miller is reviving the “public charge” doctrine to reduce public welfare handouts to immigrants.  If someone has been milking the taxpayers for Obamacare and other welfare programs, then why should he be granted American citizenship?

We do not have enough resources in the United States to give perpetual handouts to the rest of the world, and we should not be attracting immigrants who want to live on such entitlements here.  Miller should take sensible steps to tie citizenship to self-reliance, and he does not need approval by Congress to do so.

The Department of Homeland Security confirmed that the Trump Administration “is committed to enforcing existing immigration law, which is clearly intended to protect the American taxpayer by ensuring that foreign nationals seeking to enter or remain in the U.S are self-sufficient.”  The Department added that it “takes the responsibility of being good stewards of taxpayer funds seriously and adjudicates immigration benefit requests in accordance with the law.”

Bravo!  But liberals are howling mad, decrying how this could affect one million people in New York City alone.

Milton Friedman, the Nobel Prize-winning economist, explained decades ago that “in a welfare state … the supply of immigrants will become infinite.”  In other words, the combination of immigration and the welfare state is a recipe for economic disaster.

For example, liberals want Medicare for All, by which they mean all residents, legal and illegal.  That is projected to cost the American taxpayer an astronomical $32.6 trillion over ten years.

President Trump can save us from that by enforcing “public charge” doctrine, by which all participants in such government handouts will be disqualified from obtaining American citizenship.  This will advance Trump’s goal of attracting the best from other countries, not those who are least willing to work.

We are grateful to Stephen Miller for his courageous stance on immigration.  Not even the welcoming poem at the Statue of Liberty invites those who are coming here for a handout.

What You Need to Know is Americans love their dog! If you want to get Americans fired up, go after their dogs! Will Beagles Be the Avenging … END_OF_DOCUMENT_TOKEN_TO_BE_REPLACED

What You Need to Know is the bottom is falling out on the Biden administration. Democrats regularly scare evangelical Christians, Catholics, and other … END_OF_DOCUMENT_TOKEN_TO_BE_REPLACED

What You Need to Know is the immigration invasion is a problem. In the United Kingdom, an Islamic terrorist killed a member of Parliament this past … END_OF_DOCUMENT_TOKEN_TO_BE_REPLACED

Democrats attempt to make transformational changes in the American way of life, but the party’s progressive agenda is not playing well in the upcoming … END_OF_DOCUMENT_TOKEN_TO_BE_REPLACED