Sarah Huckabee Sanders, our wonderful White House Press Secretary, sent liberals into a tizzy in July with her announcement that President Trump was considering revoking the security clearances of several Deep State leaders. John Brennan, a liberal mouthpiece who became Obama’s CIA director after having once voted for the Communist Party for president, would be among the first to lose his security clearance. 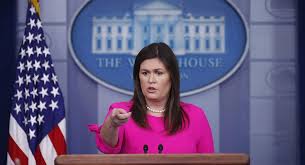 The Left has not panicked so much since the Election Night returns put Donald Trump into the White House.

Another candidate for revocation was Susan Rice, who was Obama’s national security adviser thought to have improperly obtained the identity of General Michael Flynn on a wiretap. The since-replaced national security adviser H.R. McMaster allowed Rice to retain her security clearance, waiving the customary “need-to-know” requirement to allow Rice unlimited access to anything she ever reviewed or received when in office.

In addition to Brennan and Rice, revocation was being considered for the discredited FBI officials James Comey and Andrew McCabe, the former National Security Agency Director Michael Hayden, and the former Director of National Intelligence James Clapper. It was Clapper who famously lied under oath to Congress about his secret surveillance program of Americans.

“They’ve politicized, and in some cases, monetized their public service,” explained Sanders to the media. “Making baseless accusations of an improper relationship with Russia is inappropriate,” Sanders added. “The fact that people with security clearances are making these baseless charges provides inappropriate legitimacy to accusations with zero evidence.” Those who repeatedly make false accusations against our Commander-in-Chief are unfit to be trusted with confidential information about our national security.

The Never-Trumpers will always enjoy their First Amendment rights, but they should not have access to our national secrets while they are writing books and profiting from their irresponsible, false claims about our president.

Americans voted for a new direction for our country under President Trump, in repudiation of the path that Obama was taking us, so why are the losers still around pretending to speak with authority? Many Americans are probably wondering why the security clearances of these acolytes of Obama were not fully revoked long ago.

What You Need to Know is Democrats’ plan to slow down GOP investigations. David Brock (of Media Matters) released a memo detailing a group that will … END_OF_DOCUMENT_TOKEN_TO_BE_REPLACED

Elon Musk has 119 million followers on Twitter, the platform which he just bought for $44 billion. That’s more followers than Taylor Swift, whose … END_OF_DOCUMENT_TOKEN_TO_BE_REPLACED

Phyllis Schlafly Eagles · December 2 | The Past, Present, and Future of the War on Christmas Haul out the holly and bring out the boxing gloves. … END_OF_DOCUMENT_TOKEN_TO_BE_REPLACED

Phyllis Schlafly Eagles · December 1 | We Need More Badges Herschel Walker had an iconic moment in a debate with Sen. Raphael Warnock when he … END_OF_DOCUMENT_TOKEN_TO_BE_REPLACED