“You had to get used to Phyllis being ahead of her time, all the time.” Those are the words of Helen Marie Taylor, Chairman of the Eagle Forum Education and Legal Defense Fund. That could not be illustrated any better than with the very first Phyllis Schlafly Report to be released. In August of 1967, the first PS Report was released with “GIVEAWAY OF OUR PANAMA CANAL: Secret Treaties Imperil U.S. Rights” pasted in bold print across the top of the page. Just as her revolutionary 1964 book A Choice, Not an Echo exposed the secrets of the Republican kingmakers, her first PS Report exposed the secret treaties that promised to undermine American sovereignty and deliver us another humiliating foreign policy defeat on the world stage.

In 1903, President Theodore Roosevelt bought the land to be used for the Panama Canal in exchange for a hefty monetary sum and an agreement to help the Panamanians gain their independence from Columbia. It was understood by everyone involved that America was claiming the ten-mile-wide strip of Panamanian territory “in perpetuity.” However, some Panamanian nationalists still claimed that the Panamanian flag should be flown in the Canal Zone, despite the fact that the Canal Zone was as rightfully American as Kansas. As Phyllis put it in her famous debate with Bill Buckley: “We bought and generously paid for it.” However, the anti-Americans were not content. They rioted in 1959 until President Eisenhower agreed to have the Panamanian flag flown alongside the American flag at a prominent location in the Canal Zone. After a few years, the Panamanians became discontent and started asking to have more Panamanian flags flown in our sovereign territory. President Kennedy capitulated, but that was not enough.

Riots broke out again in Panama in 1964 under President Johnson and the cycle of concessions began anew. The January 10, 1964 issue of the Chicago Tribune recounted the horrors with the headline “Flag Riot in Canal Zone!” The article recounted that “The defense department said Canal Zone police fired 'in self-protection' on 'disorderly mobs' who had invaded the Canal Zone and attacked them.” In total, twenty one Panamanians and four U.S. soldiers were killed in the violence. This set the stage for the secret treaties that Phyllis warned about in her first PS Report. The treaties were eventually signed under President Carter in 1977 and the canal was given as promised on December 31, 1999. In addition, the United States made substantial and humiliating concessions to the Panamanian government.

When Phyllis wrote her first PS Report, she did not know that Donald Trump would become the president of the United States in 2017. However, she did know that we need to embrace the principle of “America First” in our foreign policy. When Bill Buckley asked Phyllis why most Americans did not want to give away the canal, she strongly answered “I know exactly why they’re against this treaty. They’re against this treaty because they see this as a pattern of surrender.” Today, just like in 1967, America is facing a long string of defeats and concessions on the world stage. Donald Trump has echoed the words of Phyllis Schlafly by calling on America to stand up and protect our territory, property, and interests. Phyllis wanted to see us win again.

Even though the crisis at the Panama Canal is over, the message of the August 1967 Phyllis Schlafly Report is far from obsolete. We need to reject the Johnsons, Carters, and Buckleys around us who think that just one more concession will make everyone happy. Phyllis understood that taking a strong, defensive stance on the world stage was the best way to benefit Americans and promote peace around the world. Ronald Reagan called it “Peace through Strength.” As we look back across the long fifty years that stand between us and August 1967, it is very clear to see: Phyllis was right.

To view the August 1967 Phyllis Schlafly Report in its entirety, please click on the image below. 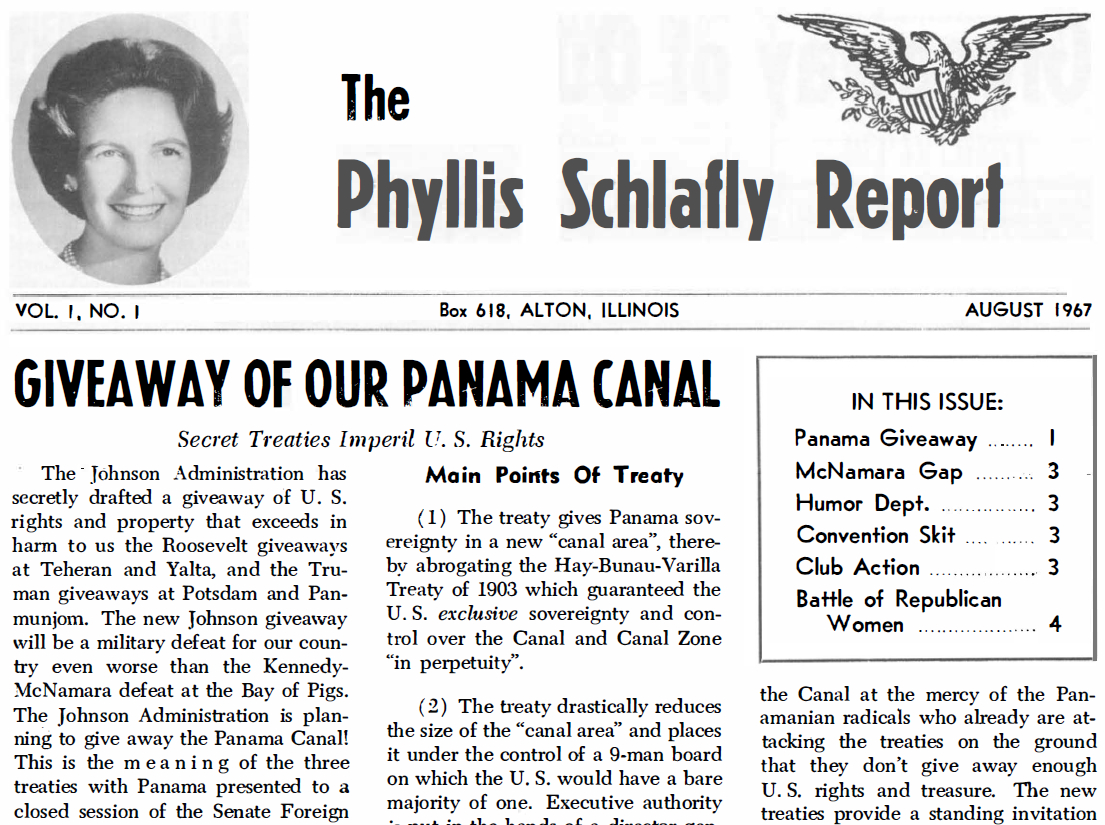 Biden’s Plan to Buy Votes  As the midterm elections fast approach, Democrats have lost a key demographic that they relied on in 2020: … END_OF_DOCUMENT_TOKEN_TO_BE_REPLACED

What You Need to Know is Montpelier is going Woke. Soledad O’Brien is now on the board of directors of Montpelier, James Madison’s home. She is part … END_OF_DOCUMENT_TOKEN_TO_BE_REPLACED

Phyllis Schlafly Eagles · May 10 | Politicians Are "Tossed To and Fro" on Energy Policy Ephesians 4:14 in the Bible calls for Christians … END_OF_DOCUMENT_TOKEN_TO_BE_REPLACED

Phyllis Schlafly Eagles · #WYNK: Montpelier is going Woke | May 19, 2022 #ProAmericaReport The following is a transcript from the Pro America … END_OF_DOCUMENT_TOKEN_TO_BE_REPLACED

What You Need to Know is our election system is broken! It's failing and We the People have no confidence in the system. Pennsylvania has shown again … END_OF_DOCUMENT_TOKEN_TO_BE_REPLACED

Phyllis Schlafly Eagles · May 9 | How To Remake A Political Party Remaking a political party is difficult, but essential now as the entrenchment of … END_OF_DOCUMENT_TOKEN_TO_BE_REPLACED

Phyllis Schlafly Eagles · May 23 | Leftism Weakens America Thanks in large part to the culture of the mainstream media, many people have tunnel … END_OF_DOCUMENT_TOKEN_TO_BE_REPLACED