In pardoning Sheriff Joe Arpaio, President Trump illustrated why he is a cut above other politicians. Without waiting for judicial activism to drag on for years in the Ninth Circuit, Trump used his constitutional authority to stop the long-running witch-hunt against a good man who has devoted 50 years to law enforcement. 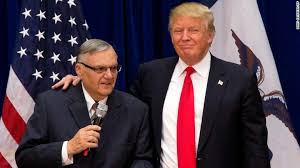 Trump’s pardon of Sheriff Joe was the kind of Trumpesque move that millions of Americans have been waiting for. Trump acted on his own instincts, and perhaps even against his legal advisers who have been urging him to adapt to business-as-usual in D.C.

Trump’s audacious pardon confirmed why Phyllis Schlafly saw in Donald Trump something she had not seen in any other presidential candidate in many years. Sheriff Joe is hated by the kingmakers who want open borders, and Trump’s pardon delivered a stunning setback to their globalist agenda.

In 2012, Phyllis wrote about how the pro-amnesty crowd waged an expensive campaign that year to defeat Sheriff Joe, but he won his reelection at the age of 81. Sheriff Joe stood up against Obama, and liberals have been determined for years to punish Joe.

The ACLU did not like Sheriff Joe’s approach to illegal immigration, and they used the federal courts to take punitive action against him. Without the benefit of a jury trial, a federal judge held that the publicly elected Sheriff Joe was in criminal contempt in how he did his job in protecting the American people against illegal aliens.

The court ruling was contrary to the testimony of every witness in Sheriff Joe’s civil case. Sheriff Joe, now age 85, faced six months in jail and further litigation that would bankrupt him.

Although the presidential power to pardon is clear, criticism of Trump has ranged from the inane to the absurd. Some even objected that President Trump issued his pardon of Sheriff Joe during Hurricane Harvey. Trump pointed out to a hostile press corps that President Clinton issued many pardons of shady characters. Obama, for his part, granted a record number of commutations while he was president, none as distinguished as Sheriff Joe.

What You Need to Know about the January 6th prisoners. It seems like those who were arrested because of their involvement on Jan. 6th are being held … END_OF_DOCUMENT_TOKEN_TO_BE_REPLACED

What You Need to Know is Republicans cave on gun rights. Senate Republicans have put on full display the ruling class uniparty by compromising with … END_OF_DOCUMENT_TOKEN_TO_BE_REPLACED

What You Need to Know is Who’s against Trump. This select committee for Jan 6th is a dangerous kangaroo court. It's really just a show trial and we … END_OF_DOCUMENT_TOKEN_TO_BE_REPLACED

Phyllis Schlafly Eagles · #WYNK: Cartels Control the Border | June 6, 2022 #ProAmericaReport The following is a transcript from the Pro America … END_OF_DOCUMENT_TOKEN_TO_BE_REPLACED

By Mason Mohon, Phyllis Schlafly Eagles Intern Abortion is the most controversial issue in the United States today, with both sides having great … END_OF_DOCUMENT_TOKEN_TO_BE_REPLACED

For Immediate Release: June 24, 2022Contact: Ryan Hite, Communications Director Now Is The Time to Stand Up for Moms and Babies Without … END_OF_DOCUMENT_TOKEN_TO_BE_REPLACED