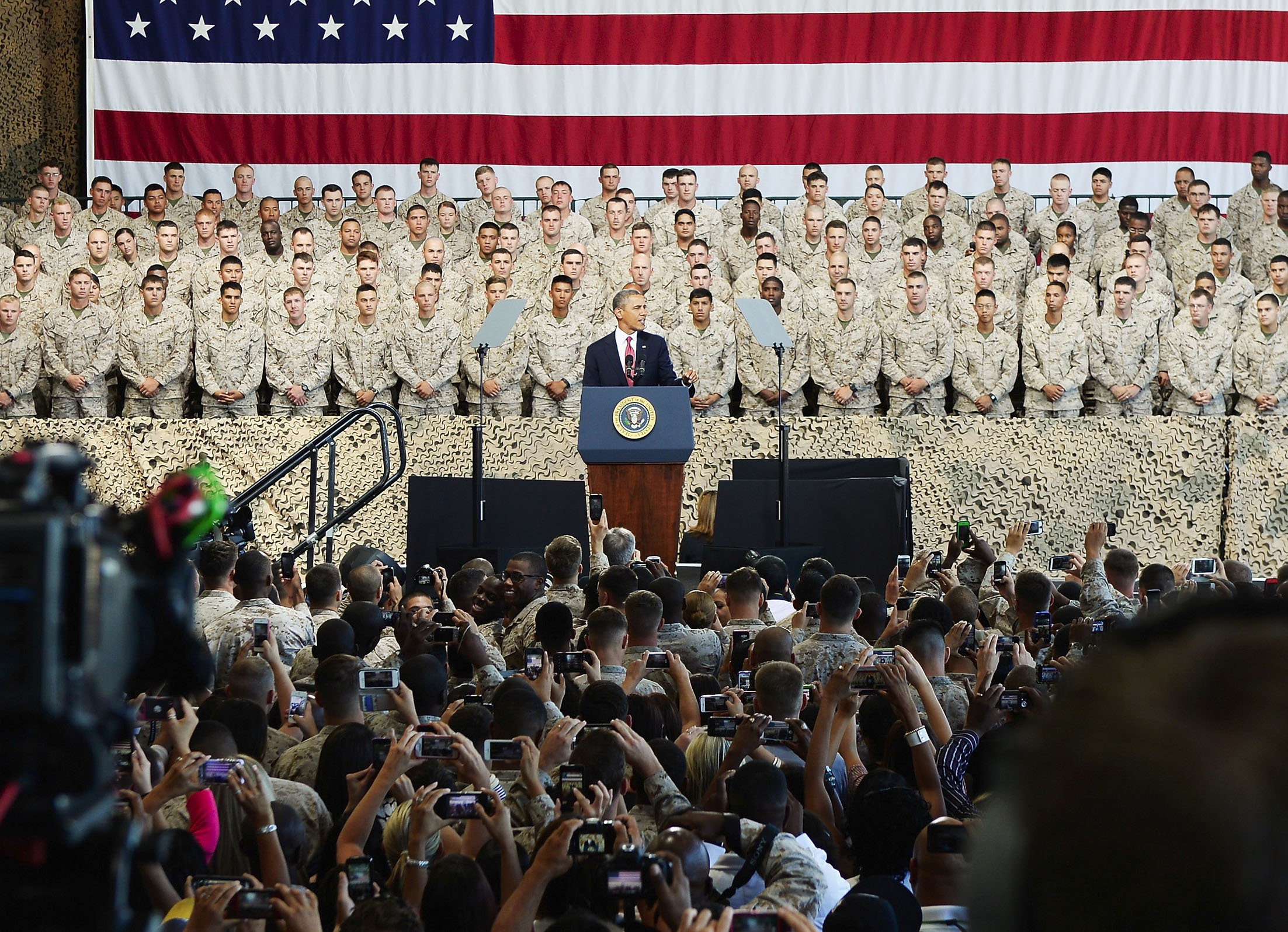 The takeover of Fallujah by Al Qaeda wipes out our costly 2004 victory when we captured Fallujah at the cost of 100 Marines and soldiers killed in action and hundreds more wounded. Fallujah isn’t just an Obama mistake; it’s the exemplar of Obama’s disastrous foreign and military policies designed to reduce the power and prestige of America on the world stage.

When Obama told Joe the plumber that Obama wanted to “spread the wealth around,” that was only part of his plan. He also wants to spread power around to achieve his we-are-all-equal worldview.

Just as Obama thinks it is unfair that the United States enjoys a higher standard of living than the rest of the world (even though we earned it), he thinks it is unfair that America has more military power than other countries. When he talks about his goal of “fundamentally transforming” the United States, he means he wants to reduce both our economic and our military superiority.

Obama has failed miserably to negotiate Iran out of its steady progression toward becoming a nuclear nation. It’s been a year and a half since the Benghazi murders of our Ambassador and three other Americans, but nobody has paid a price and they remain unavenged.

Afghanistan is releasing 72 prisoners the U.S. says are a security threat to the United States. Syria is in chaos, South Sudan has fallen into civil war, and Al Qaeda now controls more territory in the Arab world than at any time in history, an area that stretches more than 400 miles across the heart of the Middle East.

Most of what Obama says is carefully scripted by his handlers and placed on the teleprompter for him to read. When Obama is caught without a teleprompter, we get some insight on how radical he really is.

That is what happened at the summit in South Korea in 2012 when Obama was heard on an open mic saying to the Russian President Dmitry Medvedev: “On all these issues, but particularly missile defense, this, this can be solved but it’s important for him to give me space. … This is my last election. After my election I have more flexibility.” Medvedev replied, “I will transmit this information to Vladimir.”

That colloquy tells us all we need to know about Obama’s plan to destroy America’s military superiority. Obama felt that, after his reelection, he would no longer be accountable to the American public on “particularly missile defense,” which Obama has always opposed.

The United States has always had anti-missile superiority, a priceless protection against the murderous aims of Iran, Communist China and North Korea. Russia has been trying to get us to abandon it ever since the days of Ronald Reagan, and his steadfast refusal to give it up at the Reykjavik summit with Gorbachev was a major factor in Reagan’s winning the Cold War.

Robert Gates’ new book describes an ambivalent commander-in-chief who did not believe in his own military buildup in Afghanistan, and mainly just wanted to get out of Iraq. Gates says the only military matter “about which I ever sensed deep passion on his part was ‘Don’t Ask, Don’t Tell,’” the law disliked by the gays that Obama got Congress to repeal.

Our friends are wondering why our President has deliberately reduced American power and influence to levels of the 1930s and turned his back on U.S. supporters and allies. He has openly made nice with adversaries such as the Muslim Brotherhood and Tehran’s ayatollahs, and allowed Chinese penetration to rise to higher and higher levels.

This is not just a series of mistakes or bad luck. Obama’s plan is to reduce American influence and prestige because he thinks we are too dominant in the world, and military power should be redistributed just as he wants to spread the wealth around inside our country. Our allies are dismayed by Obama’s foolish abandonment of our preeminent military strength because they depend on us for their own security.

Americans will have to depend on the election of U.S. Senators in November who commit to uphold the 2012 Republican Party Platform: “We are the party of peace through strength…. American military superiority has been the cornerstone of a strategy that seeks to deter aggression or defeat those who threaten our national security interests.”

What You Need to Know is balloons in our hemisphere. As the Chinese weather balloon (read: spy balloon) passes over America, it’s a great time to … END_OF_DOCUMENT_TOKEN_TO_BE_REPLACED

Phyllis Schlafly Eagles · #WYNK: Trump is Stronger Than Biden | January 27, 2023 #ProAmericaReport The following is a transcript from the Pro … END_OF_DOCUMENT_TOKEN_TO_BE_REPLACED

Phyllis Schlafly Eagles · February 8 | Leftist Hollywood's Downward Spiral Looking back on 2022, it is plain to see that Democrat-dominated … END_OF_DOCUMENT_TOKEN_TO_BE_REPLACED