Conservatives should never lose focus of the important work that lies before us. Yet, it is also important to look behind us and see how far we have come. One excellent example of this is recent North Korea relations. In just one short year, President Trump has done the impossible. He brought the world’s most isolated nation to the negotiation table. Not since the days of Ronald Reagan has a president brought the world back from the brink of nuclear war, despite major pressure on all sides. This monumental Trump victory did not happen by accident. Let’s consider how he did it. 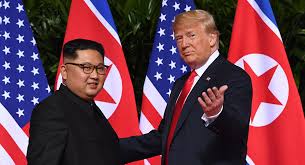 Just like with Reagan, the Left pushed Trump to kowtow to the demands of a foreign bully. Many liberals wanted to see a repeat of the Iran Deal disaster. Yet, President Trump knew how to get a deal. Responding to North Korean aggression, Trump called Dictator Kim Jong Un “Little Rocket Man.” He assured Kim that any nuclear strike against the U.S. would be “met with fire and fury like the world has never seen.” Trump faced endless criticism for this action, but he stood firm. He also put sanctions on North Korea and got the UN to do the same.

Finally, Kim capitulated. He came to us begging for a summit to take place so the pressure could be lifted. Graciously, Trump agreed to meet. When Kim started trying to act tough and insult our vice president, Trump made the inspired decision to call off the summit. Once again, Kim came begging for us to resume the summit, leaving us in a better bargaining position than ever before.

We all know how that turned out. Trump met with Kim and made a historic deal to ease tensions on the Korean Peninsula. Despite endless negative press, threats, and insults, he held firm in his convictions and eventually won an unprecedented victory. As the conservative movement goes forward, we need to maintain the spirit President Trump displayed in the North Korea situation. Let us never forget the victories that are before us if we only stand strong and resist the pressure of the Left.

What You Need to Know is Montpelier is going Woke. Soledad O’Brien is now on the board of directors of Montpelier, James Madison’s home. She is part … END_OF_DOCUMENT_TOKEN_TO_BE_REPLACED

Phyllis Schlafly Eagles · May 9 | How To Remake A Political Party Remaking a political party is difficult, but essential now as the entrenchment of … END_OF_DOCUMENT_TOKEN_TO_BE_REPLACED