DACA was announced in 2010 by executive action, Barack Obama insisted that it was not amnesty but merely a two-year reprieve and work permit with no guarantee of renewal. Obama’s unilateral executive action had no legitimate continuing legal authority, but a lawsuit brought by Harvard Law professor Laurence Tribe claims that it’s somehow unconstitutional for Trump to discontinue the program. 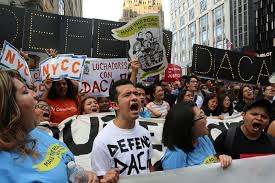 A growing pattern among Trump’s opponents and the agenda the American people voted for is to file a lawsuit in a district court located within a Court of Appeals that is overwhelmingly Democratic-appointed judges. Hotspots include the Ninth, Fourth, Second, and D.C. Circuits. There are at least five lawsuits now filed against Trump over DACA.

That strategy generally ensures a ruling against President Trump at both the district and appellate court levels. This game by the Left has continued even though the U.S. Supreme Court has repeatedly slapped down and reversed the liberal lower court rulings, and held in favor of Trump, often unanimously.

Anti-Trumpers are even filing numerous briefs challenging President Trump’s pardon of Sheriff Joe Arpaio. The power of a president to pardon has traditionally been fully supported and even promoted by the political Left, and was used flagrantly by Presidents Obama and Clinton.

If these DACA suits weren’t enough, there are multiple lawsuits challenging the prudent action by Attorney General Jeff Sessions to withhold a small amount of federal funding from cities that defy federal law by declaring themselves to be “sanctuary cities” for illegal aliens. Even though federal power is at its peak in how it spends money, a federal district court in Chicago just last Friday issued an extraordinary nationwide preliminary injunction blocking the Trump Administration from implementing its plan to withhold federal taxpayer dollars from sanctuary cities.

The will of the American people is to protect our borders and to deport illegal aliens who should not be here. Crime and the burdens on entitlement programs are immense and Trump should not be blocked by the courts from taking action to defend our sovereignty.

What You Need to Know is Ray Epps was in on it! Who is Ray Epps? Congressman Jamie Raskin gave us the answer after the prompting by Congressman Thomas … END_OF_DOCUMENT_TOKEN_TO_BE_REPLACED

What You Need to Know to Understand is the danger of the Narrative Machine! Read this article from Tablet Magazine to help understand the connection … END_OF_DOCUMENT_TOKEN_TO_BE_REPLACED

What You Need to Know is Martha’s Vineyard CNN coverage is funny! 'They enriched us.' Migrants' 44-hour visit leaves indelible mark on Martha's … END_OF_DOCUMENT_TOKEN_TO_BE_REPLACED

What You Need to Know is the media is finally reporting on the Southern Border! Governor Ron DeSantis and Governor Greg Abbott are forcing the media … END_OF_DOCUMENT_TOKEN_TO_BE_REPLACED

Phyllis Schlafly Eagles · #WYNK: Who Is Congressman Troy Nehls? | September 28, 2022 #ProAmericaReport The following is a transcript from the Pro … END_OF_DOCUMENT_TOKEN_TO_BE_REPLACED

What You Need to Know is The Narrative Machine is Obsessed with Trump! First, it used to be called the Trump Exhaustion Syndrome now the left is … END_OF_DOCUMENT_TOKEN_TO_BE_REPLACED