Democrats have not been shy to criticize President Trump on every imaginable issue ranging from the NFL to the First Lady’s choice of footwear.  But when Trump messaged on the caravan of illegal aliens headed toward our southern border in November, Dem criticism was nowhere to be found.

“Every time you see a Caravan, or people illegally coming, or attempting to come, into our Country illegally, think of and blame the Democrats for not giving us the votes to change our pathetic Immigration Laws! Remember the Midterms!” Trump tweeted the day before Midterm Elections. But where was the pervasive Democratic pushback to these Tweets?  Their silence was deafening. 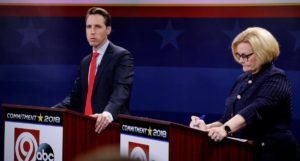 In Missouri, entrenched liberal incumbent Claire McCaskill was so rattled by Republican challenger Josh Hawley’s criticism of her during their final debate that she quickly and awkwardly left, not even staying for post-debate interviews.

The Senate race in Arizona casts light on why Democrats were suddenly speechless. That seat, vacated by unelectable never Trumper Jeff Flake, has long been considered a sure Democratic flip from Republicans in the battle to control the Senate. This summer, Democratic candidate Kyrsten Sinema was ahead in the polls by more than ten points, cruising to an apparent landslide.  But Arizona bears the brunt of illegal immigration, and as that issue heated up – Arizona became too close to call.

Congresswoman and veteran Martha McSally, was greatly aided by support from President Trump, and surged in the polls during the final weeks.

In Missouri, entrenched liberal incumbent Claire McCaskill was so rattled by Republican challenger Josh Hawley’s criticism of her during their final debate that she quickly and awkwardly left, not even staying for post-debate interviews.  Pro-abortion donors bankrolled McCaskill to a 4-1 fundraising advantage, and yet she lost to Josh Hawley by nearly 6 points on Election night.

Voters watched photos and videos of thousands of menacing youths approaching our southern border as part of that caravan stretching for miles. Americans saw new recruits for violent gangs like MS-13 that plague our cities. If Sen. McCaskill and her Democratic cohorts had supported the wall, this massive caravan would not have been a national crisis. Likewise, so many high-polling Democratic victories might not have swayed Republican in the end. Americans know the weakness of globalism when they see it, and they renounced it in many key races last month.

What You Need to Know is why Trump is not an echo of other candidates before him. Phyllis Schlafly famously first used that phrase — a choice, … END_OF_DOCUMENT_TOKEN_TO_BE_REPLACED

What You Need to Know is why Trump is not an echo of other candidates before him. Phyllis Schlafly famously first used that phrase — a choice, not an … END_OF_DOCUMENT_TOKEN_TO_BE_REPLACED

Phyllis Schlafly Eagles · December 2 | The Past, Present, and Future of the War on Christmas Haul out the holly and bring out the boxing gloves. … END_OF_DOCUMENT_TOKEN_TO_BE_REPLACED