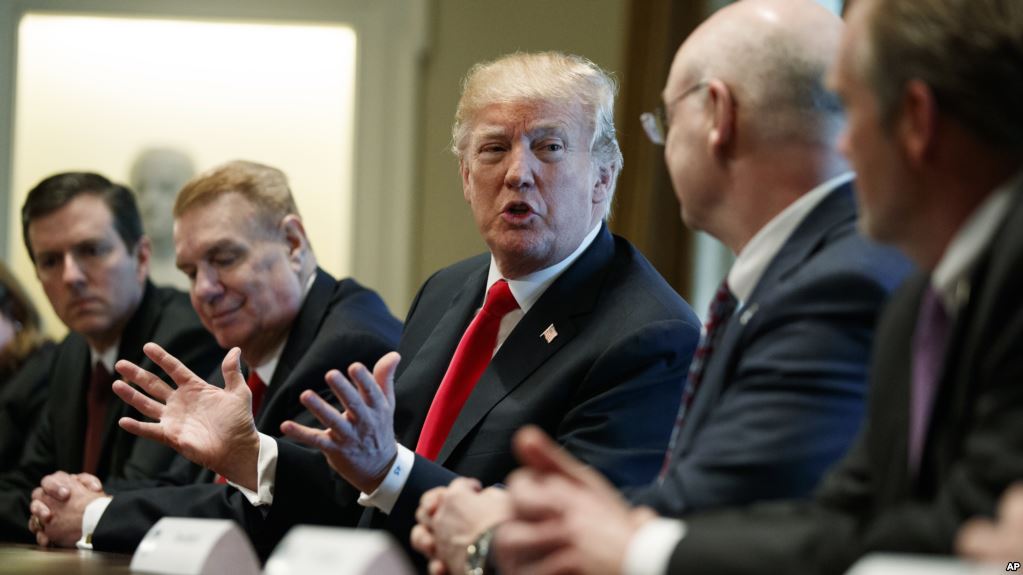 When President Trump announced he would protect American jobs by imposing tariffs on foreign-made steel and aluminum, naysayers of both parties rushed to the nearest microphone or TV camera. Pundits and politicians alike pretended to be “shocked, shocked” that Trump meant what he said as a candidate, and that he actually means to deliver what he promised during the campaign.

The Swamp, in short, is not happy. But cheers rose from the manufacturing belt that runs through the states that put Trump in the White House: Pennsylvania, Ohio, Michigan, Indiana, Wisconsin, and Iowa.

“This is a good thing for the steel industry and for our country,” said Tim Timken, the fifth-generation leader of TimkenSteel, which has 3,000 employees in Ohio. “We’re standing up to our foreign competition and essentially saying enough is enough,” he added.

foreign lobbyists warned of a new “trade war” in which other countries retaliate against the United States, U.S. Steel CEO David Burritt pointed out that “We are, and have been, in a trade war for decades. Countries which have economically prospered by creating our current trade imbalance will face repercussions to their own economies if they choose the path of retaliation.”

“And what do we get for that?” Navarro asked. “We get every year a half-trillion-dollar trade deficit that transfers our wealth to other countries and basically offshores our jobs and our factories. All we are asking for is fair and reciprocal trade.”

The rest of the world wants unlimited access to the American consumer without complying with American regulations and without paying American taxes. “Under my administration,” Trump boasted in his speech to CPAC last month, “the era of economic surrender is over.”

“We’re renegotiating trade deals that are so bad, whether it’s NAFTA, whether it’s the World Trade Organization, which created China. China has been like a rocket ship ever since, and last year we had almost a $500 billion trade deficit with China” â€• money that finances the growing Chinese military.

Similarly, tariffs help level the playing field between offshore manufacturers that escape the extra burdens and costs of operating a business in America and providing jobs to Americans. Requiring those foreign companies to pay more for the privilege of selling to American consumers is perfectly logical given how the foreigners have not been paying American taxes or complying with our regulations.

The resistance to tariffs comes from the same never-Trumpers who assured us that Trump could never be nominated or elected. Peter Navarro noted that nearly all the other presidential candidates opposed Trump on trade, but “guess what? He beat them.”

Thirty years ago, when Donald Trump was in his early 40s, his views on trade were much the same as they are now. He told Larry King that he was “tired of watching other people ripping off the United States.” He told Oprah, “I’d make our allies pay their fair share.”

Trump told Letterman that nations such as Japan have “totally taken advantage of the country. I’m talking about the [trade] deficits. They talk about free trade [but] they dump the cars and everything else.”

Just as entrenched politicians in D.C. have blocked Trump’s efforts to build a Wall, they also protest too much at his effort to impose a few tariffs. Yet the approach of a tariff-less society has been a catastrophic failure for the American worker, so it is time to try the approach that originally made our country great.

Phyllis Schlafly Eagles · #WYNK: China's Hooking Us on Fentanyl, TikTok | October 18, 2022 #ProAmericaReport The following is a transcript from the … END_OF_DOCUMENT_TOKEN_TO_BE_REPLACED

Proving once again that he is in touch with ordinary Americans, Donald Trump selected education for the first video message of his 2024 presidential … END_OF_DOCUMENT_TOKEN_TO_BE_REPLACED

Phyllis Schlafly Eagles · #WYNK: Trump's Record is Baked In | January 30, 2023 #ProAmericaReport The following is a transcript from the Pro … END_OF_DOCUMENT_TOKEN_TO_BE_REPLACED

Phyllis Schlafly Eagles · February 8 | Leftist Hollywood's Downward Spiral Looking back on 2022, it is plain to see that Democrat-dominated … END_OF_DOCUMENT_TOKEN_TO_BE_REPLACED