When President Trump announced his decision to wind down DACA, which protects illegal aliens who came to America before their 18th birthday, Democratic leaders were secretly pleased. They thought DACA gave them a way to defeat the President, and compel him to cave in on the issue in order to avert a government shutdown just before Christmas. 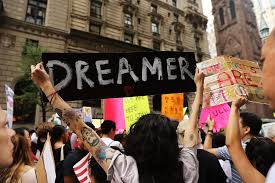 The Deferred Action for Childhood Arrivals (DACA) was created by a stroke of President Barack Obama’s pen in 2012, even after Obama said 22 times that he lacked the power to do that. DACA provided a two-year work permit with a valid Social Security number to around 800,000 illegal aliens, a number that has since dropped through attrition to about 690,000.

No one denies that Trump has the power to rescind an executive order by his predecessor, but many were misled by polls showing that DACA is a popular program. Depending on how the question is asked, polls show many Americans sympathize with the plight of young people who were supposedly brought here through no fault of their own.

But the real poll is on Election Day, and Donald Trump was elected president primarily because of his commitment to control our borders and reduce immigration. If Trump could be rolled by the media on his signature issue, it would undermine his presidency and make it that much easier for Democrats to defeat the rest of the Trump agenda.

Thinking they had Trump on the defensive, Democrats laid plans to expand DACA from a two-year work permit for 700,000 people all the way to permanent residency for some 4 million illegal residents. Democrats felt so confident that they would win on the DACA issue that they started posturing already for how to expand its amnesty to include many millions.

For more than 50 years, America’s immigration policy has been set by an unholy alliance between liberal Republicans, who seek to please their donors with access to cheap labor, and Democrats in search of more votes for their progressive agenda. Under the Trump administration, that corrupt bargain is finally coming to an end.

What You Need to Know is Title 42 is about to expire! What is your preference? Do you prefer we have a secure border and decide who we let in? Or that … END_OF_DOCUMENT_TOKEN_TO_BE_REPLACED

What You Need to Know Feminists don’t what they are doing! They are about to make another marketing error by utilizing all the wrong imagery and … END_OF_DOCUMENT_TOKEN_TO_BE_REPLACED

Phyllis Schlafly Eagles · May 9 | How To Remake A Political Party Remaking a political party is difficult, but essential now as the entrenchment of … END_OF_DOCUMENT_TOKEN_TO_BE_REPLACED

Phyllis Schlafly Eagles · May 19 | Boys and Girls and Grades? ** Previously recorded by Phyllis Schlafly // May 2015 ** Colleges claim they … END_OF_DOCUMENT_TOKEN_TO_BE_REPLACED