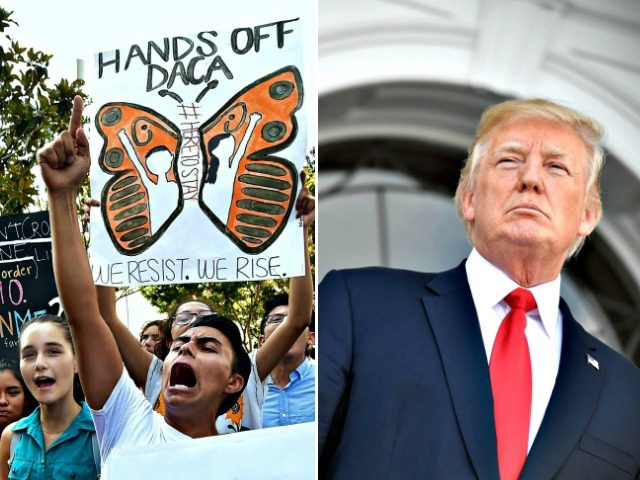 When President Trump announced his decision to wind down DACA, which protects illegal aliens who came to America before their 18th birthday, Democratic leaders were secretly pleased. They thought DACA gave them a way to defeat the President, and compel him to cave in on the issue in order to avert a government shutdown just before Christmas.

The Deferred Action for Childhood Arrivals (DACA) was created by a stroke of President Barack Obama’s pen in 2012, even after Obama said 22 times that he lacked the power to do that. DACA provided a two-year work permit with a valid Social Security number to around 800,000 illegal aliens, a number that has since dropped through attrition to about 690,000.

No one denies that Trump has the power to rescind an executive order by his predecessor, but many were misled by polls showing that DACA is a popular program. Depending on how the question is asked, polls show many Americans sympathize with the plight of young people who were supposedly brought here through no fault of their own.

But the real poll is on Election Day, and Donald Trump was elected president primarily because of his commitment to control our borders and reduce immigration. If Trump could be rolled by the media on his signature issue, it would undermine his presidency and make it that much easier for Democrats to defeat the rest of the Trump agenda.

Thinking they had Trump on the defensive, Democrats laid plans to expand DACA from a two-year work permit for 700,000 people all the way to permanent residency for some 4 million illegal residents. Democrats felt so confident that they would win on the DACA issue that they started posturing already for how to expand its amnesty to include many millions.

Now Democrats are making similar threats about extending DACA as a condition for the next budget deadline on January 19, but the terms of the debate have changed. Instead of DACA and the Dream Act, Trump has forced public attention on chain migration.

Between Christmas and New Year’s Eve, Trump served notice via Twitter about the new deal that Democrats would face in the new year: “There can be no DACA without the desperately needed WALL at the Southern Border,” he warned, “and an END to the horrible Chain Migration & ridiculous Lottery System of Immigration etc. We must protect our country at all cost!”

A helpful web page was created by the White House to elaborate on the president’s tweet. According to this page at whitehouse.gov, chain migration is “the process by which foreign nationals permanently resettle in the U.S. and subsequently bring over their foreign relatives, and so on, until entire extended families are resettled within the country.”

The numbers are huge. On average, according to the White House, “every 2 new immigrants bring 7 additional foreign relatives to permanently resettle in the U.S.”

In just the last ten years, some 9.3 million people have been allowed to settle permanently in the United States solely because of their familial ties to another immigrant. That’s more than the total population of Los Angeles, Chicago, Dallas, San Francisco, and Cleveland – combined.

“This system of chain migration – whereby one immigrant can bring in their entire extended families, who can bring in their families and so on – de-skills the labor force, puts downward pressure on wages, and increases the deficit,” explains the White House website. The Trump administration is absolutely correct that low-skill immigrants increase the fiscal deficit by consuming more in benefits than they pay in taxes.

Chain migration “de-skills the labor force” because those immigrants, on average, have lower or fewer skills than the Americans who are already here and struggling to find adequate employment. While the vast majority of immigrant green cards were based on family ties, only 6 percent were issued on the basis of skills.

Despite low unemployment figures being reported, as President Obama’s chief economic adviser Jason Furman recently wrote in the Wall Street Journal, “some 9 million men of prime age – that is, between 25 and 54 – still are not working.” Furman ignored immigration, but it’s not just a coincidence that 9 million men exited the labor force during the same period that 9.3 million low-skill immigrants settled in the United States.

“The bulk of the decline in employment,” Jason Furman continued, “has been for men with a high-school diploma or less, who have seen their employment rates fall from 97% in 1964 to 83% today.” That’s the same group that is most harmed by the policy of allowing low-skill immigrants to come here and fight for the same jobs.

For more than 50 years, America’s immigration policy has been set by an unholy alliance between liberal Republicans, who seek to please their donors with access to cheap labor, and Democrats in search of more votes for their progressive agenda. Under the Trump administration, that corrupt bargain is finally coming to an end.

What You Need to Know is Ray Epps was in on it! Who is Ray Epps? Congressman Jamie Raskin gave us the answer after the prompting by Congressman Thomas … END_OF_DOCUMENT_TOKEN_TO_BE_REPLACED

What You Need to Know to Understand is the danger of the Narrative Machine! Read this article from Tablet Magazine to help understand the connection … END_OF_DOCUMENT_TOKEN_TO_BE_REPLACED

What You Need to Know is Martha’s Vineyard CNN coverage is funny! 'They enriched us.' Migrants' 44-hour visit leaves indelible mark on Martha's … END_OF_DOCUMENT_TOKEN_TO_BE_REPLACED

What You Need to Know is the media is finally reporting on the Southern Border! Governor Ron DeSantis and Governor Greg Abbott are forcing the media … END_OF_DOCUMENT_TOKEN_TO_BE_REPLACED

Phyllis Schlafly Eagles · September 28 | The Politicization of the School Lunchroom There are all kinds of labels on food these days. You may have … END_OF_DOCUMENT_TOKEN_TO_BE_REPLACED