Phyllis Schlafly sounded the warning of what future was in store for our nation if illegal immigration was allowed to continue unhindered. She warned of millions of illegals flooding into the country, border agents being killed by drug cartels, Establishment Republicans voting for cheap labor over American jobs, and a particularly nasty gang called MS-13. If you have watched the news lately, you know that all of those terrible things are happening just as Phyllis predicted they would. 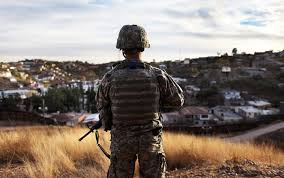 In the 2016 presidential election, the American people decided that they wanted to take back control of their southern border. The first step toward taking that control is to build the wall.

Liberal excuses about its meager cost cannot deter the American people in their clamoring for a wall on the southern border. They do not want some token temporary increase in border control agents either. They want a real wall that will really stop people from making the illegal crossing. Too many border patrol agents and simple American citizens living along the border have lost their lives to merciless criminal drug lords and their lackeys who would sooner kill American citizens than give up a shipment of drugs. This has got to stop and the wall is the way to make it happen.

In the March 2006 Phyllis Schlafly Report, Phyllis specifically warned of the rise of a gang called Mara Salvatrucha, or MS-13. This group that few Americans had heard of in 2006 has become the very face of why Americans want secure borders. They have grown by ten thousand members since the PSR first reported on them in 2006.

If the United States is to be a refuge for anyone, American or otherwise, we must build a wall to keep out these dangerous criminals. We should accept no immigrants who have not been thoroughly vetted for ties to gangs like MS-13. As people like Attorney General Jeff Sessions fight every day to deal with the fallout from illegal immigrants, the American people need to let our elected officials know that we want unvetted immigrants kept out in the first place.

What You Need to Know Feminists don’t what they are doing! They are about to make another marketing error by utilizing all the wrong imagery and … END_OF_DOCUMENT_TOKEN_TO_BE_REPLACED

What You Need to Know is American drug overdose deaths hit a new record. We are up to 107,000 Americans who have died in the last year because of … END_OF_DOCUMENT_TOKEN_TO_BE_REPLACED

“He was definitely into video games - shooter games,” a classmate observed about the Buffalo grocery-store mass murderer. A British tabloid reported … END_OF_DOCUMENT_TOKEN_TO_BE_REPLACED