A fable is told of a young Dutch boy who saved his country by plugging a hole in a dike with his finger. As the story goes, had the leak not been stopped, the hole would have gotten larger and eventually broken the entire dike. The United States faced a similar problem on our southern border in March 2006. Phyllis Schlafly passionately sounded the warning of what future was in store for our nation if illegal immigration was allowed to continue unhindered. She warned of millions of illegals flooding into the country, border agents being killed by drug cartels, Establishment Republicans voting for cheap labor over American jobs, and a particularly nasty gang called Mara Salvatrucha, or MS-13. If you have been watching the news lately, you know that all of those terrible things are happening just as Phyllis predicted they would eleven years ago. The hole in the dam of border security may have widened, but it is not too late to plug the hole. Let’s take a look at the March 2006 Phyllis Schlafly Report and gain more insight into these dire divinations.

In the 2016 presidential election, the American people decided that they wanted to take back control of their southern border. The first step toward taking that control is to build the wall. Estimates of how much building the wall would cost vary wildly depending on who you ask, but a lot of that should be ironed out within the next few months as different wall designs are tested. However, even the very highest estimates for the wall’s price only reach a little over twenty billion dollars. While that number is certainly nothing to scoff at, it is a relatively small number compared to some of the other line items on the national budget. Most will remember a few months ago when HUD Secretary Ben Carson uncovered 500 billion dollars in accounting errors in his department alone. That is not the only place this mismanagement is going on. According the the U.S. Treasury Department, the 2016 fiscal year resulted in 11.7 billion dollars being spent on “unmatched transactions and balances.” That figure encapsulates money that was spent somewhere on something and not even the Treasury knows what it was. Just two years earlier in FY2014, those “unmatched transactions” totaled 20.4 billion dollars, which is roughly the same as liberal estimates of the wall’s cost. That means the wall could be paid for just by figuring out what happened to all of the money that is unaccounted for in a given year. Of course, with President Trump doing so much to grow the economy and secure better trade deals with countries like Mexico, there are likely to be plenty of sources from which to draw the money for the wall in the near future.

Liberal excuses about its meager cost cannot deter the American people in their clamoring for a wall on the southern border. They do not want some token temporary increase in border control agents either. They want a real wall that will really stop people from making the illegal crossing. Too many border patrol agents and simple American citizens living along the border have lost their lives to merciless criminal drug lords and their lackeys who would sooner kill American citizens than give up a shipment of drugs. This has got to stop and the wall is the way to make it happen. Certainly, a wall will not stop all tragic attacks on border agents, but the same could be said of any safety device. Should we stop buying bulletproof vests for law enforcement just because they will not stop all bullets? What about people in car accidents who are not saved by seatbelts? Any rational person would say that we should take every measure possible to shield our border agents and those citizens living along the border from the dangers of Mexican drug cartels.

In the March 2006 Phyllis Schlafly Report, Phyllis specifically warned of the rise of a gang called Mara Salvatrucha, or MS-13. This group that few Americans had heard of in 2006 has become the very face of why Americans want secure borders. They have grown by ten thousand members since the PSR first reported on them in 2006. These “bad hombres” are heavily involved in some of the worst criminal enterprises imaginable, including drug trade, human trafficking, child prostitution, and murder on an unimaginable scale. These are not the “hardworking people who come to America for a better life.” These are mostly boys who come to America to terrorize and kill Americans for personal profit.

If the United States is to be a refuge for anyone, American or otherwise, we must build a wall to keep out these dangerous criminals. We should accept no immigrants who have not been thoroughly vetted for ties to gangs like MS-13. As people like Attorney General Jeff Sessions fight every day to deal with the fallout from illegal immigrants, the American people need to let our elected officials know that we want unvetted immigrants kept out in the first place with a wall. The March 2006 Phyllis Schlafly Report sounded the alarm about this leak in our national security, but it is up to us to make sure that the leak is plugged before the dike is broken beyond repair.

To view the March 2006 Phyllis Schlafly Report in its entirety, please click on the image below. 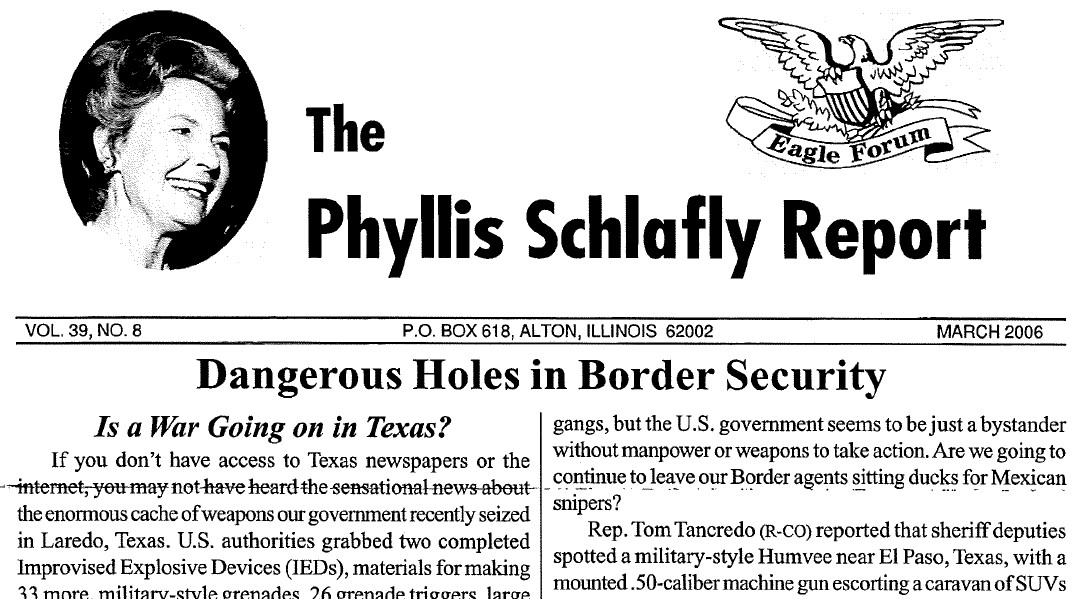 What You Need to Know is Ray Epps was in on it! Who is Ray Epps? Congressman Jamie Raskin gave us the answer after the prompting by Congressman Thomas … END_OF_DOCUMENT_TOKEN_TO_BE_REPLACED

What You Need to Know to Understand is the danger of the Narrative Machine! Read this article from Tablet Magazine to help understand the connection … END_OF_DOCUMENT_TOKEN_TO_BE_REPLACED

What You Need to Know about Priorities & America First. Phyllis Schlafly would give awards to significant people in her life. On these awards … END_OF_DOCUMENT_TOKEN_TO_BE_REPLACED

What You Need to Know is Martha’s Vineyard CNN coverage is funny! 'They enriched us.' Migrants' 44-hour visit leaves indelible mark on Martha's … END_OF_DOCUMENT_TOKEN_TO_BE_REPLACED

What You Need to Know is the media is finally reporting on the Southern Border! Governor Ron DeSantis and Governor Greg Abbott are forcing the media … END_OF_DOCUMENT_TOKEN_TO_BE_REPLACED

Phyllis Schlafly Eagles · October 5 | Follow the Science on Monkeypox As Americans try to put Covid behind us, another frightening virus has … END_OF_DOCUMENT_TOKEN_TO_BE_REPLACED