As a result of his pro-America positions and strong leadership, President Trump has been given all manner of bad labels, including racist, sexist, bigot, homophobe, and so many more. His rhetoric is labeled as incendiary, hateful, and patently false. Yet, one of the most damaging and ubiquitous of these labels is “divisive.” While liberal activists may label all positions which are contrary to their own as “divisive” and CNN may give him the unofficial title of “Divider in Chief,” the true divider of our nation is left untouched. The commonality that has the power to connect all Americans is being actively attacked by the Left and ironically the biggest victims of the Left’s position are the people on the Left themselves. As conservatives, we must do what the December 1995 Phyllis Schlafly Report did and let the pawns of the Left know that we are the ones who want all Americans to be free, prosperous, and united.

That commonality is the English language. Presently, the United States has no official language. Yet, one would have to be completely deluded to deny that participating fully in American life requires proficiency in English. One must know English to read the Declaration of Independence and the U.S. Constitution in their original forms. One must know English in order to participate fully in the democratic process by watching campaign speeches and debates. On the most fundamental level, one must know English to communicate with the vast majority of American citizens and thereby be united as a community and as a nation.

The need for Americans to be able to speak English is not just an opinion that should be held, it is a policy that should be implemented. At present, proficiency in English is a requirement for any immigrant who wants to obtain citizenship in the United States. However, the policy organization ProEnglish points out that the citizenship tests require only elementary understanding that is far below proficiency. This makes the problem bleed out to other areas of public policy. For instance, Phyllis Schlafly pointed out the hypocrisy of federal laws requiring that election ballots be printed in non-English languages and how that relates to the English proficiency requirement for citizenship. She said that “since only citizens can vote, there is no reasonable excuse for non-English ballots.” Even with the federal requirement of non-English ballots, there are stipulations requiring certain numbers of non-English speakers for a certain language to be offered in certain areas. With all of these stipulations, thresholds, and loopholes, one can easily see how confusing this issue can become.

The most incredible irony on the language issue is that institutional multilingualism hurts the very people that proponents of it are trying to help. Many schools like to segregate non-English speaking students and have them learn in their native tongue. Liberals claim that this is the best way to give them the education they need in order to succeed in America. However, the December 1995 Phyllis Schlafly Report pointed out that the exact opposite is true. If an immigrant or the child of an immigrant wants to rise above the most menial jobs on the market, they must be able to communicate in English with co-workers and customers. Preventing young people from learning English in America is just like any other form of segregation in that it will prevent them from joining mainstream America and having the chance to succeed. The December 1995 PSR pointed out that this is why an overwhelming 78 percent of Mexican American parents and 83 percent of Cuban American parents wanted their children to be taught in English.

If non-English speaking Americans want to elevate themselves and their children socially and economically, they should learn English. If Americans want unity within our nation, they should support English as our official language. Using English on official government documents and in the classroom is not preventing anyone from learning or developing other language skills either. Certainly no one wants to stop anyone from cultivating the multilingual skills necessary to conduct international business or read great works of literature in other languages. However, the unity that is so desperately sought today can only be found when the people of our nation can speak proficient English. Let’s stop real “divisive rhetoric” and embrace English as our official language.

To view the December 1995 Phyllis Schlafly Report in its entirety, please click on the image below. 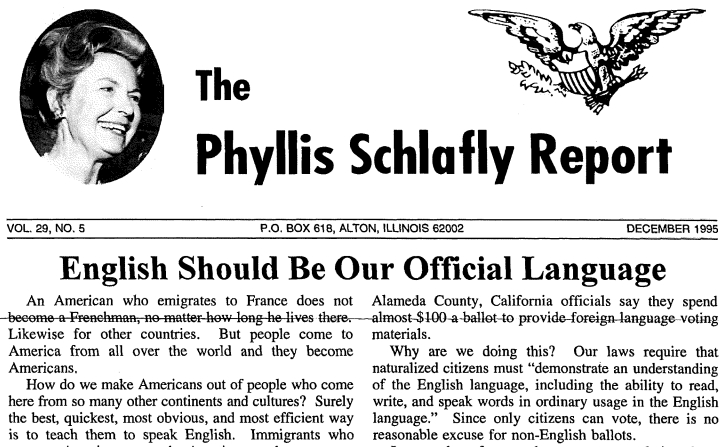 What You Need to Know about the January 6th prisoners. It seems like those who were arrested because of their involvement on Jan. 6th are being held … END_OF_DOCUMENT_TOKEN_TO_BE_REPLACED

What You Need to Know is Republicans cave on gun rights. Senate Republicans have put on full display the ruling class uniparty by compromising with … END_OF_DOCUMENT_TOKEN_TO_BE_REPLACED

What You Need to Know is the Cartels Control the Border! The drug cartels control America's borders and our sovereignty. We are seeing more caravans … END_OF_DOCUMENT_TOKEN_TO_BE_REPLACED

What You Need to Know about the Power of Lawfare. The use of the legal system against We the People is getting more and more sophisticated. This was … END_OF_DOCUMENT_TOKEN_TO_BE_REPLACED

What You Need to Know is Montpelier is going Woke. Soledad O’Brien is now on the board of directors of Montpelier, James Madison’s home. She is part … END_OF_DOCUMENT_TOKEN_TO_BE_REPLACED

What You Need to Know is about Carson v. Makin. This decision ruled that you cannot focus and discriminate against private schools — Supreme Court … END_OF_DOCUMENT_TOKEN_TO_BE_REPLACED

By Mason Mohon, Phyllis Schlafly Eagles Intern Abortion is the most controversial issue in the United States today, with both sides having great … END_OF_DOCUMENT_TOKEN_TO_BE_REPLACED

For Immediate Release: June 24, 2022Contact: Ryan Hite, Communications Director Now Is The Time to Stand Up for Moms and Babies Without … END_OF_DOCUMENT_TOKEN_TO_BE_REPLACED