President Trump delivered again on a campaign promise in September, by ending the unlawful Deferred Action for Childhood Arrivals program, known as DACA. This Obama-era executive order prevents deportation for illegal aliens who claim they were brought to our country as children. This executive action undermined both immigration law and congressional authority over it. 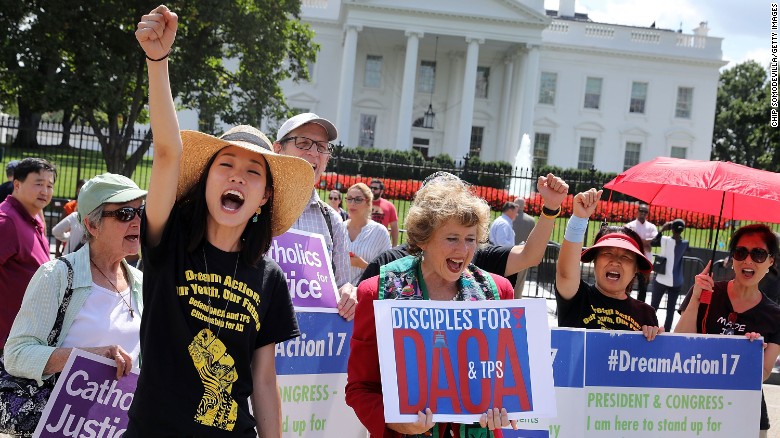 President Trump’s plan to phase out DACA, however, restores the rule of law to immigration. Now, no new applications will be accepted under DACA without further action by Congress. However, existing applications will continue to be processed, and DACA privileges will be honored until they expire. The government will continue issuing DACA renewals for another six months, which gives Congress plenty of time to consider a permanent law.

Trump’s decision to pass the responsibility to Congress, where it belongs, is the best part. The Constitution gives Congress the power to make our immigration policy, so any change in the law must start there with Congress being held politically accountable for any attempts to shift benefits from American citizens to illegals.

Legislation to grant legal status to “Dreamers” (as DACA recipients are called) was introduced in Congress as far back as 2001 and has been rejected many times since then, most recently in 2010 when Democrats controlled both Houses.

In fact, on at least 22 occasions, President Obama himself admitted that he lacked the authority as president to implement a DACA-like program. After changing his mind in an election year, he described DACA as “a temporary stopgap measure.”

House Speaker Paul Ryan and other Republicans now say they want DACA to continue, but many Democrats would go much further if they had the chance. A new Dream Act could extend legal status and provide benefits to millions of currently illegal residents, not just the 800,000 who signed up so far.

By ending this unlawful action, President Trump is properly restoring the role of Congress over our immigration system. Congressmen are elected every two years in the House, and they will hear from their voters if they try to continue a program that prefers illegal aliens over American citizens.

What You Need to Know is Kendi gets paid! Fairfax, Va. School District Spent $24,000 On Ibram Kendi Books For U.S. History Classes. And the … END_OF_DOCUMENT_TOKEN_TO_BE_REPLACED

What You Need To Know about the 2 vaccine mandates. Andrea Kaye, guest host of the #ProAmericaReport, explains how SCOTUS is adding another day to … END_OF_DOCUMENT_TOKEN_TO_BE_REPLACED

What You Need To Know is January 6th has been politicized. Andrea Kaye, guest host of the #ProAmericaReport, talks about January 6th as we go into the … END_OF_DOCUMENT_TOKEN_TO_BE_REPLACED

What You Need to Know about the Drums of War. The drums of war are being pounded by media and Biden - don't fall for it! More and more American … END_OF_DOCUMENT_TOKEN_TO_BE_REPLACED

“Why are we allowing someone that makes $500,000 to get a discount on an electric vehicle? That doesn’t make any sense to me at all,” Sen. Joe Manchin … END_OF_DOCUMENT_TOKEN_TO_BE_REPLACED

If the education establishment wants to know why public schools don't get much respect from our citizenry, they need look no further … END_OF_DOCUMENT_TOKEN_TO_BE_REPLACED

Robert Strange McNamara belongs on the daytime soap operas. Better yet, his histrionics belong on Donahue or Geraldo or Sally Jesse Raphael. We are … END_OF_DOCUMENT_TOKEN_TO_BE_REPLACED

Phyllis Schlafly Eagles · January 26 | The Xi Variant No one should be surprised that new variations of the Covid-19 virus are emerging. That would … END_OF_DOCUMENT_TOKEN_TO_BE_REPLACED

Thousands of Americans gathered on the national mall Sunday for the “Defeat the Mandates” rally led by Robert F. Kennedy Jr., whose new book, The Real … END_OF_DOCUMENT_TOKEN_TO_BE_REPLACED