Globalism, for all of its big money backers and high-power promoters, is not appealing to the average American. Americans love freedom, liberty, and national sovereignty. As Phyllis might put it, globalism does not play in Peoria. Unfortunately, the globalists are aware of this ideological disadvantage, so they concocted a diabolical scheme to deceive the American people as to their real intentions.

Taking a page from the federal daycare playbook, they proceeded to “proclaim a ‘crisis,’ wrap it in ‘children,’ and try to intimidate Congress.” The name of their Trojan horse was the United Nations Convention on the Rights of the Child. Though the threat was great and the stakes were high, the total and ultimate defeat over this Trojan terror marked a great victory for the Phyllis Schlafly Report and the American people. The argument for national sovereignty was clearly laid out by the widely distributed March 1993 issue of the Phyllis Schlafly Report entitled “The New World Order Wants Your Children.”

Nobody wants to be labeled “anti-children,” much less politicians. So when globalists turned over the UN Convention on the Rights of the Child to Congress for ratification, they went so far as to call any congressman anti-children if he opposed the UN treaty. Amidst the deception of the globalists, the Phyllis Schlafly Report cut to the heart of the issue. When conservative congressmen were grasping for some weapon with which to combat the bad publicity thrust upon them by imagery of suffering children, the Phyllis Schlafly Report became that weapon to combat the globalists’ plan.

The treaty’s singular purpose was to give global government control of America’s most foundational building block: her families. While claiming to fill a gap in human rights where children are concerned, it actually would have subjected sovereign American citizens, court decisions, and legislation to the rulings of international courts. Phyllis questioned what these supposed rights might mean when put before an international court of potentially anti-American sentiment.

In the March 1993 Phyllis Schlafly Report, Phyllis demonstrated that the best way to cut through liberal talking points is often to simply define their terms. While no one would deny that children have certain rights as do adults, the globalists only want to create rights that they can control. Children, whether born or unborn, are endowed by their Creator with an inalienable right to life. Yet, the UN Convention on the Rights of the Child gave no definitive stance against this legalized infanticide. Why should we sign a treaty giving a right to “rest and leisure” when the UN will not even protect a child’s very right to exist?

Since “America First” is the antithesis of globalism, it seems only right that globalists would attack President Trump on this crucial pillar of his presidency. Thankfully, we can cut through the globalists’ liberal talking points the same way today as they try to stop Trump’s bold America First agenda. When they talk about doing our part in the “global economy,” they are really talking about making trade deals that favor other nations over America. When they talk about being a “global leader” in handling climate change, they are actually talking about placing ridiculous regulations on American industry while leaving countries like China free to go back on their word and ignore those same climate treaties. Globalists cannot stand a chance against proud red-blooded Americans if we cut through the carefully chosen politically calculated jargon and expose them for being the anti-American frauds they truly are. The Phyllis Schlafly Report employed this tactic in March 1993, and the same thing will still work for us today.

To view the March 1993 Phyllis Schlafly Report in its entirety, please click on the image below. 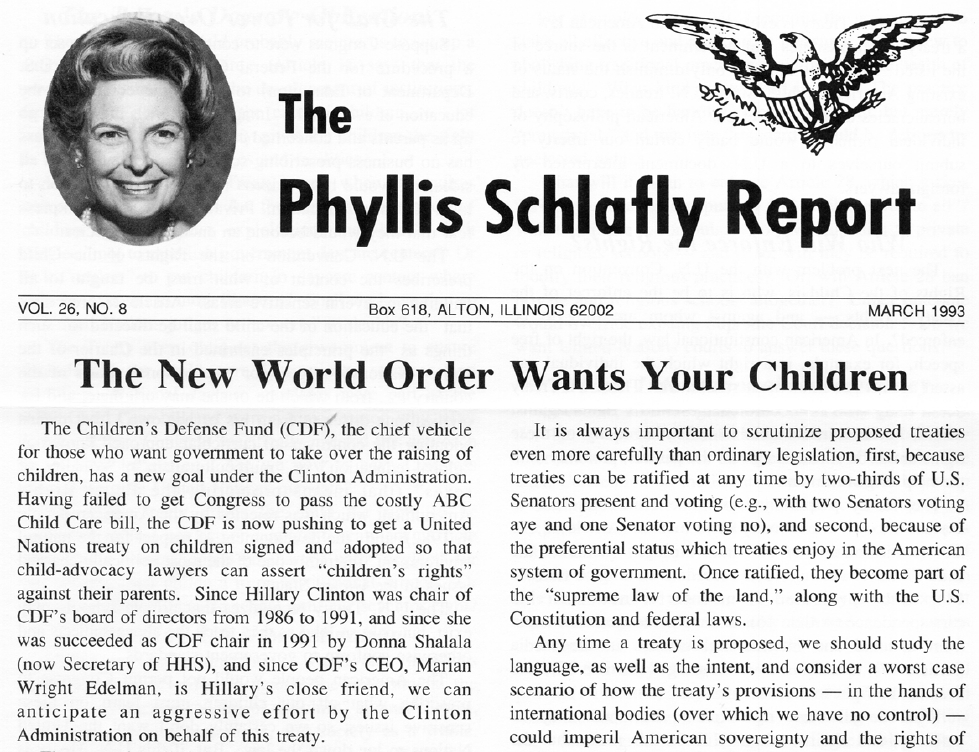 What You Need to Know is Giorgia Meloni Wins in Italy! Italy just had its elections this week and Giorgia Meloni won and will become the new Prime … END_OF_DOCUMENT_TOKEN_TO_BE_REPLACED

What You Need to Know is the media is finally reporting on the Southern Border! Governor Ron DeSantis and Governor Greg Abbott are forcing the media … END_OF_DOCUMENT_TOKEN_TO_BE_REPLACED

Phyllis Schlafly Eagles · #WYNK: Religious Liberty is Under Attack | September 13, 2022 #ProAmericaReport The following is a transcript from the … END_OF_DOCUMENT_TOKEN_TO_BE_REPLACED

What You Need to Know about Open Lawfare against We the People. Biden seems to misunderstand his position as President. If he were king, then … END_OF_DOCUMENT_TOKEN_TO_BE_REPLACED

Phyllis Schlafly Eagles · #WYNK: Who Is Congressman Troy Nehls? | September 28, 2022 #ProAmericaReport The following is a transcript from the Pro … END_OF_DOCUMENT_TOKEN_TO_BE_REPLACED