The purpose of this research project into the Phyllis Schlafly Report has been to see how Phyllis Schlafly’s flagship publication has been right on the issues for fifty years and how the same strategies she was using thirty, forty, and fifty years ago are still relevant today. Phyllis did much the same thing in the May 1987 Phyllis Schlafly Report, except the strategy she was defending was 164 years old at the time. Just as it was in 1823 and 1987, the Monroe Doctrine is a strong statement of policy reflecting the values held by real Americans. Let’s take a look at how the Monroe Doctrine can and should direct the current administration.

The Monroe Doctrine was established by President James Monroe in his December 2, 1823 address to Congress in which he said, “The political system of the allied powers is essentially different from that of America. We should consider any attempt on their part to extend their system to any portion of this hemisphere as dangerous to our peace and safety.” Essentially, its purpose was to inform European powers that they should not interfere with the affairs of the United States or any other American country. Likewise, it promised to refrain from interfering in the affairs of the European powers. The Monroe Doctrine quickly became the bedrock of American foreign policy, not only because of its namesake president, but because it reflected the views of most Americans that our nation should look after her own interests first and not kowtow to foreign powers. It has been invoked by presidents on all sides of the political spectrum, from Polk to Teddy Roosevelt to FDR to Kennedy to Reagan.

The Monroe Doctrine is still the bedrock of American foreign policy today because it still reflects the will of the American people. However, it has taken on a slightly different manifestation. What was once called the Monroe Doctrine is now commonly called America First. Donald Trump did not invent America First. Not even Phyllis Schlafly invented America First. However, what made their policy positions so unique is that they were able to tap into that sweet spot where public opinion and common sense collide. Americans were tired of apology tours and bad trade deals when they voted for Donald J. Trump last November. They want America to be for Americans.

Most people do not think about the fact that “America First” does not mean “America Only.” We are not trying to infringe on other nations or conquer anyone. The Monroe Doctrine took a similarly defensive stance. Essentially, we promised that if they did not mess with us, we would not mess with them and we would happily enjoy a warm and cordial friendship. However, America’s first priority would always be the interests of the American people.

Phyllis Schlafly recognized the modern importance of the Monroe Doctrine in her May 1987 Phyllis Schlafly Report. She said, “He [Monroe] bequeathed to us a property that is part of our national honor. The Monroe Doctrine is a doctrine for all seasons. May it live forever.” National sovereignty is one of the defining issues of our time, and of the Trump presidency. We must stand strongly beside him and lift high the public sentiment that we want America to put America first. President James Monroe may have been the first to vocalize this doctrine, but it is up to us to preserve. We must ensure that this “doctrine for all seasons” truly does “live forever” so we can preserve our strong Union for generations to come.

Please click below to view the May 1987 Phyllis Schlafly Report in its entirety. Also included in this week’s celebration of the Phyllis Schlafly Report is a special look at the twentieth anniversary issue from August 1987. If you have just started reading articles in this special series, reading the August 1987 issue is a great way to catch up on the first twenty years of PSR highlights. 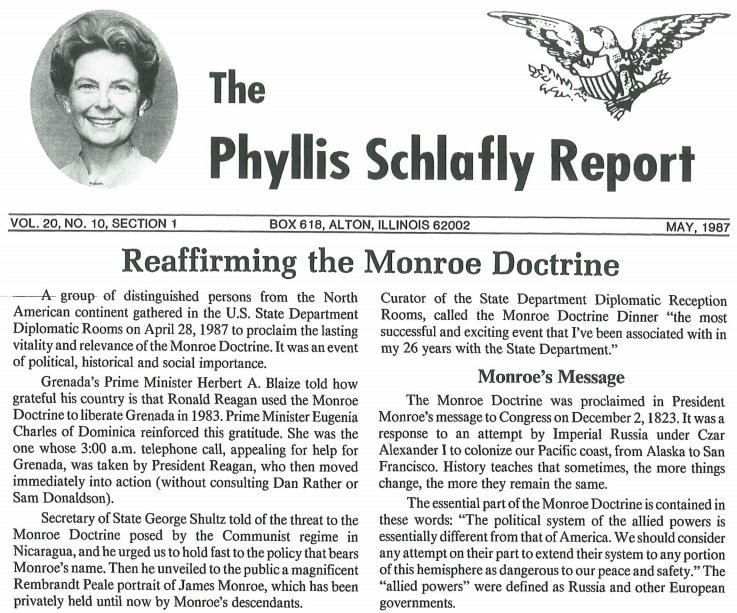 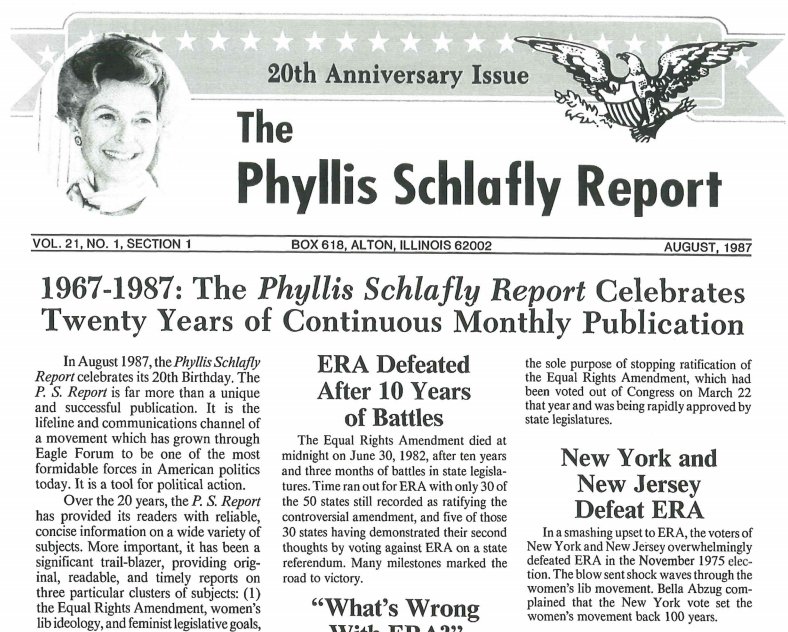 What You Need to Know about Priorities & America First. Phyllis Schlafly would give awards to significant people in her life. On these awards … END_OF_DOCUMENT_TOKEN_TO_BE_REPLACED

What You Need to Know is the Media and Democrats are spinning! Coverage up to the November elections will tell us it's close even though it's not. See … END_OF_DOCUMENT_TOKEN_TO_BE_REPLACED

Phyllis Schlafly Eagles · #WYNK: It's 1894 In 2022 | September 30, 2022 #ProAmericaReport The following is a transcript from the Pro America … END_OF_DOCUMENT_TOKEN_TO_BE_REPLACED

What You Need to Know is the comparison from 1894 to 2022. We are in a similar situation as in 1894. They were in a recession back then. There was a … END_OF_DOCUMENT_TOKEN_TO_BE_REPLACED

Phyllis Schlafly Eagles · #WYNK: Who Is Congressman Troy Nehls? | September 28, 2022 #ProAmericaReport The following is a transcript from the Pro … END_OF_DOCUMENT_TOKEN_TO_BE_REPLACED

What You Need to Know is The Narrative Machine is Obsessed with Trump! First, it used to be called the Trump Exhaustion Syndrome now the left is … END_OF_DOCUMENT_TOKEN_TO_BE_REPLACED

Phyllis Schlafly Eagles · October 5 | Follow the Science on Monkeypox As Americans try to put Covid behind us, another frightening virus has … END_OF_DOCUMENT_TOKEN_TO_BE_REPLACED