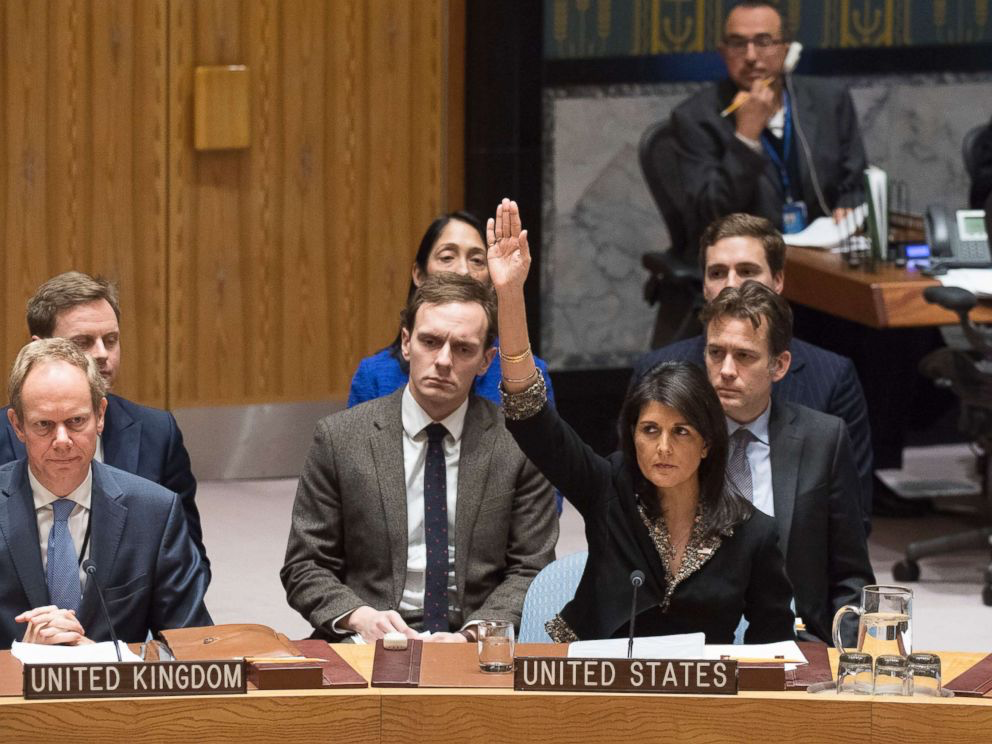 On Dec. 21, as President Trump prepared to leave Washington for Christmas at Mar-a-Lago, the White House released a list of “81 major accomplishments” during the President’s first year in office. A second list touted more than 100 other “minor achievements” in 2017.

His fulfillment of his campaign promise to roll back globalism is one of his crowning achievements of the year. Without exception, President Trump stood up against the incessant pressure by other countries against the United States.

An example of this occurred later the same day at the United Nations in New York. The UN General Assembly held an emergency session to condemn Trump’s decision to move the American embassy to Jerusalem, thereby walking into a trap that will come back to bite that dysfunctional body.

“The United States will remember this day in which it was singled out in this assembly for the very act of exercising our right as a sovereign nation,” said U.S. Ambassador Nikki Haley. Voting against the United States were several of the top recipients of U.S. foreign aid such as Egypt, Iraq and Afghanistan.

Ambassador Haley acted promptly to deliver on her promise of consequences. The U.S. Mission to the United Nations announced that next year’s UN budget would be slashed by over $285 million and warned that further reductions would also be made to the UN’s management and support functions.

“We will no longer let the generosity of the American people be taken advantage of,” Haley said in a statement, adding that the “inefficiency and overspending” of the organization is well-known. The timing of her statement sends a clear message.

After the vote, Haley reminded the assembly that the U.S. was “by far the single largest contributor to the UN” and would remember the vote “when we are called upon to once again make the world’s largest contribution to the United Nations, and we will remember it when so many countries come calling on us, as they so often do, to pay even more and to use our influence for their benefit.”

“I must also say today: when we make generous contributions to the UN, we also have expectation that we will be respected,” she said. “What’s more, we are being asked to pay for the dubious privileges of being disrespected.”

Before the vote, the President Trump spoke at a White House cabinet meeting about the vote scheduled for the next day. “They take hundreds of millions of dollars and even billions of dollars, and then they vote against us,” he said. “Well, we’ll be watching those votes. Let them vote against us; we’ll save a lot. We don’t care.

“But this isn’t like it used to be, where they could vote against you, and then you pay them hundreds of millions of dollars and nobody knows what they’re doing. We’re not going to be taken advantage of any longer.”

Three weeks earlier, Haley announced that the Trump Administration had properly withdrawn from the UN Global Compact for Migration, which claims to be aimed at protecting the rights of refugees and migrants. Its real purpose is to give refugees and migrants the right to resettle in the countries of their choice (the United States and Europe) while fighting what is misnamed as xenophobia, racism, and discrimination towards refugees and migrants.

“No country has done more than the United States, and our generosity will continue,” Haley said in a statement. “But our decisions on immigration policies must always be made by Americans and Americans alone.”

“We will decide how best to control our borders and who will be allowed to enter our country,” Haley continued. “The global approach is simply not compatible with U.S. sovereignty.”

Secretary of State Rex Tillerson explained that “we simply cannot in good faith support a process that could undermine the sovereign right of the United States to enforce our immigration laws and secure our borders.” He stressed that it “is the primary responsibility of sovereign states to help ensure that migration is safe, orderly, and legal.”

As 2017 winds down, so does the century-long push for globalism. Thank you, President Trump!

What You Need to Know is we are in a proxy war with Russia. Until now, we’ve been able to at least try to say we have given Ukraine defense weapons … END_OF_DOCUMENT_TOKEN_TO_BE_REPLACED

What You Need to Know is we’re in a new pro-life America. Today’s March for Life is the first during which we can celebrate the overturn of Roe v. … END_OF_DOCUMENT_TOKEN_TO_BE_REPLACED

Predicting an imminent worldwide recession, global business elites convene at the Alps ski resort of Davos, Switzerland as they do every year in … END_OF_DOCUMENT_TOKEN_TO_BE_REPLACED

What You Need to Know is Mom first! Life begins at conception. But what if the pro-life movement reframed the battle. What if we advertised that life … END_OF_DOCUMENT_TOKEN_TO_BE_REPLACED