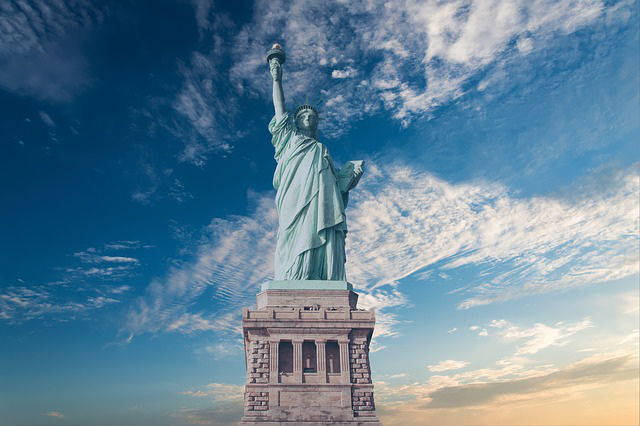 Emma Lazarus was born on July 22, 1849 into a wealthy New York family that was descended from Sephardic Jewish Americans. She wrote The New Colossus, the poem for which she is best-known today, in 1883. It was created to sell at an auction to raise money to build the pedestal on which the Statue of Liberty would stand in New York harbor. Although the statue was a gift from the people of France, American contributors paid for the platform. In 1903, the poem was engraved on a bronze plaque and mounted inside the pedestal’s lower level.

Designed by Frederic Auguste Bartholdi, The Statue of Liberty representing Libertas, the Roman goddess of Freedom and, originally called Liberty Enlightening the World, was given by France to the United States as a gift to commemorate the American Revolution. It was never intended to be used as a symbol to all who entered New York City harbor that America welcomes immigrants to its shores.  Instead, America sought to use it as a symbol of republicanism, not the party but the form of government. The statue had little or nothing to do with immigration except that Bartholdi placed his statue on Bedloe’s Island in New York Harbor because he knew, if located there, everyone passing in and out of the harbor would see it. It wasn’t until Emma Lazarus wrote her now famous poem that the Statue of Liberty became associated with immigration.

The New Colossus by Emma Lazarus

These words by Emma Lazarus, as they appear at the end her sonnet, “The New Colossus,” are now interpreted by many as an unconditional welcome to all who enter this nation, under any circumstances, thus shaping the way many Americans view immigration policy.

“Give me your tired, your poor,
Your huddled masses yearning to breathe free,
The wretched refuse of your teeming shore.
Send these, the homeless, tempest-lost to me,
I lift my lamp beside the golden door!”

Not too surprisingly, Emma Lazarus, who penned the words that were engraved at the base of the Statue of Liberty about huddled masses yearning to breathe free, was a Jewish socialist, most likely a nice person, but she wasn’t an elected official. Even so, many on the Left are pretending Emma Lazarus was establishing national policy or that it’s our diversity that makes this country such a wonderful nation.

In no way am I against legal immigration, as my ancestors of Pennsylvania Deutch (German) heritage came from Germany to Pennsylvania in 1738 and settled near Philadelphia, PA; however, I believe the advantages brought about through diversity are widely exaggerated.

At the time of this nation’s creation, our Founding Fathers, men of the caliber of Washington, Jefferson, Madison, Adams, Mason and Franklin, acting as midwives at the birth of the United States, represented very little diversity. English was their common language; they were all of the same race, sex and religion; and it’s difficult to dispute that our nation has ever been in better hands.

For decades people risked everything, including their lives, to get here because they believed there was nothing better than being an American.  Most of them understood that the streets weren’t really paved with gold.  It was the promise that was golden.  The promise was that if you learned the common language, obeyed the laws and worked hard, you would succeed to the extent that your abilities would allow; and, what’s more, your American children would be free to pursue and perhaps even achieve their wildest dreams.

That was then. Today, millions of immigrants, including some who make it here legally, assume they don’t have to learn English or assimilate to our culture and values, but rather, that we accommodate theirs.  Moreover, they believe they are entitled to collect welfare, get free health services and even vote in our elections. Naturally, the always dependable ACLU is fighting for illegal aliens to have the right to vote in presidential elections.

But can we really place all the blame on immigrants, both illegal and legal, who after arriving in this country become dependent on the free perks and unconditional services handed out by our government (courtesy of taxpayers) for their living, handouts that not even American citizens are privy to.   It is, after all, what a great many sources are telling immigrants, people like college professors, newspaper publishers, owners of cable TV stations, Hollywood celebrities and, worst of all, members of Congress.

After President Donald Trump’s executive order on immigration in January of 2017, many critics quickly took up a familiar rallying cry, lifting words from the Statue of Liberty that have for decades represented American immigration: “Give me your tired, your poor / Your huddled masses yearning to breathe free.”

Prominent among them were former independent presidential candidate Evan McMullin, Minnesota Rep. Keith Ellison and former Secretary of State Madeleine Albright as they condemned Trump’s suspension of the country’s refugee assistance program, for didn’t the words of the poem say that the afflicted and oppressed of the world should be welcomed unconditionally?  The before-mentioned individuals were either unaware or chose not to recognize that when Lazarus wrote her poem to help raise funds for the statue’s pedestal, she ignored the stated purpose of the colossal sculpture, a French-built homage to America’s republican government, focusing instead on her concern over Jewish pogroms in Russia.

Is it any wonder why immigration reform is stalled when legislators calling for comprehensive immigration reform on both sides of the aisle tend to use the Lazarus words as a compassionate-driven approach to tug at the heartstrings of the American people?  Consider what happened recently when a compromise couldn’t be reached on so-called Dreamers.  Under an Executive Order set in place by President Obama, the “Dreamer” law would allow unauthorized migrants brought to America as children a fast track to citizenship if they meet certain conditions

As hokey as Emma Lazarus’s words are when used to win popular appeal for immigrants, people named Schumer, Warren, Pelosi, Durbin, Feinstein, Warner, Sanders and Blumenthal would like to add one additional line to the poem:  “Send us those yearning to vote for Democrats.”

In a closely related matter, Chicago’s mayor, Rahm Emanuel, whose popularity among the city’s blacks has descended to levels unseen since the heyday of George Wallace and Bull Connor, is so desperate to be re-elected, he has come up with a city card which would give Chicago’s illegal aliens the right to vote. Not only has Emanuel turned Chicago into a sanctuary, but he has taken another giant step in his attempt to turn Chicago into Ciudad Chicago, Mexico’s northern-most municipality.

As a sovereign nation, this nation has the right to set immigration limits as to the number of immigrants allowed to enter this nation based on what they are able to contribute to this nation, instead of massive numbers of illegal immigrants who have crossed over our borders, many of whom are takers who drain the limited financial resources available to our nation.

What You Need to Know is thank Trump for the end of Roe v. Wade. As great as the March for Life was last week and excited as my family was to … END_OF_DOCUMENT_TOKEN_TO_BE_REPLACED

What You Need to Know is Joe Biden’s ego will be his undoing. He should drop executive privilege and get this classified documents investigation over … END_OF_DOCUMENT_TOKEN_TO_BE_REPLACED

What You Need to Know is we are in a proxy war with Russia. Until now, we’ve been able to at least try to say we have given Ukraine defense weapons … END_OF_DOCUMENT_TOKEN_TO_BE_REPLACED

What You Need to Know is a lesson on documents and double standards. Suddenly everyone has classified documents and everyone is spinning the stories … END_OF_DOCUMENT_TOKEN_TO_BE_REPLACED

What You Need to Know is to thank the Freedom 20 who took up the House Speaker fight last week. Get the list here — it only takes 3-5 minutes … END_OF_DOCUMENT_TOKEN_TO_BE_REPLACED

For Immediate Release: January 26, 2022Contact: Ryan Hite, Communications Director Solution Staring Us In the Face to Save American Lives: Shut the … END_OF_DOCUMENT_TOKEN_TO_BE_REPLACED

What You Need to Know is the chaos in the House isn’t bad! This is the messy representative system of our republic at work. Only one side is offering … END_OF_DOCUMENT_TOKEN_TO_BE_REPLACED

What You Need to Know is Mom first! Life begins at conception. But what if the pro-life movement reframed the battle. What if we advertised that life … END_OF_DOCUMENT_TOKEN_TO_BE_REPLACED