Immigration has been at the forefront of the national discussion as Democrats selfishly shut down the federal government to protect the interests of illegal aliens over the interests of our troops and other federal employees who were not being paid. The Dems finally caved and came crawling back to the president for a deal to fund the government, asking only for promises that new legislation to help illegals would be considered soon. However, it is no surprise to most that such issues as E-Verify, chain migration, anchor babies, DREAMers, and other points in the larger dialogue about immigration have been around for quite a while. In July 2011, Phyllis Schlafly wrote a definitive treatise on pro-America immigration policy. Displaying a timeless view of America First national sovereignty, this Phyllis Schlafly Report is just as applicable today as it was in July 2011.

Making tough issues easier to understand for the average American is one of the defining characteristics of the Phyllis Schlafly Report. Helping a skeptic adopt the conservative position on issues of the day requires that one step back from the talking heads of the mainstream media and understand exactly what is at stake on a fundamental level. For example, Phyllis summed up E-Verify as “a computer process that makes it fast and easy for employers to check the validity of employees’ Social Security numbers to ascertain if they are legal.”

One must wonder what could possibly go wrong with a simple application of twenty-first century technology to make life easier for employers, employees, and Immigrations and Customs Enforcement. A look at the ACLU’s website reveals that liberal arguments against E-Verify amount to privacy concerns and questions about the system’s effectiveness. However, it is hard to remember the last time liberals cared about the ineffectiveness of government programs or government infringements on privacy. Although, it is quite a stretch to call the program “ineffective” if it works 99.5% of the time. It is also quite a stretch to call it a breach of privacy to share your Social Security number with the government that issues that number. When one breaks the issue down to its most simple foundation, it is easy to see that opposition to E-Verify from the Left is nothing more than politicized rhetoric.

The same thing could be said about the situation with the DREAMers. The DREAM Act, which is short for Development, Relief, and Education for Alien Minors Act, has been introduced in Congress repeatedly since 2001. Yet in 2001, 2006, 2009, 2010, and 2011, Congress strongly rejected this anti-American legislation. Always the sore loser, President Barack Obama announced in 2012 that he would circumvent the legislative process and force the DREAM Act through as an executive order. This unwarranted aid to illegal aliens, which Phyllis called “a nightmare for Americans,” was rebuffed by President Trump. Not only is it a gross affront to the American legal system, but the Congressional Budget Office estimates that its continuance would cost American taxpayers $27 billion dollars in the next ten years, while only creating $1 billion in revenue.

It is time for America to start caring about Americans again. We are under no obligation to dole out free stuff to aliens who came to this nation illegally. We are under no obligation to let aliens take the jobs of American citizens by letting Congress reject the common sense measure of E-Verify. While America clutches her chair through each exciting development as though watching a soap opera, let’s not forget that these decisions affect us all. We must get involved to let our legislators know we demand them to look after the interests of Americans first.

The view the July 2011 Phyllis Schlafly Report in its entirety, please click on the image below. 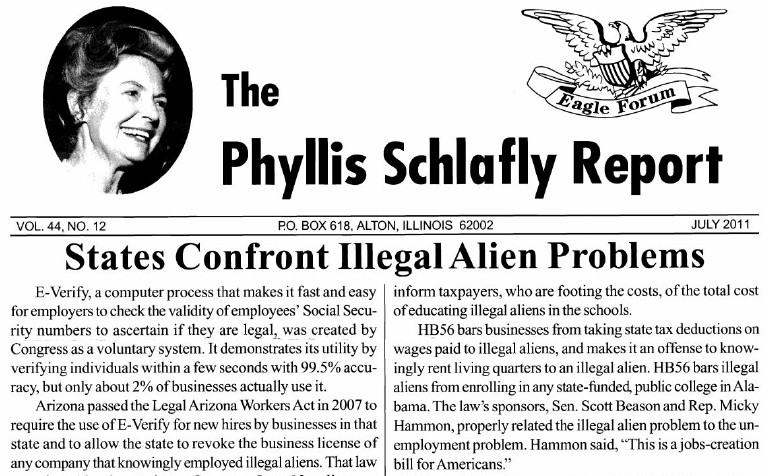 What You Need to Know about the January 6th prisoners. It seems like those who were arrested because of their involvement on Jan. 6th are being held … END_OF_DOCUMENT_TOKEN_TO_BE_REPLACED

What You Need to Know is Republicans cave on gun rights. Senate Republicans have put on full display the ruling class uniparty by compromising with … END_OF_DOCUMENT_TOKEN_TO_BE_REPLACED

What You Need to Know is Who’s against Trump. This select committee for Jan 6th is a dangerous kangaroo court. It's really just a show trial and we … END_OF_DOCUMENT_TOKEN_TO_BE_REPLACED

Phyllis Schlafly Eagles · #WYNK: Cartels Control the Border | June 6, 2022 #ProAmericaReport The following is a transcript from the Pro America … END_OF_DOCUMENT_TOKEN_TO_BE_REPLACED

Phyllis Schlafly Eagles · June 30 | Pro-Life Without Exceptions: Life of the Mother Enemies of the pro-life movement know that they can never win … END_OF_DOCUMENT_TOKEN_TO_BE_REPLACED

Phyllis Schlafly Eagles · June 29 | Pro-Life Without Exceptions: Health of the Mother Empty emotional appeals are the only way for pro-choicers to … END_OF_DOCUMENT_TOKEN_TO_BE_REPLACED