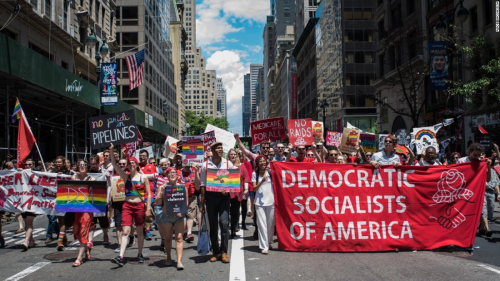 It is possible to have socialism without communism, but it’s a fine line with the latter denoting totalitarianism. Confusion exists because there are socialistic societies that aren’t tyrannies, such as in Scandinavia. An example of pure socialism was the kibbutzism, as were the commune hippies created in the  1960’s. Neither lasted because they go against human nature. The only way for the system to last is to morph into communism, wherein the dictators can force socialism down the throats of the people.

Travor Loudon, an author, filmmaker, and public speaker from New Zealand, who for more than 30 years has researched radical left, Marxist, and terrorist movements and their covert influence on mainstream politics, views socialism as an euphemism for communism (two peas in the same pod), because both lead to tyranny.

Loudon considers the first group, the Democratic Socialists of America, founded in 1981, as the most dangerous of the American left.

It is also the largest Marxist organization in the U.S. and is fully entrenched within the present Democrat Party.

As of now the DSA has more than 200 chapters in all 50 states, giving the DSA the ability to penetrate the Democratic Party in almost every state. It also has a religious commission that features many pastors, church officials, theologians, and religious academics who vigilantly indoctrinate malleable minds that Christianity and socialism go hand-in-hand. DSA is also huge on college campuses.

As to the failure of Congress to fix the immigration law and allowing tens of thousands of illegal aliens to cross the southwest border every week, Mr. Loudon, in an interview with the Epoch Times on May 29, 2019, called the failure “an orchestrated, communist assault on America, to destroy America’s borders, to create confusion in America, to overwhelm the system politically.”

Loudon further states, “Because America is [the communists’] main enemy, and if you can’t bring it down through nuclear weapons, you bring it down through illegal immigration, which is maybe just as effective in the long run.  You can see what 15, 16, 20, 25 million new Democratic voters is going to do to this country. You will lose Texas, you’ll lose Florida, you will lose Georgia, Arizona, North Carolina. There will never be, ever, another Republican or conservative president in our lifetimes. You will have a one-party state in America. And that is the plan. That is why they are doing this. This is Marxist. This is Leninist. And this goes back to American politicians cooperating with hostile foreign powers in the destruction of America.”

Many Americans do not realize this nation already has a form of socialism reflected in Social Security, Medicare and welfare. It was FDR who introduced socialism in a big way. Obama tried to force even more of it on us with the Affordable Care Act.  When considering what socialism has done to Venezuela, how is it that so many Americans are unable to grasp the fact that socialism makes no sense? It is impossible for a government to provide free everything for everybody, at least for any length of time, because its sole source of money is the compulsory over-taxation of the productive for the sake of underachievers.  In addition, it inevitably leads to the loss of liberty and to tyrants like Stalin, Hitler, Mussolini, Mao, Pol Pot, Castro, Chavez and Maduro assuming control of their citizens’ lives.

On top of all that, socialism demands that human nature itself be turned on its head.

Since the days of cavemen, humans have competed for the warmest caves, the tastiest parts of dinosaurs, the most attractive mates, the most money, the largest office, the greatest honors, the fastest cars and the biggest homes.

In short, socialism works perfectly only in the delusional heads of Bernie Sanders and Elizabeth Warren. The built-in problem faced by socialists is summed up by this old saying: “When the only tool you own is a hammer, every problem begins to look like a nail.”

Existence of a dichotomy

In that socialism is so bad for the people and the economics of nations where it exists, how can it be, according to a Harris poll for “Axios on HBO” released on June 12, 2019, that four in 10 Americans say they would prefer living in a socialist country rather than a capitalist one, despite 49% understanding that it is a system dependent on dictatorship?  Women are more likely to have that option, with 55 percent of females between the ages of 18 and 54 preferring to reside in a socialist country, while the majority of men prefer to live in a capitalist country.

The Harris poll is in line with a Gallup poll of April 2019. 43% of Americans believed socialism is good for America.

The Gallup survey also found that

Since World War I, America has been on the slippery slope toward socialism. The goal of Soviet Russia was to infiltrate American values with the destructive social goals of the Communist Manifesto. Former Soviet KGB agent Yuri Bezmenov, who defected from the Soviet Union in 1970, was interviewed in 1985 about Soviet infiltration methods. Watch the interview here. He said that by 1970 the Soviet Union already had infiltrated the U.S. through brainwashing left-leaning people in the news media, entertainment, politics, business, education, and religion.

Robert Knight in his column of May 20, 2019, Rejecting the Marxist Version of the Constitution, presents the following further insight into the impetus for the Left’s socialist agenda:

“When the workers of the world failed to unite and trigger economic upheaval in the 20th century, the left adopted a different strategy. Communist theorists Antonio Gramsci, Herbert Marcuse and the Frankfurt School saw that a cultural revolution, including educational indoctrination and media propaganda, could weaken society and lead to political revolution.

That’s why the left embraces pornography, abortion, homosexuality, same-sex marriage and now transgenderism. It all works against a family-based culture whose members are far less likely to fall for the left’s promises of “free stuff.”

Although Bernie Sanders was the only advocate of socialism in the 2016 presidential race, in the 2020 presidential race several Democrat presidential candidates are openly pushing for socialism through the promise of “free stuff” as their leading agendas.  Bernie Sanders is promoting socialist policies like “Medicare for All,” the “Green New Deal,” free college tuition, and the $15 minimum wage, which are being endorsed by other Democrat candidates including Sen. Kamala Harris (D-Calif.), Sen. Cory Booker (D-N.J.), and Sen. Elizabeth Warren (D-Mass.), without any thought that the consequences of socialism is poverty and oppression.

Where the Left is heading

The Democrat Party is being hijacked by the Democrat Socialists of America.  Although extremism has gone through a number of transformations over the past half century, today those most likely to label their political opponent as such are socialists.  How often have you heard the following statements made?

If you believe that people who attempt to sneak across the border, putting their children or, more often, other people’s children at risk, are the bad guys and that those trying to protect our border are the good guys, you’re an extremist.

If you think it makes far more sense to be concerned about the votes being cast by non-citizens and by those refusing to use photo I.D.s to identify themselves than to worry about Russia meddling in our elections, you’re an extremist.

If you think there is something screwy about our schools, which are otherwise religion-free zones, indoctrinating our young people with the madness of Islam, you’re an extremist.

If you think that when it comes to college admission, there is something vile about tossing out academic criteria in order to accommodate undeserving minority students, you’re an extremist, as well as a racist and a bigot.

If all you do is believe that Mother Nature, and not man, controls the weather, that’s more than enough to get branded an extremist.

In an America that neither Barry Goldwater nor John F. Kennedy would recognize, communism, not common sense, currently is making headway in this nation.  The future of this nation could very well hinge on the 2020 election. Will common sense prevail? If not this nation will cease being a Democratic Republic with freedom for all for those our descendants.

Phyllis Schlafly Eagles · December 1 | We Need More Badges Herschel Walker had an iconic moment in a debate with Sen. Raphael Warnock when he … END_OF_DOCUMENT_TOKEN_TO_BE_REPLACED

What You Need to Know is Democrats’ plan to slow down GOP investigations. David Brock (of Media Matters) released a memo detailing a group that will … END_OF_DOCUMENT_TOKEN_TO_BE_REPLACED

What You Need to Know is why Trump is not an echo of other candidates before him. Phyllis Schlafly famously first used that phrase — a choice, … END_OF_DOCUMENT_TOKEN_TO_BE_REPLACED

What You Need to Know is why Trump is not an echo of other candidates before him. Phyllis Schlafly famously first used that phrase — a choice, not an … END_OF_DOCUMENT_TOKEN_TO_BE_REPLACED

Elon Musk has 119 million followers on Twitter, the platform which he just bought for $44 billion. That’s more followers than Taylor Swift, whose … END_OF_DOCUMENT_TOKEN_TO_BE_REPLACED

Phyllis Schlafly Eagles · November 23 | Tables Turn on Immigration Crisis When referring to Republicans, Democrats talk about how no one is above … END_OF_DOCUMENT_TOKEN_TO_BE_REPLACED

What You Need to Know is Fauci retires from the Covid Industrial Complex! He’s sneaking out under the cover of Thanksgiving and a no-news week. He … END_OF_DOCUMENT_TOKEN_TO_BE_REPLACED

President Biden and his Leftist administration have weaponized the Department of Justice (DOJ) for their political purposes to an intolerable extreme. … END_OF_DOCUMENT_TOKEN_TO_BE_REPLACED

What You Need to Know is what’s right in America! We talk so much about what’s wrong in America and how broken our elected officials are — there’s a … END_OF_DOCUMENT_TOKEN_TO_BE_REPLACED

What You Need to Know is the Narrative Machine fights to Free Speech on Twitter. Elon Musk, like him or not, is revealing the angst of Big Media and … END_OF_DOCUMENT_TOKEN_TO_BE_REPLACED