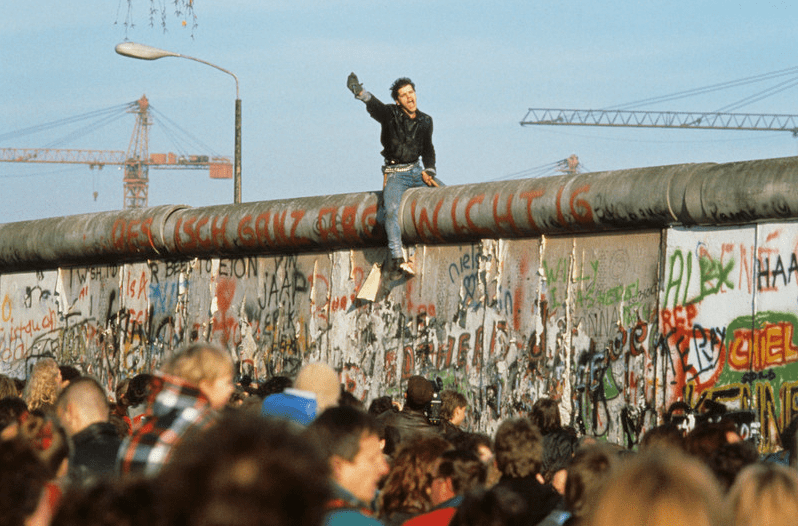 Today is the 29th anniversary of the fall of the Berlin Wall. It was on November 9, 1989 that the Soviet Union opened the border and announced that people could freely cross from Communism into freedom. President Ronald Reagan’s greatest achievement was to bring about the collapse of the Soviet Empire — and it was a stunning event. Anyone who might have predicted this when Reagan became president in 1981 would have been laughed out of town. Hardly anybody believe the Soviet Union would collapse in their lifetimes. 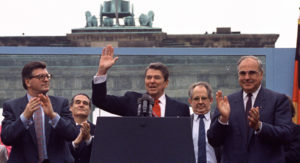 “We win, they lose,” Reagan said of the Soviets. In 1983 he dared to label the Soviet Union an “evil empire.” He designed our nation’s future built on victory over Communism.

In the years preceding Reagan’s presidency, U.S. foreign policy was dictated by Henry Kissinger, who believed that the Soviet Union would always be the world’s one superpower, and that it was his job to negotiate the best second place for the United States. Kissinger believed we had to accept a future built on Nikita Khrushchev’s “peaceful coexistence,” Richard Nixon’s détente, Mikail Gorbachev’s perestroika, and treaties that accepted U.S. strategic inferiority to the Soviet Union. Kissinger served for far too long across Republican and Democratic administrations, and Phyllis Schlafly identified him as a Marxist Deep State figure, long before that sentiment was widely shared.

But when Ronald Reagan came to office, his strategy was completely different from the days of Kissinger. His strategy sounded familiar, especially in light of our current President Trump. “We win, they lose,” Reagan said of the Soviets. In 1983 he dared to label the Soviet Union an “evil empire.” He designed our nation’s future built on victory over Communism. That attitude was what led him to go to Berlin in 1987 and dare to say, “Mr. Gorbachev, tear down this wall.” Reagan wrote those words into the speech himself. Reagan was the architect of the awesome victory that took place in the first year after he finished his term. Margaret Thatcher summed it up, “Ronald Reagan won the cold war without firing a shot.”

Victory over communism happened because Reagan demanded it, both in rhetoric and in policy decisions, and millions of people owe their freedom today to the vision and the courage of a true leader, Ronald Reagan.

What You Need to Know is Nancy Pelosi and her colleagues are locking the American people into a solitary bubble. People are brainwashed and trapped in … END_OF_DOCUMENT_TOKEN_TO_BE_REPLACED

What You Need to Know is the problem with forgetting about China. The looming issue for nations across the South Pacific is the growing influence of … END_OF_DOCUMENT_TOKEN_TO_BE_REPLACED

What You Need to Know is Montpelier is going Woke. Soledad O’Brien is now on the board of directors of Montpelier, James Madison’s home. She is part … END_OF_DOCUMENT_TOKEN_TO_BE_REPLACED

Phyllis Schlafly Eagles · #WYNK: Montpelier is going Woke | May 19, 2022 #ProAmericaReport The following is a transcript from the Pro America … END_OF_DOCUMENT_TOKEN_TO_BE_REPLACED

What You Need to Know is our election system is broken! It's failing and We the People have no confidence in the system. Pennsylvania has shown again … END_OF_DOCUMENT_TOKEN_TO_BE_REPLACED

What You Need to Know is the Border is about to be totally open! In just a few days we are going to see around 18,000 illegal aliens crossing our … END_OF_DOCUMENT_TOKEN_TO_BE_REPLACED