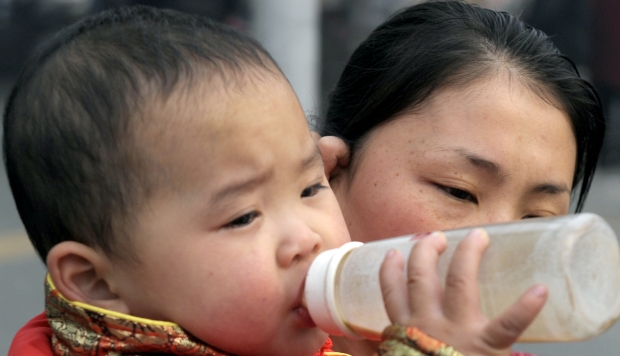 The China infant milk scandal, even though it has so far not damaged any American babies, has exposed a major defect in the concept of free trade. It’s dangerous to buy products from a nation whose economy is not based on Judeo-Christian morality.

The American private enterprise system depends on honesty as normal and accepted behavior. We don’t have or want a policeman on every corner, or an army of government officials to inspect every bottle of baby formula or tube of toothpaste.

We do have regulations and random checks, but the majority of producers and sellers are restrained from criminality by adherence to the Judeo-Christian ethic. In Communist China, there is no such restraint, and it is utterly impossible to regulate and inspect the thousands of small producers.

China’s milk formula poisoned with melamine is now known to have killed at least four infants, sickened 50,000, and hospitalized 12,892 mostly newborns, with 158 suffering from acute kidney failure. Kidney stones cause extremely painful blockages, a problem that is relatively uncommon in babies.

Melamine, which is derived from coal, is an industrial chemical used in plastics, fertilizers, flame-retardant clothing, dyes, glue, and tanning leather. It is supposedly banned from food production.

The widespread addition of melamine into infant formula was obviously deliberate and could not have been accidental. Melamine didn’t fly out of the air into the milk or evolve from another substance.

The purpose of this deadly contamination was to produce a cheaper product by adding water to increase the volume of milk, and then adding melamine to inflate the protein readings on a common industrial test.

Melamine is the same dangerous chemical the Chinese added to pet food that sickened and killed thousands of American dogs and cats in 2007. That, too, was intentional; the purpose was to trick Americans into thinking they were buying animal feed with higher protein content.

Don’t forget the toothpaste and cough syrup into which the Chinese substituted the less expensive diethylene glycol, an ingredient used in antifreeze, for the more expensive glycerin, a solvent safely used in drugs. Remember also the anticlotting drug heparin from China that killed at least 80 Americans.

The biggest offender among the 22 melamine-using dairy companies, Sanlu Group, knew about the infant injuries for months before warning the public. Infant formula is widely used in China because mothers return to big cities to work in factories shortly after birth, leaving their babies to be raised by grandparents.

Sanlu began hearing reports of illnesses from its tainted formula as early as March, and the first death was reported on May 1. Nevertheless, Sanlu donated large quantities of formula to victims of the big earthquake in May.

Sanlu reported news of tainted formula to its board of directors six days before the Olympic Games opened in Beijing. Chinese reporters were told not to report negative news that might disrupt the games, and it was not until September 11 that the public was warned and a recall ordered.

At least 9 of the 22 dairy companies selling melamine-contaminated milk, including Sanlu Group, enjoyed inspection-exempt status called “mianjian.” This controversial status is based on the assumption that companies that passed quality tests for three years could then be trusted to regulate themselves.

Others claim that China’s two-tiered product-regulatory system is really designed to protect and nurture a handful of privileged, mostly state-owned companies. The Chinese economic system, which some mistakenly tout as emerging capitalism, is based on special advantages for government favorites.

China’s poorly regulated and unreported supply chain starts with a farmer owning several cows, each milked three times a day, selling his milk to local dealers, who in turn sell to companies like Sanlu, which combine the milk before reselling it. There is no way to trace problems if they occur.

China finally announced a recall, arrested several suspects, and fired a mayor and some other local officials. Maybe some fall guy will be executed, like last year’s execution of the head of China’s Food and Drug Administration and several of his deputies.

But that doesn’t begin to make up for the damage to infants or remedy the underlying problem that Communist Chinese companies will poison their products to sell them cheaper.

The globalists tell us: Don’t worry, none of Sanlu’s formula made it to the United States. But the poisoned pet food did; and Sanlu’s products reached Hong Kong, where supermarkets had to pull ice cream and frozen yogurt off their shelves.

Some of the media are telling us that the solution is to appropriate more money to the U.S. Food and Drug Administration. If the FDA had a budget a hundred times larger it could never inspect, regulate and assure the safety of Chinese products.

Phyllis Schlafly Eagles · #WYNK: China's Hooking Us on Fentanyl, TikTok | October 18, 2022 #ProAmericaReport The following is a transcript from the … END_OF_DOCUMENT_TOKEN_TO_BE_REPLACED

Elon Musk has 119 million followers on Twitter, the platform which he just bought for $44 billion. That’s more followers than Taylor Swift, whose … END_OF_DOCUMENT_TOKEN_TO_BE_REPLACED

Phyllis Schlafly Eagles · December 2 | The Past, Present, and Future of the War on Christmas Haul out the holly and bring out the boxing gloves. … END_OF_DOCUMENT_TOKEN_TO_BE_REPLACED

Phyllis Schlafly Eagles · December 1 | We Need More Badges Herschel Walker had an iconic moment in a debate with Sen. Raphael Warnock when he … END_OF_DOCUMENT_TOKEN_TO_BE_REPLACED