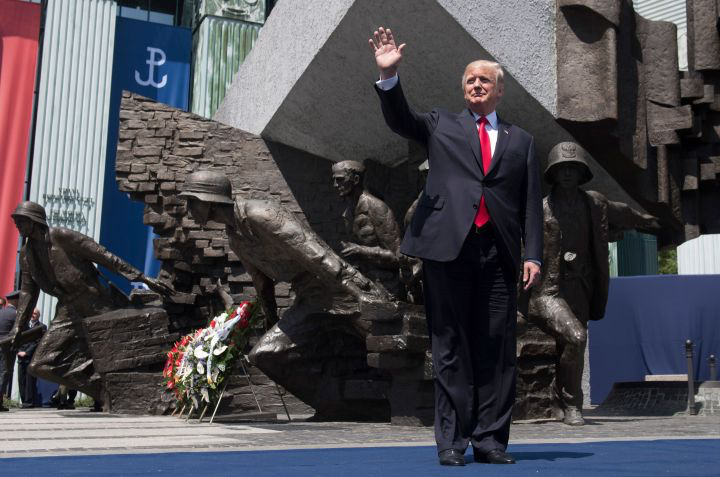 Can Western civilization survive? Does it even still exist? Liberal intellectuals have already consigned that term to the proverbial “ash heap of history” along with such ailments as racism, sexism, homophobia, Islamophobia, and colonialism.

The riches of our Western heritage are no longer taught in our public schools, studied in our colleges, or cited by our political leaders. The media insist on exaggerated gestures toward diversity and multiculturalism, denigrating “dead white males” and the English language, and constantly (but inaccurately) describing the United States as a “nation of immigrants.”

With one powerful speech, President Trump has changed the terms and tone of the entire discussion. He has made it not just acceptable, but necessary to speak and act in defense of the Western culture that made America.

Trump’s historic speech last week in Poland was of the same importance as Winston Churchill’s “Iron Curtain” speech in 1946, which marked the beginning of the Cold War, and Ronald Reagan’s “Tear Down This Wall,” which led to America’s victory in that war.

It’s no accident that President Trump chose Poland as the place for his powerful speech about civilization, culture, and borders. At key points in world history, the Polish nation has been on the front line of the never-ending battle against barbarism.

Surviving members of the “greatest generation” will remember how Poland was divided and dismembered by the two monsters of the twentieth century, Hitler and Stalin, following their “non-aggression pact” of August 23, 1939. Hitler crossed Poland’s borders from the west while Stalin invaded from the east, starting a new world war in Europe.

Trump harkened back to the valiant effort by the Polish Home Army to revolt against the Nazi occupation in 1944, which ended with the Nazis mercilessly destroying Warsaw. That uprising followed several years after the Katyn Forest massacre, in which the Soviet secret police rounded up 22,000 Polish reserve officers, who included doctors, lawyers, and other educated professionals, tied their hands behind their backs, fired a bullet to the back of their heads and buried them in mass graves.

Even after the defeat of Hitler’s Germany in 1945, Poland remained under Soviet domination for another 45 years. Poland threw off the Communist yoke in 1989, inspired by its native son, Pope John Paul II, who outmaneuvered official atheism to celebrate 1,000 years of Christianity in his homeland.

That was not the first time Poland helped to save Western civilization, also known as Christendom, against a barbarian invasion. Three centuries earlier, on September 11, 1683, an army led by the Polish king known as Jan III Sobieski defeated the Muslim invaders at the Gates of Vienna.

“The fundamental question of our time is whether the West has the will to survive,” Trump challenged Europe and America, adding, “Do we have enough respect for our citizens to protect our borders?” Poland, of all nations, knows that borders are essential and must be defended at all costs.

Trump’s speech was brilliant not only for what Trump said, but where he said it. The successful conservative leadership of pro-life Poland has become a model for the rest of Europe to follow, not abandon.

“Where are you going, Europe? Get up off your knees. Get out of your lethargy. Otherwise you will be crying every day for your children.” Those were not the words of President Trump, though they certainly could have been.

Instead, that quotation was from the conservative Polish prime minister, Beata SzydÅ‚o, in May in response to threats by the European Union to fine her country if she did not accept more refugees. Mrs. SzydÅ‚o properly stood up against what she called blackmail, and the Czech Republic, Hungary and Slovakia have also taken strong stances against opening their borders to migration.

“We are confronted by another oppressive ideology – one that seeks to export terrorism and extremism all around the globe. America and Europe have suffered one terror attack after another. We’re going to get it to stop,” Trump pledged to applause.

“We can have the largest economies and the most lethal weapons anywhere on Earth, but if we do not have strong families and strong values, then we will be weak and we will not survive,” Trump observed. He even praised innovation, which Phyllis Schlafly long recognized as essential to maintaining continued prosperity in the United States.

“Our own fight for the West does not begin on the battlefield – it begins with our minds, our wills, and our souls.” Trump explained that “our freedom, our civilization, and our survival depend on these bonds of history, culture, and memory.”

What You Need to Know is why Trump is not an echo of other candidates before him. Phyllis Schlafly famously first used that phrase — a choice, … END_OF_DOCUMENT_TOKEN_TO_BE_REPLACED

What You Need to Know is why Trump is not an echo of other candidates before him. Phyllis Schlafly famously first used that phrase — a choice, not an … END_OF_DOCUMENT_TOKEN_TO_BE_REPLACED

What You Need to Know is Democrats’ plan to slow down GOP investigations. David Brock (of Media Matters) released a memo detailing a group that will … END_OF_DOCUMENT_TOKEN_TO_BE_REPLACED

What You Need to Know is Fauci retires from the Covid Industrial Complex! He’s sneaking out under the cover of Thanksgiving and a no-news week. He … END_OF_DOCUMENT_TOKEN_TO_BE_REPLACED

President Biden and his Leftist administration have weaponized the Department of Justice (DOJ) for their political purposes to an intolerable extreme. … END_OF_DOCUMENT_TOKEN_TO_BE_REPLACED

Phyllis Schlafly Eagles · December 1 | We Need More Badges Herschel Walker had an iconic moment in a debate with Sen. Raphael Warnock when he … END_OF_DOCUMENT_TOKEN_TO_BE_REPLACED

What You Need to Know is Dems want a SWAT Team against the GOP? David Brock (formerly Media Matters) wants to beat up on Republicans in the House who … END_OF_DOCUMENT_TOKEN_TO_BE_REPLACED