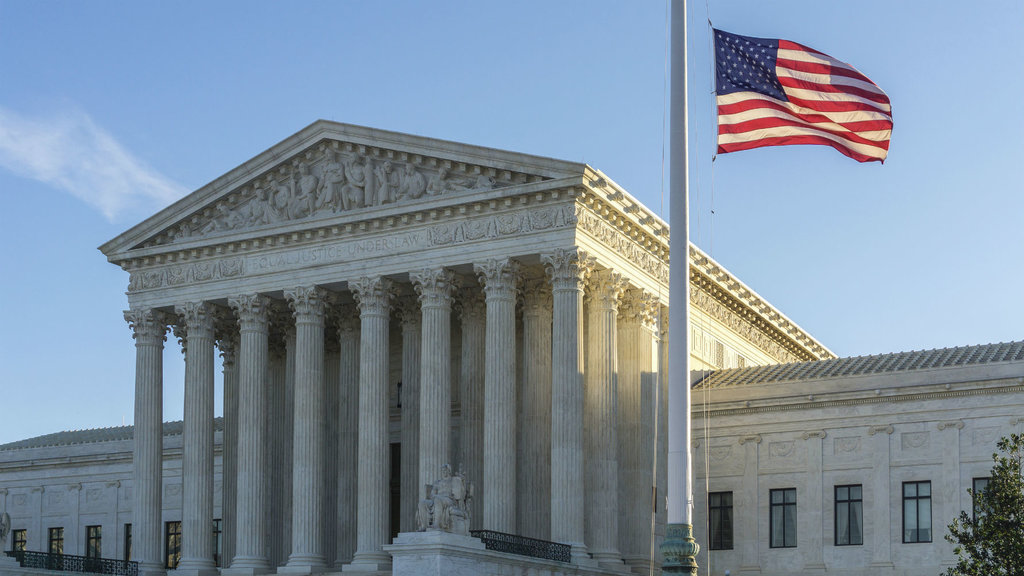 After being routed in the 2016 presidential primaries, a motley band of unreformed Never Trump Republicans gathered this week to make their last stand in the Supreme Court.  They are asking the court to overturn what, other than the wall on the Mexican border, was the most decisive promise of the Trump campaign.

The group includes Republicans who were prominent on the national scene ten, twenty and even thirty years ago, including former New Jersey Governors Tom Kean and Christine Todd Whitman, who publicly declared in February 2016 that “I know I won’t vote for Trump.”  Others, such as failed Utah candidate Evan McMullin, had a brief flicker of fame in 2016 before flaming out.

In case anyone needed a reminder why grassroots conservatives support Trump, the divide in the GOP on this case is conclusive evidence.  Phyllis Schlafly’s classic book, “A Choice Not An Echo,” explained how an Establishment within the Republican Party works perpetually to withhold power from the conservative wing of the Party.

Trump ended the insiders’ control of the GOP.  These filings by Republicans of yesteryear, however, illustrate that the Establishment is still fighting back.

Trump’s proposal for a temporary halt to immigration from Muslim countries was first announced in December 2015, following the massacre in San Bernardino, California, where a husband-and-wife team of legal Muslim immigrants shot and killed 14 people and seriously wounded 22 others at a Christmas party.

It was one of Trump’s campaign promises that drew wide support and helped Trump win the primaries and then the election.  After Trump became president, the campaign promise was refined (some would say watered down) in versions 1, 2 and 3 of an executive order, which is now before the Supreme Court.

Trump tweeted that his restrictions “should be far larger, tougher and more specific.”  Polling showed the public agreed more with Trump than with his detractors on this issue.

A Reuters/Ipsos poll, conducted immediately after Trump signed the first and strongest version of what has come to be known as the travel ban, found that 48% of Americans agreed and only 41% disagreed.  A Rasmussen poll of likely voters found 57% agreed and only 33% opposed.

Support for Trump increased when the current version of the policy was issued last summer.  Some 60 percent of Americans in an AP-NORC poll said they support the “new guidelines which say visa applicants from six predominantly Muslim countries must prove a close family relationship with a U.S. resident in order to enter the country,” while only 28 percent were opposed.

Among Republicans surveyed in the same poll, 84 percent of respondents supported the policy, while 9 percent opposed it.  That poll demonstrates that liberal Republicans who signed the briefs in the Supreme Court are out of step with the base, even in California where a recent poll by the University of California at Berkeley showed that 59% favor an increase in deportations.

Yet that public sentiment has not taken hold in many federal courts, and particularly not in the Obama-dominated Fourth and Ninth Circuits of the U.S. Court of Appeals.  The federal judiciary, which is supposed to be the “least dangerous” branch in terms of power, has embraced a relentless agenda to block Trump’s actions at every turn.

Time and time again, from as faraway places as the federal district court in Hawaii, activist judges repeatedly enjoined Trump’s travel ban.  Hawaii, of course, sees little harm from illegal aliens because so few can travel there, and California already benefits from a southern fence to stem the flow of illegal migration from Mexico.

The Supreme Court has allowed Trump’s restrictions to go into effect during the pendency of this appeal, so the Court should have no difficulty affirming presidential power to control our borders in this manner.  President Trump acted property to suspend, temporarily, migration from North Korea, Syria, Iran, Libya, Venezuela, Somalia and Yemen.

Yet the resistance to Trump’s protection of our country against foreigners continues to be intense, as the briefs filed in the Supreme Court opposing Trump far outnumber those which support him.  Even a group of former national security and so-called intelligence officials ask the Supreme Court to strike down Trump’s travel ban, despite how it obviously enhances our security by keeping potential enemies out.

Andrew C. McCarthy, as the former prosecutor of a terrorist, filed a brief in support of Trump’s position.  “At the end of the day,” he points out, “it is not the role of the judiciary to intercede in such matters, and this Court should clearly say so.”

Fourteen States, including immigrant-popular Texas and Arizona, weighed in with the Supreme Court to support President Trump’s travel ban.  The Court should listen to these States that are on the front lines of illegal migration into our country, and to the grassroots that support Trump.

What You Need to Know is Ray Epps was in on it! Who is Ray Epps? Congressman Jamie Raskin gave us the answer after the prompting by Congressman Thomas … END_OF_DOCUMENT_TOKEN_TO_BE_REPLACED

What You Need to Know to Understand is the danger of the Narrative Machine! Read this article from Tablet Magazine to help understand the connection … END_OF_DOCUMENT_TOKEN_TO_BE_REPLACED

What You Need to Know is Martha’s Vineyard CNN coverage is funny! 'They enriched us.' Migrants' 44-hour visit leaves indelible mark on Martha's … END_OF_DOCUMENT_TOKEN_TO_BE_REPLACED

What You Need to Know is the media is finally reporting on the Southern Border! Governor Ron DeSantis and Governor Greg Abbott are forcing the media … END_OF_DOCUMENT_TOKEN_TO_BE_REPLACED

Phyllis Schlafly Eagles · #WYNK: Who Is Congressman Troy Nehls? | September 28, 2022 #ProAmericaReport The following is a transcript from the Pro … END_OF_DOCUMENT_TOKEN_TO_BE_REPLACED

What You Need to Know is The Narrative Machine is Obsessed with Trump! First, it used to be called the Trump Exhaustion Syndrome now the left is … END_OF_DOCUMENT_TOKEN_TO_BE_REPLACED