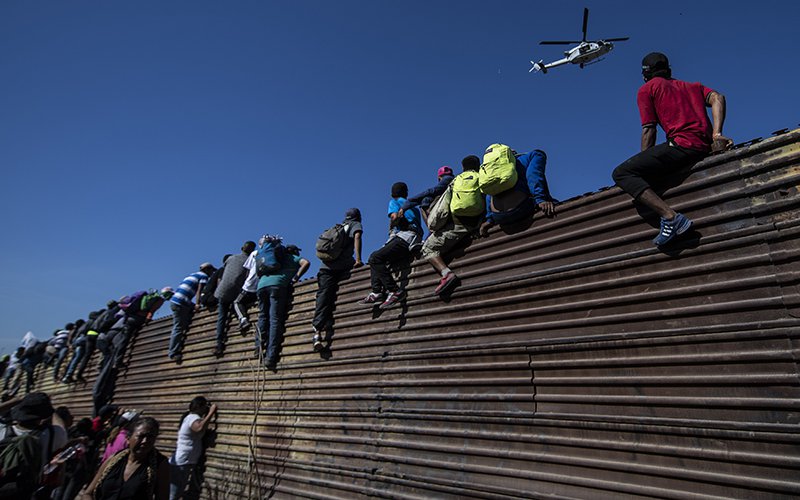 Now that President Trump has officially declared a state of emergency on our southern border, a lot of Americans are asking whether action like that can be truly justifiable. No matter how you look at it, the answer is a resounding yes. All you have to do is listen to the president’s own words. He said, “We have an invasion of drugs, invasion of gangs, invasion of people, and it’s unacceptable. It’s very simple. We want to stop drugs from coming into our country. We want to stop criminals and gangs from coming into our country.” Trump campaigned for president on securing the southern border of the United States, and he plans to do precisely that for the American people.

This is not some empty political anecdote either. These bad hombres really are pouring over our border every day.

This is not some empty political anecdote either. These bad hombres really are pouring over our border every day. Consider just one day’s traffic at a single section of the border that lacks a physical barrier. Among those caught crossing into Texas on one day were a Mexican previously convicted in Georgia for child molestation, a Honduran previously convicted in North Carolina for child molestation by a custodian, and another Honduran who was previously identified in Florida as a member of MS-13.

Immigration and Customs Enforcement reports that 266,000 aliens with criminal records have been arrested in the past two years. This agency also arrested 1,500 aliens for human trafficking and deported 10,000 gang members in the last fiscal year. Despite this hard data proving that ICE helps keep us safe, many politically-motivated Democrats say they want to abolish this protective agency.

On top of the criminal aspect, many illegal arrivals are very sick with contagious diseases. Their health problems commonly overwhelm the facilities available in small towns near the border. The Border Patrol reports that on a single day, over two thousand migrants had to be driven three hours to the nearest hospital for treatment.

Clearly, there is an emergency on our southern border. President Trump is right to do everything he can to protect American citizens from criminals and carriers of disease. Only a big wall can do the job, and President Trump is just the man to make it happen.

Democrats blamed Sen. Bernie Sanders for Hillary Clinton’s loss to President Trump in 2016. You’ve got to wonder, if Establishment Democrats were so … END_OF_DOCUMENT_TOKEN_TO_BE_REPLACED

The world was rocked by the rapid spread of the infamous and infectious coronavirus. Let’s not forget that this deadly pathogen originated from the … END_OF_DOCUMENT_TOKEN_TO_BE_REPLACED

Thanks to globalism, the coronavirus easily swept across the world like a wildfire. Exposure quickly jumped from open border to open border, … END_OF_DOCUMENT_TOKEN_TO_BE_REPLACED

Alexander Hamilton identified “energy in the executive” as a key benefit of the newly created office of President of the United States, and even his … END_OF_DOCUMENT_TOKEN_TO_BE_REPLACED

FOR IMMEDIATE RELEASE: NOVEMBER 3, 2020CONTACT: RYAN HITE, COMMUNICATIONS DIRECTOR President Trump has kept his promises. We must keep our … END_OF_DOCUMENT_TOKEN_TO_BE_REPLACED

What You Need To Know is Republicans have the tools to fight! Our job is to help fight through the fake news and the fake politics and here’s some … END_OF_DOCUMENT_TOKEN_TO_BE_REPLACED

What You Need To Know is the #StopTheSteal effort is strong! People are fired up and grassroots are exploding right now because We the People are … END_OF_DOCUMENT_TOKEN_TO_BE_REPLACED