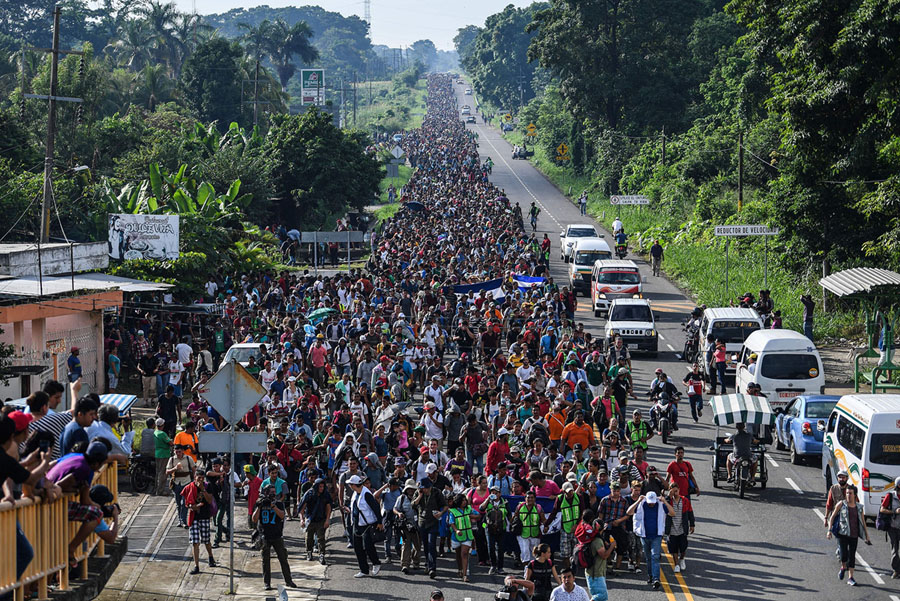 Democrats have not been shy to criticize President Trump on every imaginable issue ranging from the NFL to the First Lady’s choice of footwear.  But suddenly nary a word from the Dems about Trump’s criticism of the caravan of illegal aliens headed toward our southern border.

“Every time you see a Caravan, or people illegally coming, or attempting to come, into our Country illegally, think of and blame the Democrats for not giving us the votes to change our pathetic Immigration Laws! Remember the Midterms!” Trump tweeted on Monday.

But where is the pervasive pushback by Dems to Trump’s tweets on this issue?  Their silence is deafening.

The Senate race in Arizona casts light on why Democrats are suddenly speechless, two weeks before the midterm elections.  That seat, vacated by the unelectable anti-Trump Senator Jeff Flake, has long been considered a sure takeaway from the Republican Party in the battle for control of the U.S. Senate.

This summer the Democratic candidate Kyrsten Sinema was ahead in the polls by more than ten points, apparently cruising to a landslide.  But Arizona bears the brunt of illegal immigration, and as that issue heats up this race has become too close to call.

Congresswoman and veteran Martha McSally, aided by an overflow rally held by President Trump last week in Phoenix, has surged in the polls for that seat.  Ms. Sinema was hurt by the surfacing of a 2003 recording of her saying that “I don’t care” if an American joined the Taliban army, which fights against U.S. forces in Afghanistan. 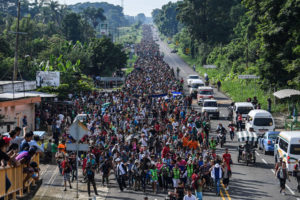 Honduran migrants take part in a caravan heading to the US, on the road linking Ciudad Hidalgo and Tapachula, Chiapas state, Mexico, on October 21, 2018. – Thousands of Honduran migrants resumed their march toward the United States on Sunday from the southern Mexican city of Ciudad Hidalgo, AFP journalists at the scene said. (Photo by Pedro Pardo / AFP) (Photo credit should read PEDRO PARDO/AFP/Getty Images)

In Missouri, entrenched liberal incumbent Claire McCaskill was so rattled by Republican challenger Josh Hawley’s criticism of her during their recent debate that she left quickly afterward, not even staying for post-debate interviews.  Pro-abortion donors have bankrolled McCaskill to a 4-1 fundraising advantage, and yet she trails Hawley.

Meanwhile, voters see photos of thousands of menacing youths approaching our southern border as part of a caravan that stretches for miles.  Among them are potential new recruits for the vicious gangs, like MS-13, that plague our cities.

If Sen. McCaskill and her Democratic cohorts had supported building a wall as Trump seeks, then the massive caravan would not be a national crisis.  But without a wall, young American soldiers must be put in harm’s way to try to stop these illegals from entering our country.

The presence of children among the migrants makes it even worse.  Soldiers are trained to fight and kill, not change diapers for infants carted thousands of miles to cross our border illegally.

“We want to get to the United States,” said a 17-year-old migrant from Honduras, Maria Irias Rodriguez, who brings along her 8-month-old daughter and 2-year-old son, plus her husband. “If they stop us now, we’ll just come back a second time.”

That sounds like a family that could help make Honduras great again.  If the migrants have American values, and not all do, then they could spread those values in their own country and help it thrive as the United States has.

There is a process for foreigners to apply to enter our country legally.  That includes proper vetting of the applicants, and separating those who love America from those who might not.

Amid the caravan of many thousands could be terrorists, as President Trump pointed out while on his way to lead a massive rally in Houston for Senate candidate Ted Cruz.  The 19,000-seat Houston Rockets basketball arena was virtually filled with enthusiastic supporters of Trump’s stance against the caravan and illegal immigration.

But Monday was also the first day of an extended two-week early voting period in Texas, which enables the Democratic political machine to stuff the ballot box without any real safeguards against fraud.  An enormous spike in the number of early ballots compared to the last midterm election in 2014 is flooding Texas election offices.

Liberals are counting on rampant early voting in Texas, California, Nevada, Colorado, and elsewhere to give them an undeserved boost in returns.  Trump has joked that the caravan of migrants is coming to the United States to vote for Democrats, and that is not far from the truth.

In traditionally low-turnout midterm elections, stuffing the ballot box can change the outcome in many races.  Trump’s spectacular rallies demonstrate the popularity of his positions with the American people, and an honest election would confirm it.

What You Need to Know is Kendi gets paid! Fairfax, Va. School District Spent $24,000 On Ibram Kendi Books For U.S. History Classes. And the … END_OF_DOCUMENT_TOKEN_TO_BE_REPLACED

What You Need To Know about the 2 vaccine mandates. Andrea Kaye, guest host of the #ProAmericaReport, explains how SCOTUS is adding another day to … END_OF_DOCUMENT_TOKEN_TO_BE_REPLACED

What You Need To Know is January 6th has been politicized. Andrea Kaye, guest host of the #ProAmericaReport, talks about January 6th as we go into the … END_OF_DOCUMENT_TOKEN_TO_BE_REPLACED

What You Need To Know is the history of the covid narrative. Andrea Kaye, guest host of the #ProAmericaReport, gives a list of the narrative that the … END_OF_DOCUMENT_TOKEN_TO_BE_REPLACED

What You Need To Know is it’s not the Federal Government's job to control your health! Guest Host Andrea Kaye says it’s your right to control your own … END_OF_DOCUMENT_TOKEN_TO_BE_REPLACED

If the education establishment wants to know why public schools don't get much respect from our citizenry, they need look no further … END_OF_DOCUMENT_TOKEN_TO_BE_REPLACED

Robert Strange McNamara belongs on the daytime soap operas. Better yet, his histrionics belong on Donahue or Geraldo or Sally Jesse Raphael. We are … END_OF_DOCUMENT_TOKEN_TO_BE_REPLACED