Today is the 23rd anniversary of the fall of the Berlin Wall. It was on November 9, 1989 that the Soviet Union announced that people could freely cross the Wall from Communism into freedom. President Ronald Reagan's greatest achievement was to bring about the collapse of the Soviet Empire — and it was a stunning event. Anyone who might have predicted this when Reagan became President in 1981 would have been pitied as a little nuts. Hardly anybody believed the Soviet Union would collapse in our lifetime. 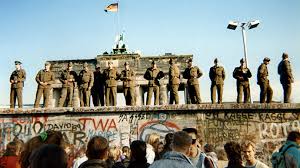 In the years preceding Reagan's presidency, U.S. foreign policy was dictated by Henry Kissinger who believed that the Soviet Union would always be the world's one superpower, and that his job was to negotiate the best second place for the United States. Kissinger believed we had to accept a future built on Nikita Khrushchev's "peaceful coexistence," Richard Nixon's detente, Mikail Gorbachev' s perestroika, and treaties that accepted U.S. strategic inferiority to the Soviet Union.

When Ronald Reagan came to office, his strategy was completely different. It was "We win, they lose." In 1983 he dared to label the Soviet Union an "evil empire." He designed our nation's future built on victory over Communism. That attitude was what led him to go to Berlin in 1987 and dare to say, "Mr. Gorbachev, tear down this Wall." Reagan wrote those words into the speech himself. Reagan was the architect

of the awesome victory that took place in the first year after he finished his term. As Margaret Thatcher summed it up, "Ronald Reagan won the Cold War without firing a shot." ·

Victory over Communism happened because Reagan demanded it, both in rhetoric and in policy decisions, and millions of people owe their freedom today to the vision and the courage of a true leader, Ronald Reagan.

Phyllis Schlafly Eagles · #WYNK: Fake History is a Real Problem | August 31, 2022 #ProAmericaReport The following is a transcript from the Pro … END_OF_DOCUMENT_TOKEN_TO_BE_REPLACED

What You Need to Know about Three big things happening this week! 1) Merrick Garland's appearance is weak and career-ending. He will likely be out of … END_OF_DOCUMENT_TOKEN_TO_BE_REPLACED

Phyllis Schlafly Eagles · #WYNK: Be A Doer — Kitty Werthmann | July 15, 2022 #ProAmericaReport The following is a transcript from the Pro America … END_OF_DOCUMENT_TOKEN_TO_BE_REPLACED

Phyllis Schlafly Eagles · #WYNK: Who Is Congressman Troy Nehls? | September 28, 2022 #ProAmericaReport The following is a transcript from the Pro … END_OF_DOCUMENT_TOKEN_TO_BE_REPLACED