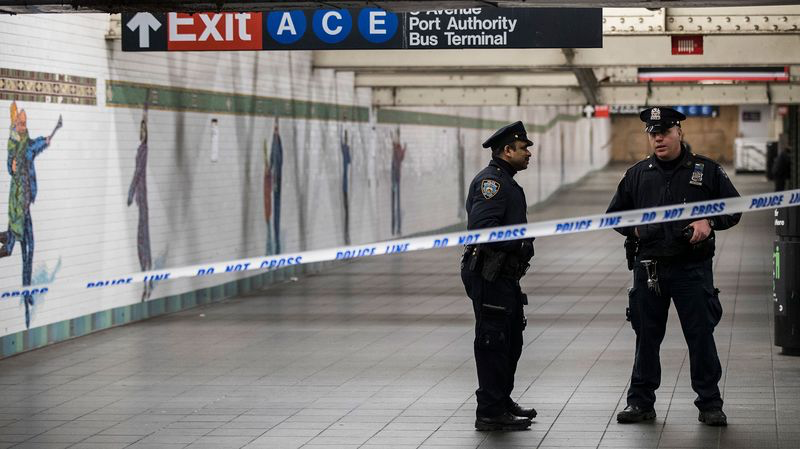 “There have now been two terrorist attacks in New York City in recent weeks carried out by foreign nationals here on green cards,” President Trump told an impromptu news conference on Tuesday.  “The first attacker came through the visa lottery and the second through chain migration.

The first terrorist attack occurred six weeks ago, on Halloween, when Sayfullo Saipov, a Muslim immigrant from Uzbekistan, drove a rented truck

through a crowd of pedestrians and cyclists, killing 8 and injuring 12.  Saipov had sworn allegiance to ISIS and reportedly asked to display the ISIS flag in his hospital room where he was recovering from a gunshot wound.

Saipov came to the United States in 2010 after winning the annual lottery for 50,000 visas which our government foolishly grants to people from the most diverse countries, defined as those that sent fewer than 50,000 immigrants to the United States during the previous five years.  Over a million people without skills have received one of these so-called diversity visas since the program began, and the average recipient brings three relatives to settle here permanently.

In the latest attack Monday morning, Akayed Ullah, a Muslim immigrant from Bangladesh, set off a pipe bomb in the crowded tunnel that links Times Square to the nation’s busiest bus terminal, which serves over 200,000 passengers each weekday.  Ullah reportedly told police that he chose that location partly because he was triggered by nearby Christmas posters.

Ullah came to the United States in 2011 after qualifying for an F43 visa as the child of a sibling of a U.S. citizen (his uncle) through what’s called “extended family chain migration.”  He was one of 141,501 immigrants who have entered the U.S. from Bangladesh through chain migration since 2005, an astounding number equal to the population of Dayton, Ohio.

The same day the President vowed to end the visa lottery and chain migration, Attorney General Jeff Sessions said the men who committed the two New York attacks were in the United States “as a result of failed immigration policies.”  As Sessions explained, this “20-year-old son of the sister of a U.S. citizen should not get priority to come to this country ahead of someone who is high-skilled, well educated, has learned English, and is likely to assimilate and flourish here.”

President Trump points out that the United States “must fix its lax immigration system, which allows far too many dangerous, inadequately vetted people” into our country.  Trump was elected president in large part because Americans applauded the strength of his commitment to put Americans first and protect our borders against politically correct notions of multiculturalism and diversity.

Congressman Steve King recently echoed an observation made by the prime minister of Hungary that diversity can lead to a lower quality of life, not a higher one.  What is needed is not diversity as much as assimilation, in order to remain a secure and prosperous nation.

“Assimilation has become a dirty word to the multiculturalist Left,” King wisely observed. “Assimilation, not diversity, is our American strength."

Supporters of diversity insist that immigrant terrorists became radicalized after they arrived in the United States.  Even if true, that’s all the more reason to oppose such immigrants because they are not assimilating themselves into our society, and instead are trying to destroy it.

The Boston Marathon bomber, Tamerlan Tsarnaev, is cited as an example of someone who supposedly became a terrorist after coming to America, but Tsarnaev was probably trained by his trip to the Chechen region of Russia in 2012.  He was then allowed back into the United States despite his highly suspicious stay abroad, and the House Homeland Security Committee Chairman, Michael McCaul, expressed dismay at why the FBI did not pick up on this.

Akayed Ullah repeatedly traveled to Bangladesh in recent months before initiating his attack here.  Is this the same mistake, which was made in letting Tsarnaev back in after a suspicious trip abroad, being made again and again?

One of the first executive orders by President Trump was to issue his so-called travel ban to restrict immigration from certain countries associated with terrorism.  Liberals then filed multiple lawsuits to block his Executive Order from going into effect.

What You Need to Know is Pelosi is Wrong or Lying. The archbishop came out saying that Speaker Nancy Pelosi will be denied Holy Communion because of … END_OF_DOCUMENT_TOKEN_TO_BE_REPLACED

What You Need to Know is the Border is about to be totally open! In just a few days we are going to see around 18,000 illegal aliens crossing our … END_OF_DOCUMENT_TOKEN_TO_BE_REPLACED

For Immediate Release: May 27, 2022Contact: Ryan Hite, Communications Director Pro-Life Americans Will Not Be Silenced By Pro-Abortion Scare … END_OF_DOCUMENT_TOKEN_TO_BE_REPLACED

Phyllis Schlafly Eagles · May 27 | A Horror Story in Washington, D.C. A horror story unraveled in our nation’s capital that would leave any … END_OF_DOCUMENT_TOKEN_TO_BE_REPLACED