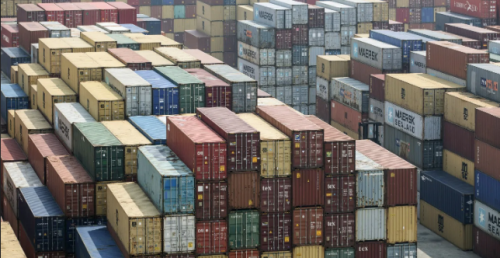 Tariffs were once regarded as right and necessary for this nation as protective measures necessary for economic growth. As a matter of historical fact, protectionism was the position of almost all the Founding Fathers. By the early part of the 1800s, there was not what would today be termed a “free trader” in the bunch.

George Washington had this to say:  A free people … should promote such manufactories as tend to render them independent on others for essentials, particularly military supplies.

Thomas Jefferson wrote in an 1815 letter to John-Baptists Say, a French economist:

The prohibiting duties we lay on all articles of foreign manufacture which prudence indeed requires us to establish at home, with the patriotic determination of every good citizen to use no foreign article which can be made within ourselves, without regard to difference of price, secures us against a relapse into foreign dependency.

“Give us a protective tariff and we will have the greatest nation on earth.” Lincoln warned that “the abandonment of the protective policy by the American Government… must produce want and ruin among our people.”

Lincoln similarly said: “If a duty amount to full protection be levied upon an article” that could be produced domestically, “at no distant day, in consequence of such duty,” the domestic article “will be sold to our people cheaper than before.”

Based on economies of scale, Lincoln argued that

any temporary increase in costs resulting from a tariff would eventually decrease as the domestic manufacturer produced more.

Lincoln did not see a tariff as a tax on low-income Americans because it would only burden the consumer according to the amount the consumer consumed.

“Under free trade the trader is the master and the producer the slave. Protection is but the law of nature, the law of self-preservation, of self-development, of securing the highest and best destiny of the race of man.[83] [It is said] that protection is immoral…. Why, if protection builds up and elevates 63,000,000 [the U.S. population] of people, the influence of those 63,000,000 of people elevates the rest of the world. We cannot take a step in the pathway of progress without benefiting mankind everywhere.”

For McKinley. free trade destroys the dignity and independence of American labor… It will take away from the people of this country who work for a living, and it will take from them heart and home and hope. It will be self-destruction.  McKinley also rejected the “cheaper is better” argument outright.

As noted above, tariffs are what kept America’s manufacturing alive.  It provided our people with decent jobs, and it gave us the ability to purchase quality goods produced by American owned companies.

Most people do not realize that tariffs once supported the entire cost of running our country for a period of 126 years until a federal income tax was imposed.

Passed by Congress on July 2, 1909, and ratified February 3, 1913, the 16th amendment established Congress’s right to impose a Federal income,  which is a far cry from what our founders envisioned for America’s citizens.  Prior to 1913, Americans were responsible for themselves and independent enough to know that their future depended not on the government, but solely on themselves.

Protectionism falls out of favor

It was after World War II when this nation began switching from a policy of protection, to one of “free trade.”

Those who believe that America’s economic tradition has been economic liberty and wide-open cowboy capitalism to include free trade are not dealing with reality. All four presidents on Mount Rushmore, Washington, Jefferson, Theodore Roosevelt and Lincoln, were protectionist making protectionism the real American way:

International trade deals were used as a means of diplomacy and alliance-building, which slowly has eroded and ultimately destroyed America’s status as the world’s dominant manufacturing power.   The U.S. promoted the General Agreement on Tariffs and Trade (GATT) in 1947 to minimize tariffs and other restrictions and to liberalize trade among all capitalist countries. In 1995 GATT became the World Trade Organization (WTO), when with the collapse of Soviet communism its open markets/low tariff ideology became dominant worldwide in the 1990s. Without former protective tariffs, many rust belt industries faded or collapsed, especially the manufacture of steel, TV sets, shoes, toys, textiles clothing, and the car industry.

In 1992, ads in local newspapers encouraged businesses to transfer their manufacturing to Honduras, El Salvador, the Caribbean Basin International Development Zone, and the Dominican Republic and Haiti.  These were International Free Trade Zones and Port Industrial Free Zones. This included Mexico.  Hundreds of companies moved their plants out of our country, and this was 27 years ago.

“In the initial stages of Westernization, China was exempted from criticism over serial copyright and patent infringement, dumping, and espionage.”

“Somehow, we forgot that nations that copy the West do not do so out of empathy or veneration. More often, they pick and choose what to buy, steal, or copy, entirely in their own interest. They often see superior Western science arising despite, not because of, Western freedom, and therefore they think it can be improved upon when grafted to a properly authoritarian or totalitarian root.”

When President Donald J. Trump announced the U.S. would impose a 25 percent border tax on Chinese imports, he fulfilled the promise he made to the American people to put America First.  His action shows we have a president who is standing up for the working men and women of America, not the business interests of a small slice of the corporate sector.

Multiple forms of ongoing Chinese aggression have been played down by media commentators, including the following:

Trump’s action against China is more than about cheap T-shirts and TVs. It’s about our country and our way of life, as the People’s Republic of China is striving to become the leading power in the world.

On February 20, 2019, Asia expert, Gordon Chang on Fox Business with Lou Dobbs urged President Trump to remain strong on tariffs and to continue pressure on the Chinese as the only way to prevent Chinese theft and trade imbalance.   Chang told Dobbs, “We have seen so many trade negotiations between previous presidents and the Chinese. They have all failed. The Chinese have violated every single agreement. This is really important for us. This is where we either stand or we fail, and the only thing that’s going to get us there is President Trump.”

The Mexican Border and Trade

The Never-Trumpers tell us the cost of raising tariffs on China and Mexico will be passed along to the American consumer, but what about the war Mexico has been waging on the American consumer for decades, first by sending us their poor and their criminals and now by passing along the same from Central America.

President Trump threatened tariffs on Mexico being raised every single month until something was done by Mexico to stop them.  According to the State Department, Mexico agreed to dispatch 6,000 national guardsmen at the border with Guatemala to block migrants from reaching the United States and expand a Trump administration program that holds thousands of asylum-seekers in Mexico during U.S. immigration processing.  Over 90 percent of those released into America never appear in court and    remain in America illegally.

If Mexico’s actions “do not have the expected results,” additional measures could be taken within 90 days, and the two countries will continue to discuss add-on steps during that period.  This includes tariffs on Mexican goods coming into our country increasing every month until this influx of illegal aliens is quelled.   Without our President and without these tariff threats, there would have been no deal.

It’s time for America to put thousands upon thousands of National Guard troops on our border again, armed with equipment to prevent the surge of illegals from entering our country.

In his 1998 book, The Great Betrayal, Pat Buchanan makes this very point:

“The most perilous aspect [of free trade] … is the loss of U.S. sovereignty and the potential loss of nationhood itself.

Look at Europe. Nations there are meekly transferring control of their defense and foreign policy, of trade and immigration policy, to a super-state called the European Union; they are even giving up control of their currencies, which means control of their destinies. And what is happening to France, Britain, Germany, Italy, will happen here if we do not wake up. Once a nation has put its foot onto the slippery slope of global free trade, the process is inexorable, the end inevitable: death of the nation-state.”

Tariffs are the answer.  The only way our nation can regain control of trade that benefits American citizens is through tariffs.  Neither China nor Mexico will cave to our demands unless they suffer the consequences of American tariffs.

To right the wrongs can be painful for a short time, but in the long run will revive and restore our country.

Phyllis Schlafly Eagles · #WYNK: China's Hooking Us on Fentanyl, TikTok | October 18, 2022 #ProAmericaReport The following is a transcript from the … END_OF_DOCUMENT_TOKEN_TO_BE_REPLACED

Phyllis Schlafly Eagles · December 9 | Are Supporters of America First Scrooges? It’s going to be a long, cold winter in the United States, but … END_OF_DOCUMENT_TOKEN_TO_BE_REPLACED

What You Need to Know is Mom first! Life begins at conception. But what if the pro-life movement reframed the battle. What if we advertised that life … END_OF_DOCUMENT_TOKEN_TO_BE_REPLACED

Predicting an imminent worldwide recession, global business elites convene at the Alps ski resort of Davos, Switzerland as they do every year in … END_OF_DOCUMENT_TOKEN_TO_BE_REPLACED

What You Need to Know is we are in a proxy war with Russia. Until now, we’ve been able to at least try to say we have given Ukraine defense weapons … END_OF_DOCUMENT_TOKEN_TO_BE_REPLACED

What You Need to Know is a lesson on documents and double standards. Suddenly everyone has classified documents and everyone is spinning the stories … END_OF_DOCUMENT_TOKEN_TO_BE_REPLACED

What You Need to Know is to thank the Freedom 20 who took up the House Speaker fight last week. Get the list here — it only takes 3-5 minutes … END_OF_DOCUMENT_TOKEN_TO_BE_REPLACED

Phyllis Schlafly Eagles · #WYNK: Documents and Double Standards | January 24, 2023 #ProAmericaReport The following is a transcript from the Pro … END_OF_DOCUMENT_TOKEN_TO_BE_REPLACED

For Immediate Release: January 26, 2022Contact: Ryan Hite, Communications Director Solution Staring Us In the Face to Save American Lives: Shut the … END_OF_DOCUMENT_TOKEN_TO_BE_REPLACED