In April 1990, the Berlin Wall was being torn down to let East Germans travel to their family, friends, and countrymen in the West for the first time since 1961. This wall, which served as the preeminent icon of Communist oppression, was not strong enough to withstand the resistance of the oppressed people who longed for freedom for themselves and their children. Phyllis Schlafly figuratively stood side by side with those oppressed Germans throughout the entirety of their captivity. She dedicated many long hours to the fight against Communism, both abroad and right here in America. So, when the wall finally fell, she felt it only right to take a victory lap in the April 1990 Phyllis Schlafly Report, which boldly proclaimed the headline “The Anti-Communists Were Right, After All.” In it, she published a great “I told you so” for the entire world to see that conservatives had it right when they said freedom will prevail against Communist tyranny.

However, it would not be accurate to say that Phyllis wrote the April 1990 PSR purely as an opportunity to gloat. She wanted to remind Americans of Communist atrocities so we would never forget the threat that Communist ideology poses to humankind. She recognized that the Communist threat was far from over. Indeed, today’s headlines prove that to be the case. Just as was the case in Berlin, the Iron Curtain of communism, manifested in a large physical wall, separate oppressed North Korean citizens from their family, friends, and countrymen in the south. Communist leaders in North Korea have gone beyond oppressing their own people and have now begun to make threats on the United States and our territory of Guam. The possibility of millions of deaths from a nuclear war does not phase North Korea any more than millions of deaths phased communists in China or the Soviet Union. Phyllis said, “Events have proved Ronald Reagan right in labeling the Soviet Union the ‘evil empire.’ Communism is, indeed, the most evil force in the 20th century: reliable estimates of its victims are 20 million in the Soviet Union, as well as 50 million in China.” Phyllis was wise to point out the rightness of conservatives on the communist threat because the fight against communists is more than a so-called “McCarthyistic witchhunt;” it is a fight to protect the rights and lives of millions against an objectively evil force.

Although Communism is a grave threat to society, that is all the more reason to celebrate the triumph of people in the struggle for freedom. Although communists painted themselves as the inevitable wave of the future, Phyllis was proud to proclaim in the victorious year of 1990 that “This Communist myth was finally exposed for the lie it always was. It became obvious to all that Communism and socialism are bankrupt; they have failed politically and economically. History is now clearly on the side of freedom from government, and the aging commissars of Communism are falling into the dustbins of history.” For the free people that will remain vigilant, the principles of Communism and socialism stand no chance.

If we are to stop the open call for socialism that has been manifesting in America, we must look to our history. In history, we can find everything we need to know about the economic and moral superiority of freedom over Communism and socialism. From the failure of Chairman Mao’s “Great Leap Forward” to the victory of the United States in the Space Race to the fall of the Berlin Wall, it is clear to see that history is on the side of freedom. If we are to combat these terrible ideas that continue to pop up in the progressive Left, we must do as Phyllis Schlafly did and embrace the lessons of our history. Whether from external threats like North Korea or internal threats on the socialist Left, the vindication of our anti-Communist predecessors depends on us.

To view the April 1990 issues of the Phyllis Schlafly Report in their entirety, please click on the images below. 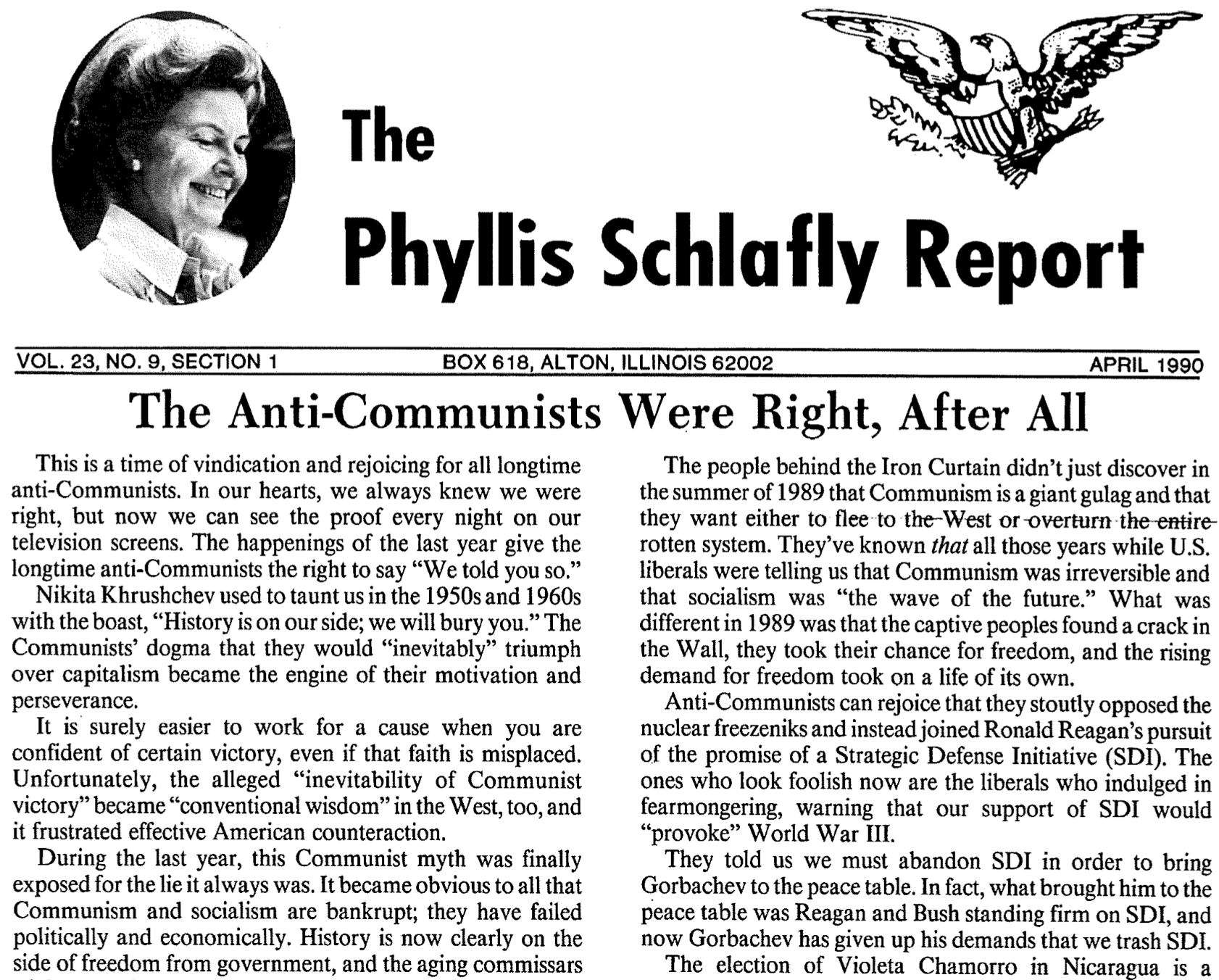 Phyllis Schlafly Eagles · #WYNK: Fake History is a Real Problem | August 31, 2022 #ProAmericaReport The following is a transcript from the Pro … END_OF_DOCUMENT_TOKEN_TO_BE_REPLACED

What You Need to Know is Europe is setting up their own CIA. The public claims are that this is to fight Chinese spying, but the reality is this new … END_OF_DOCUMENT_TOKEN_TO_BE_REPLACED

What You Need to Know is Democrats’ plan to slow down GOP investigations. David Brock (of Media Matters) released a memo detailing a group that will … END_OF_DOCUMENT_TOKEN_TO_BE_REPLACED

What You Need to Know is why Trump is not an echo of other candidates before him. Phyllis Schlafly famously first used that phrase — a choice, … END_OF_DOCUMENT_TOKEN_TO_BE_REPLACED

Elon Musk has 119 million followers on Twitter, the platform which he just bought for $44 billion. That’s more followers than Taylor Swift, whose … END_OF_DOCUMENT_TOKEN_TO_BE_REPLACED

What You Need to Know is what’s right in America! We talk so much about what’s wrong in America and how broken our elected officials are — there’s a … END_OF_DOCUMENT_TOKEN_TO_BE_REPLACED

What You Need to Know is about the ethics of power, not the ethics of truth. That's the political situation we are facing! The left pursues power no … END_OF_DOCUMENT_TOKEN_TO_BE_REPLACED