When the history books talk about Phyllis Schlafly, they will talk about what she did. They will talk about launching the modern conservative movement, defeating ERA, defending the American family, protecting the rights of parents and students in education, and a slew of other accomplishments. However, I hope history does not forget to remember Phyllis for the way she thought. She had an inexplicable ability to hear the voice of the American people before the polls ever opened and vocalize what the silent majority was saying before the election cycle ever began. She knew what Americans cared about and offered sage advice to Republicans who wanted to know what it would take to win the hearts of the people. She knew that Americans truly do want a choice, not an echo.

One way that she dispensed her unmatched political savviness was through her Phyllis Schlafly Report. Not a presidential election went by without Phyllis explaining why candidates won or lost. While it might not seem very impressive to “Monday morning quarterback” a presidential election, the December 2012 Phyllis Schlafly Report proved its clairvoyance in 2016 with the election of President Donald Trump. Let’s take a look at the almost eerie premonition of Trump’s campaign strategy found in Phyllis’s final critique of a presidential campaign.

In diagnosing why Mitt Romney lost to Barack Obama, the very first reason Phyllis Schlafly brought up was Mitt’s failure to connect with middle-class working Americans. When explaining why this crucial voting bloc largely stayed home for the election, she wrote “They decided there isn’t any difference between the two major parties, and on the crucial economic issue of loss of good middle-class jobs, there apparently isn’t.” Obama used Romney’s propensity for ignoring blue collar workers to paint a “country club” picture of Republicanism through negative marketing. Barack Obama was no “man of the people,” but in all fairness, there was no reason for workers to identify with a Republican who would not stand for American manufacturing either. By contrast, Donald Trump took a strong stance in favor of the American worker and the need to maintain a climate in our nation that is not hostile to business.

Phyllis’s second major criticism of the 2012 Republican campaign was its soft position on immigration. She said that while the Republican Establishment wanted to soften Republican stances against amnesty and border security, “that’s a deadend road that translates into more Democratic, not Republican, votes.” Her claim was supported by what is possibly the most famous (or infamous) Republican capitulation on immigration in history, namely Ronald Reagan’s 1986 amnesty law. After that legislation gave amnesty to illegal immigrants on an unprecedented scale, the Hispanic vote actually decreased by nearly fifty percent in the following presidential election. Clearly, pandering to illegal aliens did not win any votes for the Republican Party. By contrast, Donald Trump campaigned hard for common sense immigration measures which will protect American citizens.

It should be seen as no coincidence that the two most prominent issues of the 2016 Trump campaign were also the two most prominent issues Phyllis said were missing from the 2012 Romney campaign. There can be no question that Phyllis had insight years in advance of the eventual Trump victory. She said “the voting bloc that Mitt Romney ignored, but which Republicans must recapture if they ever want to win again, is the blue-collar men without a college degree who had well-paid manufacturing jobs until the free traders shipped those jobs overseas.” When you look at 2016 in hindsight, it is clear to see that those same blue-collar workers carried Trump to victory in such key swing states as Michigan and Pennsylvania. Everyone, regardless of their position on the political spectrum, agrees that the 2016 presidential election is one for the record books. We should likewise agree that the story of the 2016 presidential election starts with the December 2012 Phyllis Schlafly Report and the amazing woman who authored it.

To view the December 2012 Phyllis Schlafly Report in its entirety, please click on the image below. 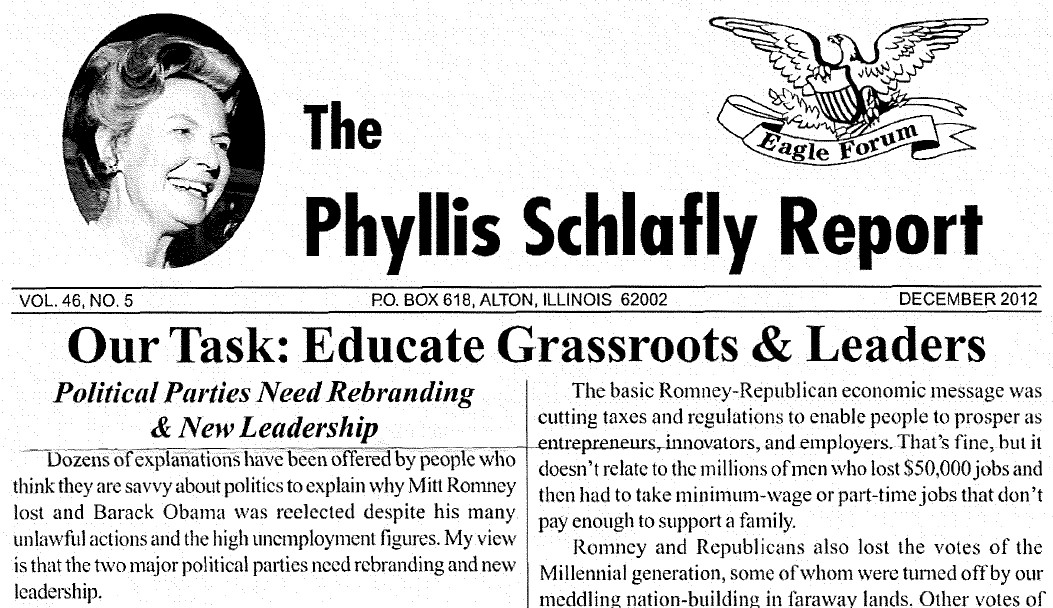 What You Need to Know is thank Trump for the end of Roe v. Wade. As great as the March for Life was last week and excited as my family was to … END_OF_DOCUMENT_TOKEN_TO_BE_REPLACED

What You Need to Know is Joe Biden’s ego will be his undoing. He should drop executive privilege and get this classified documents investigation over … END_OF_DOCUMENT_TOKEN_TO_BE_REPLACED

Phyllis Schlafly Eagles · #WYNK: Trump is Stronger Than Biden | January 27, 2023 #ProAmericaReport The following is a transcript from the Pro … END_OF_DOCUMENT_TOKEN_TO_BE_REPLACED

What You Need to Know is Trump is stronger than Biden. Our American leaders sending tanks and weapons to escalate the war in Ukraine aren’t in line … END_OF_DOCUMENT_TOKEN_TO_BE_REPLACED

Phyllis Schlafly Eagles · #WYNK: Documents and Double Standards | January 24, 2023 #ProAmericaReport The following is a transcript from the Pro … END_OF_DOCUMENT_TOKEN_TO_BE_REPLACED

What You Need to Know is that Trump’s taxes are a nothingburger. The House has released the documents! The long-awaited Trump tax returns are out, and … END_OF_DOCUMENT_TOKEN_TO_BE_REPLACED

What You Need to Know is it’s Election Day! The media isn’t going to stop adjusting the news to report what will benefit them — Politico: Biden, Trump … END_OF_DOCUMENT_TOKEN_TO_BE_REPLACED

Phyllis Schlafly Eagles · November 4 | TikTok Trends Bash the Workplace I may not be the world’s leading expert on the latest TikTok trends, but … END_OF_DOCUMENT_TOKEN_TO_BE_REPLACED