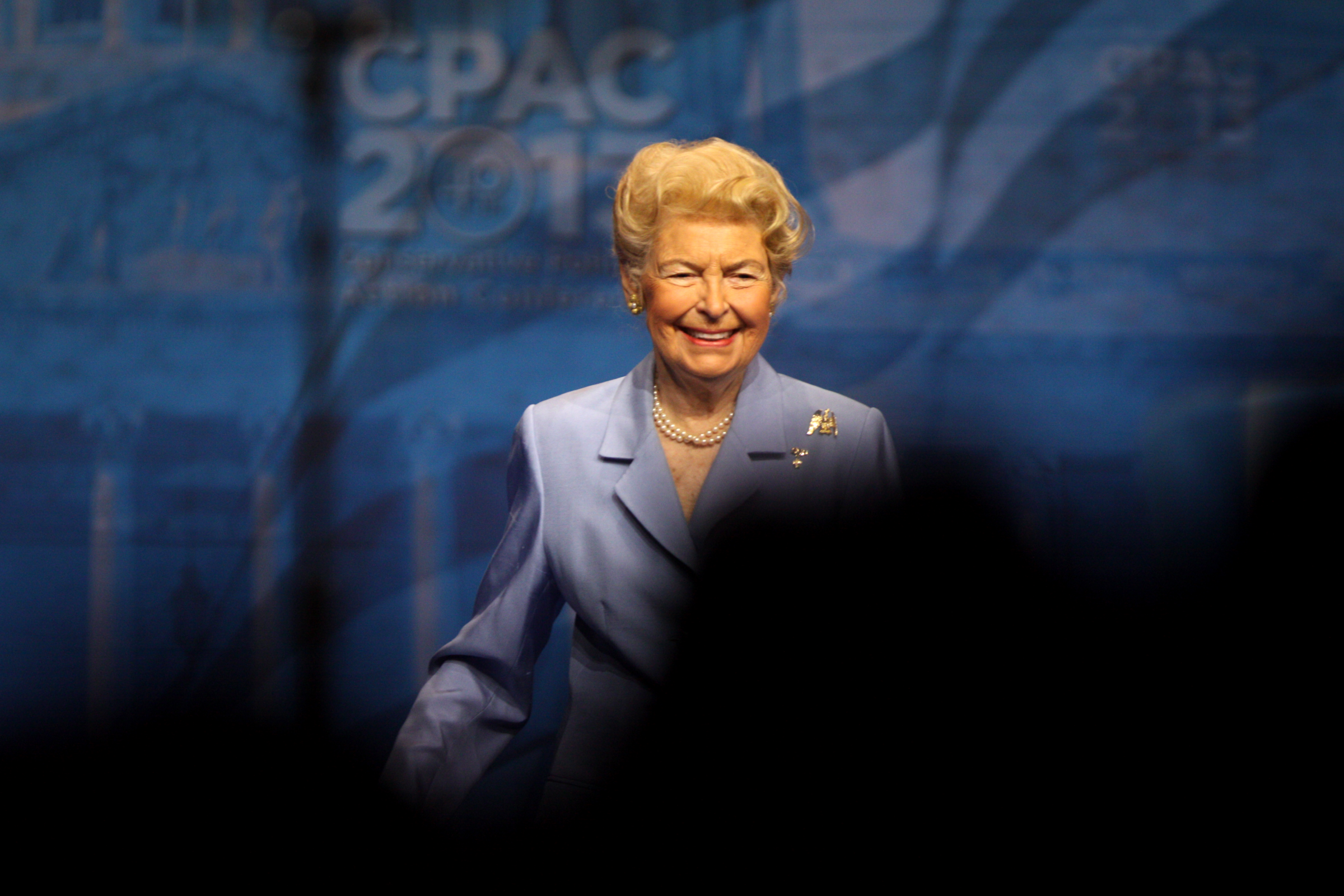 On September 5, 2016, Phyllis Schlafly died at the age of 92. The next day, Phyllis’s two final works were published: The Conservative Case for Trump (a New York Timesbestselling book) and the Phyllis Schlafly weekly column which compared Donald Trump’s visit to Mexico with Reagan’s to Geneva.

That Phyllis was writing up until her death comes as no surprise to those who knew her and the special place the written word had in her heart.

Over her long career, Phyllis wrote twenty-seven books and thousands of weekly columns which ran in nearly every major newspaper in America.

She wrote and voiced over 8000 three-minute radio commentaries and, of course, hundreds of thousands of letters and emails.

Not only was her writing prolific, but it was powerful.

Quite simply, her writing changed the world. Most famously, her self-published book A Choice Not An Echo galvanized the nascent conservative movement behind Goldwater, then Nixon, and best of all Reagan.

Her daily journal entries go back to 1945 and chronicle her life in politics from Sen. Taft to President Trump. All of her writing is now housed in the Phyllis Schlafly Center’s archives in St. Louis, Missouri and is visited by researchers and historians regularly.

How did Phyllis Schlafly’s life of writing begin? 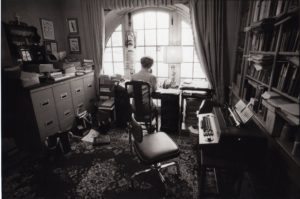 It can be traced back to a teacher that the teenage Phyllis Stewart had in St. Louis. In an oral history at the Presidential Library of Abraham Lincoln in Springfield, Illinois, Phyllis fondly recalled her middle school teacher assigning her to write a paragraph every day for the whole year.

She met the challenge with vigor, and never stopped writing from that day forward.

Phyllis also took pains to tell her Eagles she was NOT a natural born leader or writer. As a young woman, she was shy enough that public speaking and writing did not come easily. But through hard work, she got better and better.

Later in life, she liked to say she had “more facts with fewer words” than any writer ever!

Starting in the 1940s, Phyllis and her husband Fred, himself an accomplished lawyer and leading member of the then-conservative American Bar Association (ABA), focused on the threat of Communism.

Fred, with Phyllis’ help, wrote an important ABA report on the subject.

Phyllis started book clubs and focused on reading and summarizing the Congressional reports of the time.

From this began the Cardinal Mindszenty Foundation, one of the earliest anti-Communist education organizations.

Phyllis also began attending Republican events and conventions, from which she learned to hone in on the importance of words in a political party platform. Decades later, Phyllis would lead a band of pro-life warriors who would add the pro-life plank to the Republican Party where it remains to this day.

For the many Americans who knew Phyllis as a dynamic national leader – so telegenic, poised and composed – they might not realize how her lifelong commitment to writing was central to her success. She was, after all, a founder of the conservative movement and a true pioneer of political organizing.

After A Choice Not An Echo, Phyllis built a coalition of conservatives – the pro-family movement to beat the ERA (Equal Rights Amendment) – which included the ground-breaking cooperation of Protestants, Jews, Mormon and Catholics. This became a model for the Moral Majority and the Christian Coalition which permanently transformed American electoral politics.

As Phyllis spent decades founding the conservative movement and then the pro-family movement, a newsletter called the Phyllis Schlafly Report was published each month. I can clearly recall visiting with former Attorney General John Ashcroft and his son now Missouri Secretary of State Jay Ashcroft.

They fondly recalled to me how Jay’s mother Janet Ashcroft – an accomplished writer and teacher in her own right – made sure to read the Phyllis Schlafly Report every month. So it was for thousands and thousands of American conservatives in all corners of our great land.

Phyllis Schlafly knew true conservatism sprang from a love of words on paper.

That love is what shaped our United States Constitution and gives it power. Phyllis expressed her own love for the Constitution by serving on the Commission on the Bicentennial of the United States Constitution, a position to which she was appointed by President Ronald Reagan. She knew that at the heart of America’s greatness is the innermost values held common by the American people, and that these values are codified in our miraculous founding documents.

Phyllis was active in American politics on every level from the 1940s through 2016. She attended every Republican National Convention from 1952 through 2016. She believed that the 2016 election was a last hope for America. 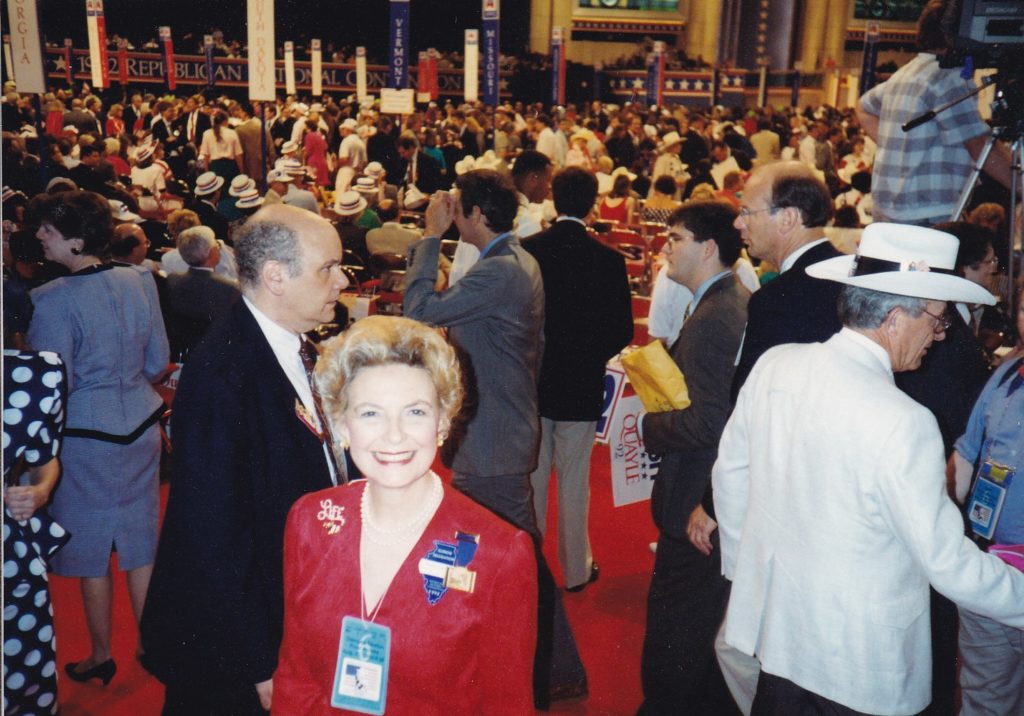 I was with her on March 11, 2016 in a small costume dressing room adjacent to the stage where Phyllis Schlafly handed Donald Trump her copy of the 2012 Republican Party platform. Phyllis asked Mr. Trump to help her keep the platform conservative in the upcoming 2016 convention in Cleveland.

Trump agreed, and so it was.

Besides The Conservative Case for Trump, Phyllis wrote about Donald Trump over 30 times during the 2016 election cycle.  (She also wrote glowingly of Donald Trump in 2011 for standing up to the Chinese!)

On September 10, 2016, Donald and Melania Trump took a day off from the campaign trail to attend the Phyllis’s funeral in St. Louis. Trump uttered words that serves a mantra for those of us who continue her work: “She Never Wavered.”

As Human Events relaunches, I believe Phyllis would be excited about the leadership this rejuvenated publication is showing encouraging good writing, thoughtful writing, and serious writing that explains and appreciates America’s greatness.

By her son’s estimation, Phyllis Schlafly had written more than four times as much as Shakespeare. I’m not one to compare her accomplishment to Shakespeare, but for Americans she may in fact be our greatest writer.

What You Need to Know is we are in a proxy war with Russia. Until now, we’ve been able to at least try to say we have given Ukraine defense weapons … END_OF_DOCUMENT_TOKEN_TO_BE_REPLACED

What You Need to Know is a lesson on documents and double standards. Suddenly everyone has classified documents and everyone is spinning the stories … END_OF_DOCUMENT_TOKEN_TO_BE_REPLACED

What You Need to Know is to thank the Freedom 20 who took up the House Speaker fight last week. Get the list here — it only takes 3-5 minutes … END_OF_DOCUMENT_TOKEN_TO_BE_REPLACED

Phyllis Schlafly Eagles · #WYNK: Documents and Double Standards | January 24, 2023 #ProAmericaReport The following is a transcript from the Pro … END_OF_DOCUMENT_TOKEN_TO_BE_REPLACED

What You Need to Know is Mom first! Life begins at conception. But what if the pro-life movement reframed the battle. What if we advertised that life … END_OF_DOCUMENT_TOKEN_TO_BE_REPLACED