Most people will tell you that you should not blame the messenger, but Donald Trump is quickly proving that adage to be false in one very important case. The messengers known as the mainstream media have certainly done a lot to deserve the blame they are receiving. While claiming impartiality, they have blatantly twisted or ignored the facts to suit their own liberal agenda. That is why Phyllis Schlafly called them the “Opinion-Makers” in her June 1982 Phyllis Schlafly Report. Armed with timely statistics and fearless facts, she called out the media for their mistreatment of President Reagan and urged the American people to focus on the real issues affecting their lives. Similarly, President Trump seized on the issue of media bias in his successful campaign, proving that “fake news” is not going away anytime soon.

The first item on the docket for the June 1982 Report was establishing that the media were in fact biased. For many readers of the Phyllis Schlafly Report, this was not a difficult claim to believe. In fact, many people have read the Phyllis Schlafly Report, particularly during the pre-internet era, to hear from one of the few alternatives to the spin dished out by mainstream media sources. Using an in-depth poll from Public Opinion magazine, Phyllis revealed that 94% of the media elite voted for Johnson over Goldwater in the 1964 presidential race. The succeeding figures for 1968 through 1976 were similarly stark in contrast. Not only were they shown to be liberal in presidential choices, but they were exposed as non-religious and favoring immoral practices as well. Media elites were clearly nowhere near a fair representation of the traditional values held by the majority of American people.

The same saddening statement could be made today, which is why President Trump so successfully tapped into the American people’s contempt for this blatant indoctrination. A recent Quinnipiac poll confirms this contempt by showing that 59% of Americans are angry or dissatisfied with how the news media has been covering American politics. If well over half of Americans do not trust these supposedly unbiased reporters, it is imperative for conservatives to find a way to get our message out in spite of the media. The December 27, 2016 Phyllis Schlafly Report Column by John and Andy Schlafly delved deeply into this topic by comparing Trump and Reagan’s communicative mediums of choice. In the age before the internet, President Reagan “was called the ‘Great Communicator’ because he effectively used television to connect directly with voters.” Today, President Trump taps into that same style by communicating directly with the American people on Twitter. The June 7, 2017 Column defended Trump for this by saying “The idea that President Trump shouldn’t speak directly to the American people . . . shows how far the political power structure has strayed from its constitutional moorings.” Trump’s famous (or infamous to some) Twitter feed is a vital part of the message he conveys from the White House.

Ultimately, the June 1982 Phyllis Schlafly Report exposed the “tremendous gap between the beliefs of the people and of the leaders and opinion-makers who run our country.” Especially in a Republican administration, conservatives should expect the biased media to distract and detract from the real issues. Whether those real issues are as controversial as an Obamacare solution or as non-controversial as a much-needed overhaul of our infrastructure system, the news media will stop at nothing to derail Trump’s efforts to make America great again. Instead of covering stories of legitimate import, the media tries to distract us with Russia probes, leaks from seldom-reputable “anonymous sources,” and petty scandals. Conservatives should not fall for these diversionary tactics. If we want to rise above the swampy liberal media who want to bog down our progress, we must stop playing their game and focus on those issues that are truly battles to promote time-tested conservative principles. Phyllis Schlafly exposed the liberal bias of the media in 1982, but the same fight continues today. To win the war for American greatness, conservatives must follow the footsteps of Phyllis and cut through the ever-present fake news to get to the issues worth fighting for.

To view the June 1982 Phyllis Schlafly Report in its entirety, please click on the image below. 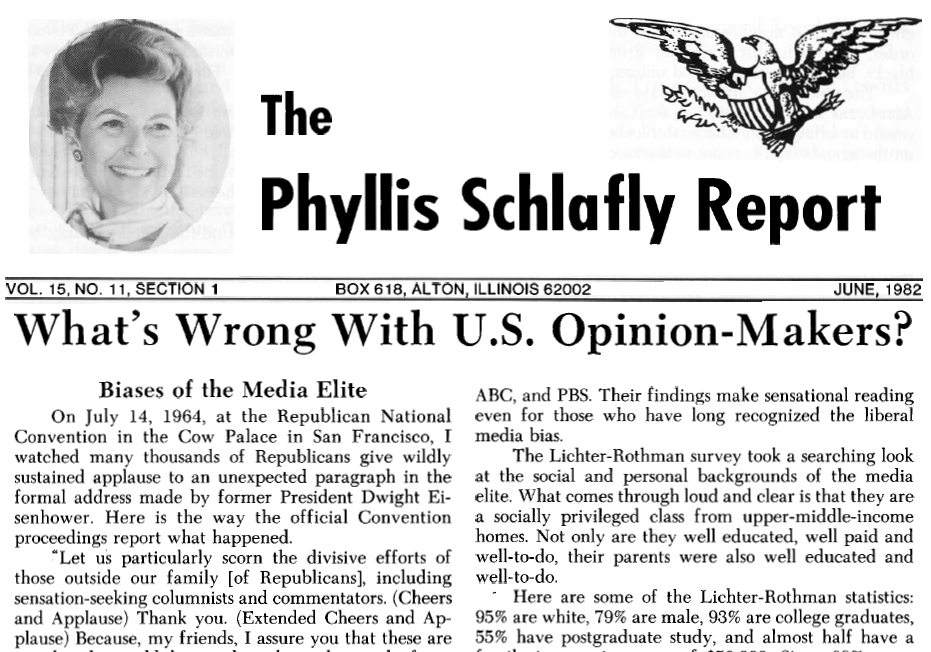 What You Need to Know is Democrats’ plan to slow down GOP investigations. David Brock (of Media Matters) released a memo detailing a group that will … END_OF_DOCUMENT_TOKEN_TO_BE_REPLACED

Elon Musk has 119 million followers on Twitter, the platform which he just bought for $44 billion. That’s more followers than Taylor Swift, whose … END_OF_DOCUMENT_TOKEN_TO_BE_REPLACED

What You Need to Know is why Trump is not an echo of other candidates before him. Phyllis Schlafly famously first used that phrase — a choice, … END_OF_DOCUMENT_TOKEN_TO_BE_REPLACED

What You Need to Know is why Trump is not an echo of other candidates before him. Phyllis Schlafly famously first used that phrase — a choice, not an … END_OF_DOCUMENT_TOKEN_TO_BE_REPLACED

What You Need to Know is Fauci retires from the Covid Industrial Complex! He’s sneaking out under the cover of Thanksgiving and a no-news week. He … END_OF_DOCUMENT_TOKEN_TO_BE_REPLACED

Phyllis Schlafly Eagles · December 2 | The Past, Present, and Future of the War on Christmas Haul out the holly and bring out the boxing gloves. … END_OF_DOCUMENT_TOKEN_TO_BE_REPLACED

Phyllis Schlafly Eagles · December 1 | We Need More Badges Herschel Walker had an iconic moment in a debate with Sen. Raphael Warnock when he … END_OF_DOCUMENT_TOKEN_TO_BE_REPLACED