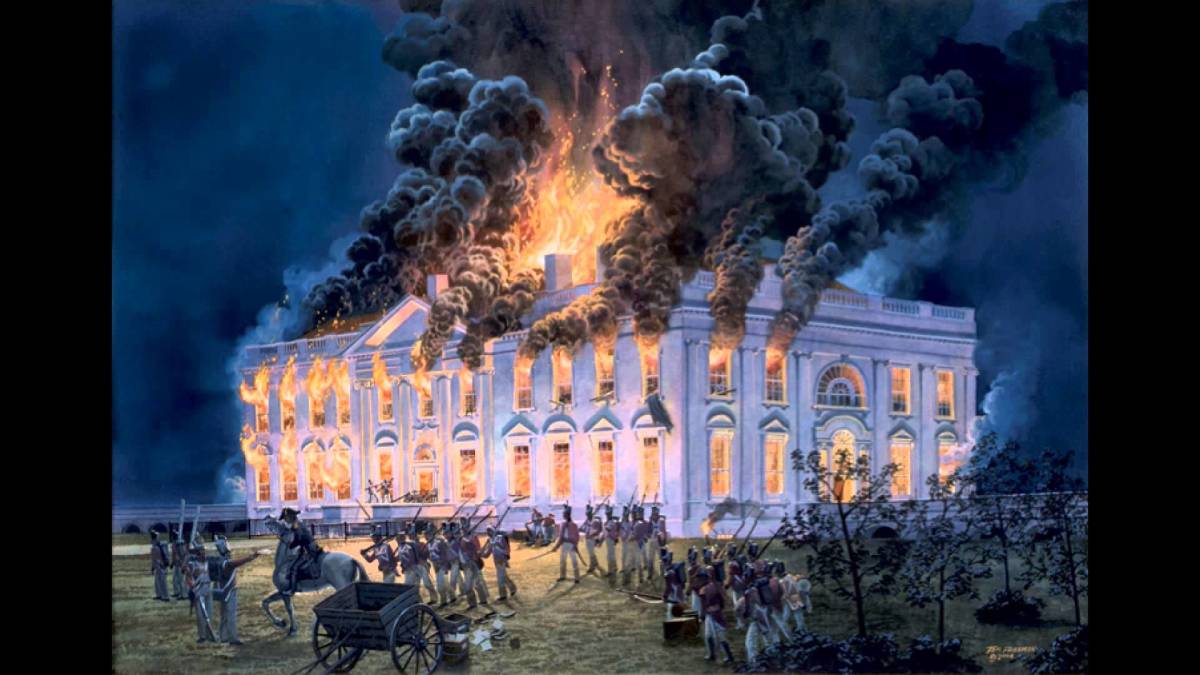 Most school and college history courses don’t teach much about our War of 1812, so let me tell you that today is the 197th anniversary of the day God saved America in that war. Remember, Britain was then the world’s superpower, and the United States was just a little nation trying to get on our feet.

The British warships sailed into Chesapeake Bay on August 19, 1814 and marched toward Washington, DC. On August 24, the two armies met along the banks of the Potomac River. The temperature was 100 degrees. Britain had the world’s best trained soldiers and they quickly routed the Americans, who were just a bunch of untrained volunteers. The British admiral ate dinner in the White House and then gave the order to set fire to the city. Within hours, the White House, the U.S. Capitol, many other public buildings, the dockyard, and several large storehouses filled with cannon, small arms, and other weapons were burning. On the morning of August 25, the British soldiers continued to set fires, determined to destroy the city.

On the afternoon of August 25, the heart of Washington was hit with a devastating tornado that collapsed buildings and lifted them off the ground, blew off roofs, uprooted trees, destroyed the bridge across the Potomac, threw the British cannon into the air, and killed British soldiers. That was followed by a soaking rain lasting two hours that put out most of the fires in the city. The British soldiers were forced to withdraw, and found that their warships were badly damaged.

Washington DC is not usually a target of tornadoes; only seven tornadoes have hit Washington since 1814 and they didn’t do much damage. The Americans at time believed that America was saved from having to surrender to the British on August 25, 1814 by an amazing act of Divine intervention.

What You Need to Know is we are in a proxy war with Russia. Until now, we’ve been able to at least try to say we have given Ukraine defense weapons … END_OF_DOCUMENT_TOKEN_TO_BE_REPLACED

What You Need to Know is a lesson on documents and double standards. Suddenly everyone has classified documents and everyone is spinning the stories … END_OF_DOCUMENT_TOKEN_TO_BE_REPLACED

What You Need to Know is to thank the Freedom 20 who took up the House Speaker fight last week. Get the list here — it only takes 3-5 minutes … END_OF_DOCUMENT_TOKEN_TO_BE_REPLACED

Phyllis Schlafly Eagles · February 3 | "Woman" Is the Word of the Year The internet is a powerful tool that most of us use every day. … END_OF_DOCUMENT_TOKEN_TO_BE_REPLACED

What You Need to Know is Tucker is allowing the will of the people to be heard! When a huge block of Republicans and so-called conservatives are … END_OF_DOCUMENT_TOKEN_TO_BE_REPLACED