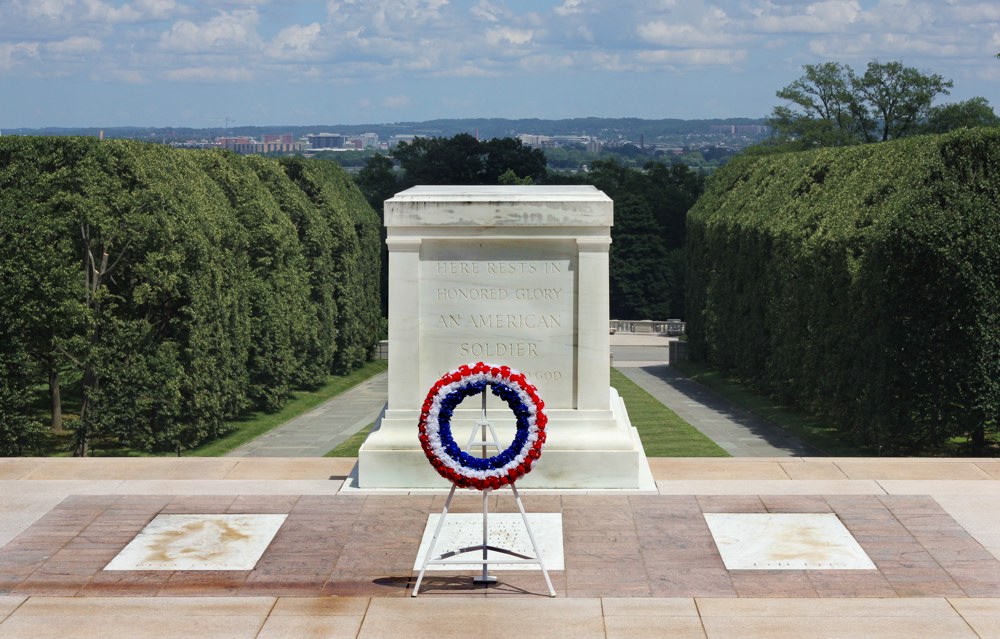 Today is Veterans Day, a day when we honor the men who have served our country and to thank them for their service and sacrifice to defend us. This holiday was originally known as Armistice Day, was established to remember the 1918 signing of the Armistice Treaty and to honor the heroes of World War I. 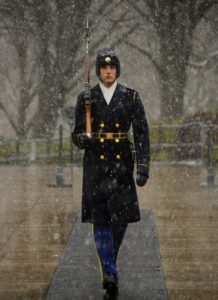 This tomb has been guarded around the clock by dedicated servicemen and women since 1948.

In 1921, Congress ordered the building a tomb to honor the men who had given their lives. One unknown American soldier was chosen to be buried in the tomb. When the Navy ship Olympia arrived in Washington with the body of that fallen soldier, America responded. The Band played “Onward Christian Soldiers” as the casket was taken to the U.S. Capitol, where the soldier was laid in state. President Warren G. Harding, other government officials, and thousands of Americans paid their respects to this fallen soldier. On the morning on November 11, this soldier was given a military procession to Arlington National Cemetery and buried at in what is known today as the Tomb of the Unknown Soldier. This tomb has been guarded around the clock by dedicated servicemen and women since 1948. The honor for the sacrifice of this soldier was evident once again when the guards refused to leave their post during Hurricane Sandy.

In 1954 the day was officially renamed Veterans Day by President Dwight Eisenhower to honor American veterans of all our wars. These brave men who are willing to sacrifice their lives for our freedom should be celebrated. So, on this special day when we pause to reflect on the sacrifices made by men and women willing to lay down their lives to protect and defend our Constitution, our freedoms, and our way of life, let us be proactive and prayerful in showing our gratitude.

What You Need to Know is what’s wrong with the Deep State! I don’t think we’ve seen anything like what could happen when people like Andrew Weissmann … END_OF_DOCUMENT_TOKEN_TO_BE_REPLACED

Fifty-one years ago today, the Apollo 11 lunar mission achieved liftoff from the Kennedy Space Center in Cape Canaveral, Florida. That was certainly a … END_OF_DOCUMENT_TOKEN_TO_BE_REPLACED

* Previously Recorded by Phyllis Schlafly // June 2010 * In a world of growing threats to freedom and our U.S. Constitution, America's very … END_OF_DOCUMENT_TOKEN_TO_BE_REPLACED

What You Need To Know is today is Constitution Day! President Trump gave an extraordinary 20 minute speech talking about the history of the country, … END_OF_DOCUMENT_TOKEN_TO_BE_REPLACED

Phyllis Schlafly Eagles · September 29 | The Great Racism Witch Hunts 2020 is sure to be remembered for a lot of things. Our great grandchildren … END_OF_DOCUMENT_TOKEN_TO_BE_REPLACED

What You Need To Know is Amy Coney Barrett is incredibly accomplished! Trump nominated her last weekend for the SCOTUS because of how bright, … END_OF_DOCUMENT_TOKEN_TO_BE_REPLACED