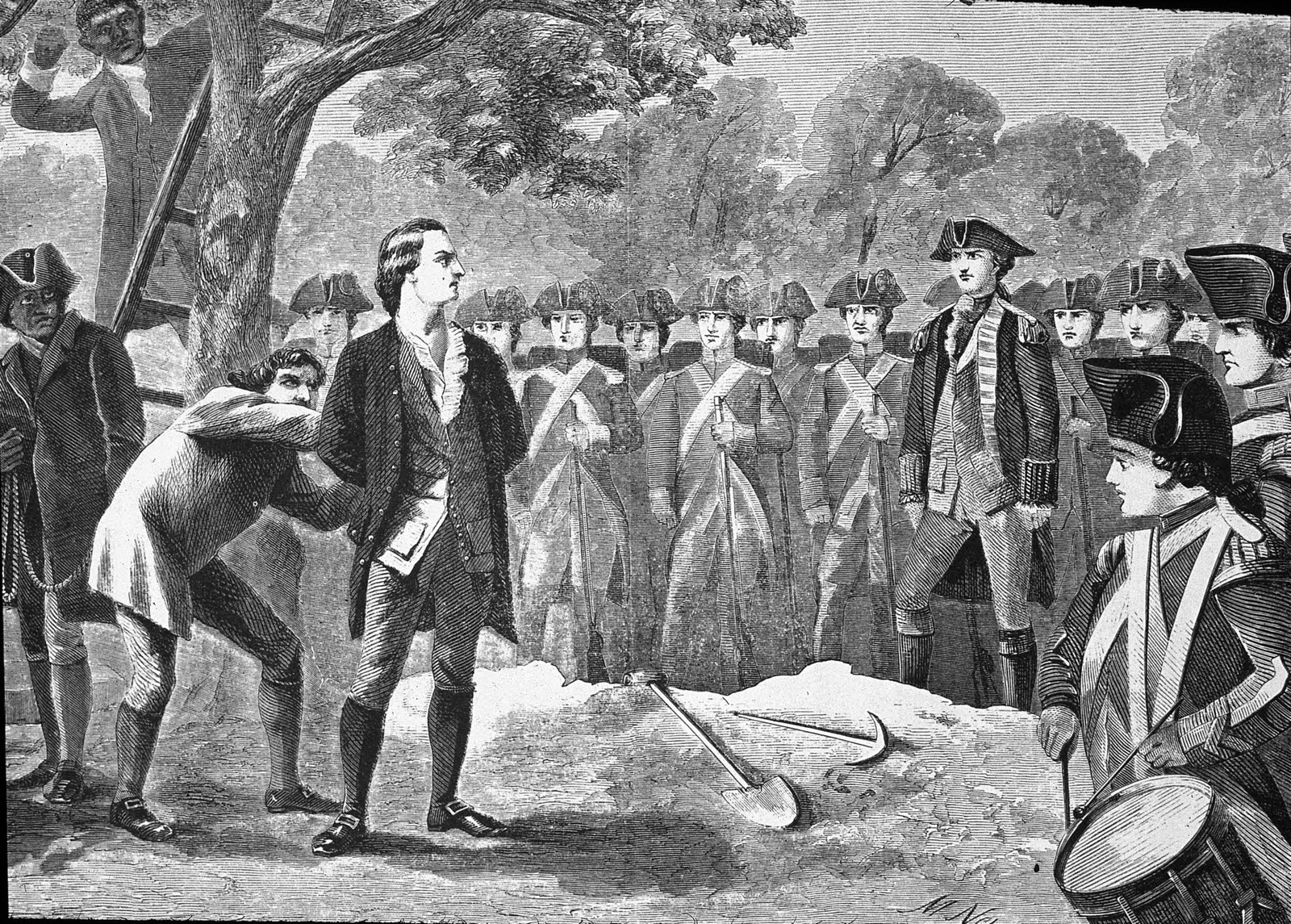 Tomorrow is the anniversary of some of the most famous words in American history. It was on September 22, 1776 that a 21-year-old  man named Nathan Hale was hanged by the British and uttered the great words, “I only regret that I have but one life to lose for my country.”

Nathan Hale graduated from Yale with first-class honors at age 18. He was a teacher in a local grammar school who volunteered to serve in George Washington’s Army.  In 1776, Washington  called for a brave volunteer to take on the mission of going as a spy behind enemy lines to find out the location of the anticipated attack by the British. This was such a dangerous mission that Nathan Hale was the only one who volunteered.  He volunteered to penetrate the British line at Long Island, and left on his  mission on September  8, 1776.  Hale was captured  by the British on his return to the American forces. The very next morning, without any trial, Nathan Hale was hanged from an apple tree in an orchard near what are now the streets of East Broadway and Market in New York City. No one knows where his body was buried.

A life-size statue of Nathan Hale stands at Yale University and at least a half dozen copies of that statue are in other prominent places, particularly and most appropriately at the CIA headquarters, and also in front of the Chicago  Tribune  building in Chicago.  Nathan  Hale’s great-nephew, the well-known author Edward Everett Hale, later wrote: “We are God’s children, you and I, and we have our duties…. Thank God I come from men who are not afraid in battle.” Every schoolchild should know the name and famous words of Nathan Hale because he is the kind of man who won our independence for us.

What You Need to Know is we are in a proxy war with Russia. Until now, we’ve been able to at least try to say we have given Ukraine defense weapons … END_OF_DOCUMENT_TOKEN_TO_BE_REPLACED

What You Need to Know is a lesson on documents and double standards. Suddenly everyone has classified documents and everyone is spinning the stories … END_OF_DOCUMENT_TOKEN_TO_BE_REPLACED

What You Need to Know is to thank the Freedom 20 who took up the House Speaker fight last week. Get the list here — it only takes 3-5 minutes … END_OF_DOCUMENT_TOKEN_TO_BE_REPLACED

Phyllis Schlafly Eagles · February 3 | "Woman" Is the Word of the Year The internet is a powerful tool that most of us use every day. … END_OF_DOCUMENT_TOKEN_TO_BE_REPLACED

What You Need to Know is Tucker is allowing the will of the people to be heard! When a huge block of Republicans and so-called conservatives are … END_OF_DOCUMENT_TOKEN_TO_BE_REPLACED