People all over our nation and beyond have contracted debilitating cases of a new illness called TDS. No, this is not a global outbreak of some new virus, although it seems to have people just as panicked. I am talking about Trump Derangement Syndrome. From attacking strangers in MAGA hats to climbing up the Statue of Liberty, Trump Derangement Syndrome is bringing out the craziness of the Left. The more President Trump wins, the crazier their symptoms get. 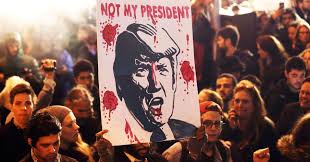 On Independence Day, most rational Americans choose to spend their holiday celebrating with their families. However, that is not what Therese Okoumou decided to do. She and some friends with a protest group called “Rise and Resist” decided to go to the Statue of Liberty and protest against the president. Therese then decided that she was going to climb up the base of the statue and refused to come down. Not only was this a federal crime, but it forced the statue to completely close down and the island to be evacuated on one of their busiest days of the year. That is a classic case of Trump Derangement Syndrome.

Another person suffering greatly from this illness is a woman named Brigid Delaney. Delaney publishes columns for The Guardian. In one of her columns, she claims that Donald Trump has made her too weak to open a jar of pickles. Allegedly, she did not like the fact that the gym she frequented was owned by Trump supporters, so she swore off working out for the whole time Trump is in office. She attributes this peculiar protest to the fact that she can no longer lift bags of groceries or open stubborn jars. Of course, she blames Trump. Really, it is a very sad case of TDS.

The Left just doesn’t get it. They will do anything and say anything to make Trump look bad, no matter how crazy it sounds to normal people. Conservatives should take heart in knowing that while we are making the economy soar and unemployment plummet, the Left can’t even open a jar of pickles.

Phyllis Schlafly Eagles · #WYNK: Who Is Congressman Troy Nehls? | September 28, 2022 #ProAmericaReport The following is a transcript from the Pro … END_OF_DOCUMENT_TOKEN_TO_BE_REPLACED

What You Need to Know is The Narrative Machine is Obsessed with Trump! First, it used to be called the Trump Exhaustion Syndrome now the left is … END_OF_DOCUMENT_TOKEN_TO_BE_REPLACED