The stakes of the 1980 presidential election could not have been higher. Without a doubt, the two parties stood in stark contrast with incumbent president Jimmy Carter for the Democrats and popular California Governor Ronald Reagan for the Republicans. President Carter shamelessly used his power as an incumbent president to sway the election. In contrast, Ronald Reagan relied on the grassroots efforts of patriots like Phyllis Schlafly to champion his cause. The result of this “choice, not an echo” is viewed historically as the great culmination of the conservative movement, which was started by Phyllis’s book A Choice, Not an Echo in 1964. While times may have changed, most of the principles Phyllis wrote about in the October 1980 Phyllis Schlafly Report to mobilize conservatives for Reagan are as useful today as they ever have been. Let’s take a look at this monumental article and find out from the Sweetheart of the Silent Majority herself how any American can make a difference.

Phyllis Schlafly was an idealist in the sense that she held to a clear set of principles which she would not surrender for money or popularity. However, she was not an idealist in the sense that she would only support the “perfect candidate.” In fact, she readily acknowledged that there is no such thing. Knowing that God is the only one capable of perfection, she was fond of pointing out that “Jesus is not on the ballot.” With that being said, she advised conservatives to start their influence of election politics by choosing which issues are most important to them. By choosing the candidate who most closely aligns with your most core political issues, you can make the biggest possible meaningful change in your sphere of influence.

Before jumping in a campaign, you must also learn about the election process. As Phyllis said, “Knowing how the election process functions, how campaigns are won, and who the candidates are is the power to make the policies you want on the issues you care about.” With the advent of the internet, it is easier than ever to get the knowledge you need to campaign effectively. That also means it is more crucial than ever to have a battle strategy before you charge into the fray. Even the most energetic patriot cannot make substantial change without an understanding of the process to channel his energy in the right direction.

One of the most striking statements in the October 1980 Phyllis Schlafly Report is Phyllis’s call for campaign workers to show tolerance. While most conservatives see tolerance as little more than a liberal buzzword for pointless name-calling, some conservatives really would do well to learn the value of political tolerance. Phyllis put it this way: “You must be tolerant enough to allow voters to vote for your candidate for the reasons of their choice.” As humans, we have a tendency to want to try to get everyone around us to agree with us on everything. For good or ill, that is simply a part of human nature. However, Phyllis Schlafly recognized that people with diverse beliefs can still come together to achieve great things on issues where they can find common ground. That mentality is what enabled her to build a grassroots organization out of Catholics, Evangelicals, Mormons, and more. Similarly, Phyllis urged conservatives who want to make a difference to find a rallying point that other conservatives of diverse backgrounds can claim. Ultimately, the important thing is to win the race and get the right person into office.

Phyllis Schlafly was more than just a grassroots activist; she was a grassroots organizer. She had the uncanny ability of unlocking potential within passionate men and women who wanted to make real change. By writing articles like the October 1980 Phyllis Schlafly Report, she ushered in a generation of conservative activists who brought the conservative movement to fruition in the form of President Ronald Reagan. Phyllis Schlafly’s proven path to political success has not changed. The foundation of political victory is still hard work and involvement tempered by practical knowledge and discernment. Now is the time to become strong leaders for conservatism and enable those around us to do the same. Phyllis left us the tools we need. It is up to us to use them as we continue her fight.

To view the October 1980 Phyllis Schlafly Report in its entirety, please click on the image below. 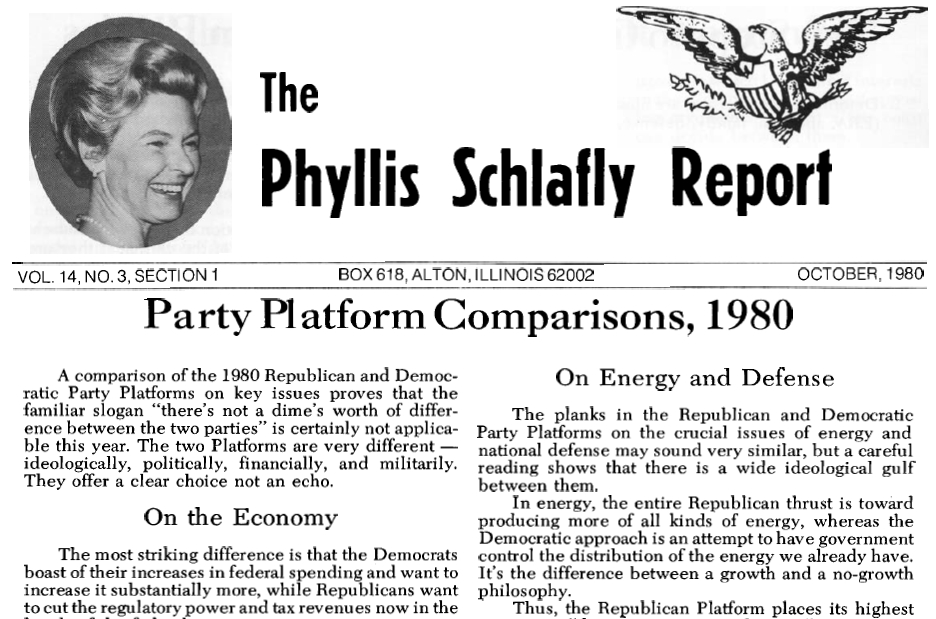 Phyllis Schlafly Eagles · January 14 | Nobody Likes Injustice Nobody likes to see injustice in America. Unlike in other nations where corruption is … END_OF_DOCUMENT_TOKEN_TO_BE_REPLACED

What You Need to Know about Joy! As we approach the Christmas season there is no better topic than joy. Barry Shore, the Ambassador of Joy, talks … END_OF_DOCUMENT_TOKEN_TO_BE_REPLACED

If the education establishment wants to know why public schools don't get much respect from our citizenry, they need look no further … END_OF_DOCUMENT_TOKEN_TO_BE_REPLACED

Robert Strange McNamara belongs on the daytime soap operas. Better yet, his histrionics belong on Donahue or Geraldo or Sally Jesse Raphael. We are … END_OF_DOCUMENT_TOKEN_TO_BE_REPLACED