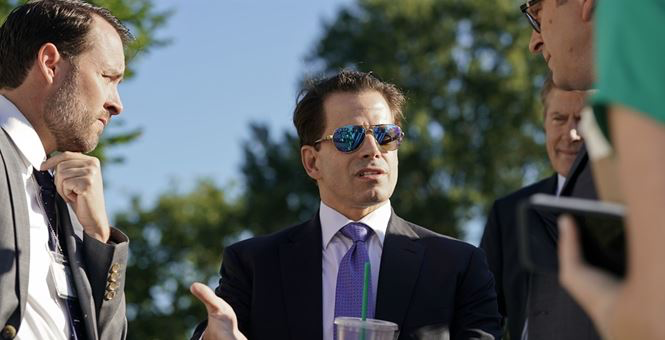 “The Mooch,” as everyone calls President Trump’s new communications director Anthony Scaramucci, is a brilliant hire by Trump to reassert his authority in a fractious White House. In merely a few days, the charismatic but tough-talking Scaramucci has already impressed so much that there are calls for him to become Trump’s new chief of staff.

Scaramucci has shown that he’s ready, willing and able to enforce a new loyalty to the Trump agenda among Republicans both inside and outside the White House. Too many Republicans have been guilty of aiding and abetting the “fake news” industry (formerly known as the “mainstream media”) in its relentless campaign to bring down our president.

As Trump tweeted on Sunday, “It’s very sad that Republicans, even some that were carried over the line on my back, do very little to protect their President.” This is the result of some in the GOP taking advantage of Trump’s hospitality, and not being told by staff that there will be political consequences for disloyalty.

After Trump won the election last November, the Republican Establishment claimed more credit than it deserved and installed several GOP insiders in key positions in the White House. Reportedly those hires were demanded by Congress on the pretext that they would help to enact Trump’s agenda into law.

Now, after completing the most important six months of President Trump’s first term, we can see that Trump’s appeasement of Capitol Hill has resulted in a pitiful lack of achievement by Congress, and worse. The same senators who have failed to do their own jobs are working overtime to conduct a witch-hunt on behalf of the liberal media against Trump and members of his family.

On Monday, the Senate orchestrated a closed-door hearing to interrogate Jared Kushner, Trump’s highly capable son-in-law, about his exercise of his constitutional rights as a private citizen during the Trump campaign. The Senate would never have held such a hearing if Hillary Clinton had won, and it is an outrage that the Republican leaders allowed it to happen.

The Senate’s unjustified investigation of the president’s own family, including son Donald Trump Jr., who is not a government official, suggests a failure by Republicans around the president to fully defend him. One might say that the first obligation of all advisers to and appointees of a president is to protect him and his family against his political enemies.

Some senators have been deluded into thinking they are equal in stature to the president, and free to walk all over his family. Earlier this year they apparently persuaded Trump to adopt a strategy of cooperation with the Republican leadership in the Senate, supposedly in order to enact his agenda.

That approach has gotten our country nowhere, as the Senate wastes its time holding hearings to question Trump’s immediate family. Scaramucci and other appointees should bring a new approach to the White House that rejects appeasement of the GOP Establishment in D.C.

Some senators, such as the obscure Ben Sasse from Nebraska, have openly mocked Trump, despite their own constituents’ overwhelming support of our president. Other senators, such as Lindsey Graham of South Carolina, still seem to hold a grudge for how Trump trounced him in the presidential primaries.

One Republican senator explained the Senate’s dismal performance by saying, “Look, I didn’t expect Donald Trump to win, I think most of my colleagues didn’t, so we didn’t expect to be in this situation.” Pat Toomey thereby proved himself clueless about the voters in his own state of Pennsylvania, which was pivotal to Trump’s victory.

It is time to unleash The Mooch, Anthony Scaramucci, to remind senators of whom the American people put in charge, and start to hold them accountable for how much they have let our country down. The failure of Senate Majority Leader Mitch McConnell to pass or rescind any major legislation in the first six months of this new Republican Administration, but to allow the witch-hunt against Trump’s family, is a disgrace.

Scaramucci’s inaugural press conference last Friday was a breath of fresh air. Gesticulating with his hands in perfect harmony with his remarks, he mesmerized even Trump’s toughest critics, while making clear that he is ready to shake things up.

Sarah Huckabee Sanders, who has already proven her mettle amid hostile questioning, will take over the role of press secretary. That gives Scaramucci more time to put his New York City style to good use in exposing or driving out disloyalists, both at the White House and at the other end of Pennsylvania Avenue.

Too many Republicans have demonstrated that they are more interested in following “fake news” down the proverbial rabbit hole than in making America great again. The Mooch should signal that the President will no longer defer to Republican leadership in Congress, but will instead go directly to the American people to move the agenda they voted for.

Proving once again that he is in touch with ordinary Americans, Donald Trump selected education for the first video message of his 2024 presidential … END_OF_DOCUMENT_TOKEN_TO_BE_REPLACED

Phyllis Schlafly Eagles · #WYNK: Trump's Record is Baked In | January 30, 2023 #ProAmericaReport The following is a transcript from the Pro … END_OF_DOCUMENT_TOKEN_TO_BE_REPLACED

What You Need to Know is Trump’s record is baked in. He’s already been torn apart every which way and his record stands with all the things you like … END_OF_DOCUMENT_TOKEN_TO_BE_REPLACED

Phyllis Schlafly Eagles · February 3 | "Woman" Is the Word of the Year The internet is a powerful tool that most of us use every day. … END_OF_DOCUMENT_TOKEN_TO_BE_REPLACED

What You Need to Know is Tucker is allowing the will of the people to be heard! When a huge block of Republicans and so-called conservatives are … END_OF_DOCUMENT_TOKEN_TO_BE_REPLACED