Did you know that Congress once printed Bibles? At the time of the American Revolution, the British government had strict laws about printing Bibles. Only a few printers were licensed to do so, and none of them was in the American colonies, so all Bibles had to be imported from England. The Revolutionary War naturally interrupted trade with England, and there was a severe shortage of Bibles in America. 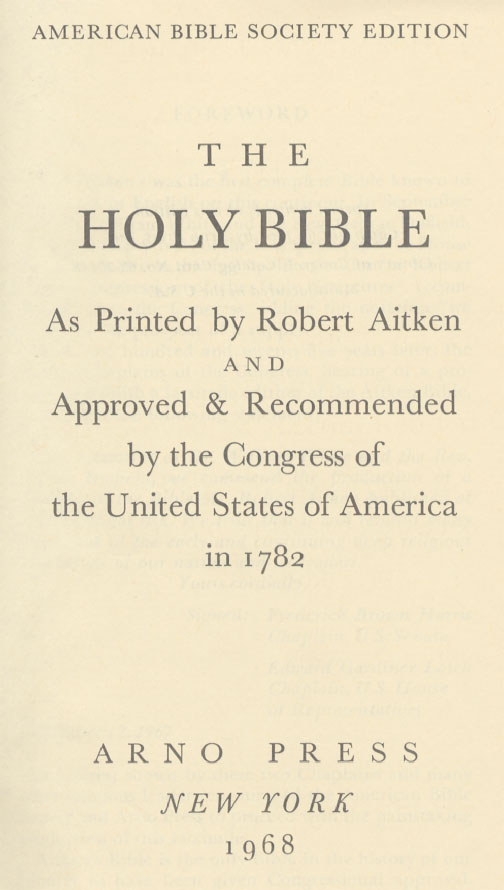 In 1777, U.S. clergy petitioned the Continental Congress to have Bibles printed in America. In response, Congress passed a resolution to import 20,000 Bibles from Holland, Scotland, and other countries, but in the chaos of the war, they never arrived. So three years later, another resolution to print Bibles in America was introduced in Congress, and printer Robert Aitken petitioned Congress for permission to print them. Congress granted him permission and financial support to print Bibles. His Bibles included an endorsement and recommendation from Congress on the first page.

More American versions of the Bible were printed soon after. In the United States, printers had the freedom to print the Scriptures freely without government approval. That was a radically different situation from what they had been used to under British rule, and it was a great victory for religious freedom.

We now live in a country where prayer and Bible readings in public schools have been outlawed by the Supreme Court for over fifty years. We’re told it’s a violation of the Constitution to display the Ten Commandments in a county courthouse or to have a nativity scene at city hall. But interestingly, the Continental Congress did not consider for a moment whether their appropriation for printing the Bible was an affront to religious freedom. They knew it wasn’t. When we look at changes in America, we should be concerned about our loss of religious liberty.

Phyllis Schlafly Eagles · January 14 | Nobody Likes Injustice Nobody likes to see injustice in America. Unlike in other nations where corruption is … END_OF_DOCUMENT_TOKEN_TO_BE_REPLACED

If the education establishment wants to know why public schools don't get much respect from our citizenry, they need look no further … END_OF_DOCUMENT_TOKEN_TO_BE_REPLACED

Robert Strange McNamara belongs on the daytime soap operas. Better yet, his histrionics belong on Donahue or Geraldo or Sally Jesse Raphael. We are … END_OF_DOCUMENT_TOKEN_TO_BE_REPLACED

Phyllis Schlafly Eagles · January 26 | The Xi Variant No one should be surprised that new variations of the Covid-19 virus are emerging. That would … END_OF_DOCUMENT_TOKEN_TO_BE_REPLACED

Thousands of Americans gathered on the national mall Sunday for the “Defeat the Mandates” rally led by Robert F. Kennedy Jr., whose new book, The Real … END_OF_DOCUMENT_TOKEN_TO_BE_REPLACED