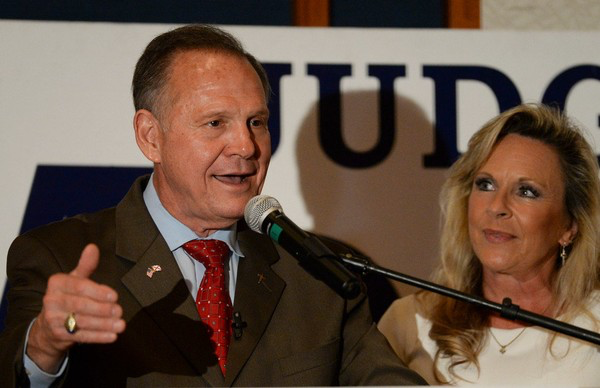 Personal scandals by Bill Clinton, Ted Kennedy, and Barney Frank are just fine with the liberal media, who endorsed them for election and re-election. Ted Kennedy was celebrated as the Lion of the Democratic Party for 40 years despite having driven a young woman off the bridge at Chappaquiddick and abandoning her there to drown.

But woe to any conservative candidate, such as Roy Moore, who might have an imperfection in his distant past. Somehow that renders him unfit for elective office in D.C., according to the same people who supported Bill Clinton throughout the scandal concerning his conduct with Monica Lewinsky in the White House.

The double standard in American politics needs to stop if we are going to make America great again. Voters overcame the double standard by electing Donald Trump as president, despite the Billy Bush tapes and unproven allegations by women, and Roy Moore should do likewise in the upcoming Senate election in Alabama.

The criticism of Roy Moore is not about something that happened 5, 10, 20, or even 30 years ago. The accusations against Moore, which he has denied, relate to misdemeanors he supposedly committed in December 1977 and January 1979, nearly 40 years ago.

Marrying later in life has become the norm today, but for most of American history it was considered normal and even desirable for a young woman to marry, or at least become engaged, in her teenage years. Only in the last two decades has the median age of first marriage risen to 27 for females and 29 for males.

In 1977, the year Roy Moore supposedly flirted with a teenage waitress at the Olde Hickory House in Gadsden, Alabama, half of all young women in America were married by the age of 21. By her own account, as she read her tearful statement under the watchful eye of Gloria Allred, the now 56-year-old woman refused Roy Moore’s advances because she already had a boyfriend, thereby conceding that she wasn’t too young to have one.

In that same year of 1977, a prominent feminist lawyer named Ruth Bader Ginsburg wrote that the “age of consent” for sexual acts should be lowered to the age of 12. In her book entitled “Sex Bias in the U.S. Code,” the future Supreme Court Justice also called for repealing laws against statutory rape, bigamy, prostitution, and sex trafficking because they perpetuate a stereotype that such laws are needed to “protect weak women from bad men.”

Ginsburg has never disavowed her radical writings, so it is particularly hypocritical for feminists to criticize Roy Moore’s alleged dating of teenage girls as though there was anything improper about it. As usual the feminists want to have it both ways, as they sanctimoniously insist that Roy Moore quit the race for dating teenage girls when he was a 32-year-old bachelor.

Liberals and the Establishment hate Roy Moore for his conservative positions today, not what he allegedly did 40 years ago as an unmarried district attorney looking for a future wife. Judge Moore subsequently married his beautiful wife Kayla, who had been a runner-up for Miss Alabama, when she was 24 and he was 38.

If elected, Roy Moore would join a U.S. Senate in which one Democratic member, Bob Menendez, is on trial for allegedly accepting bribes, including the use of a private jet to Paris followed by three nights in a $1,500-a-night hotel room for Menendez and his girlfriend.

The same people who are calling on Roy Moore to step aside have failed to call on Menendez to resign for the many felonies of which he was charged.

The Establishment has insulted Alabama voters who have a right to decide the election for their Senate seat, not Senate Majority Leader Mitch McConnell and the rest of the D.C. swamp. McConnell staked his future on trying to defeat Roy Moore in the September primary, but Moore won by a landslide precisely because voters reject the same-old, accomplish-nothing politics of both parties in Washington.

We cannot make America great again if unproven allegations are allowed on the eve of elections to ambush only conservative candidates. Those who had any beef about something Roy Moore did nearly 40 years ago should have spoken up long before now, or forever held their peace as voters pick the best candidate for the future: Roy Moore.

What You Need to Know is the Narrative Machine is out of control. It’s truly stunning, the lengths they’ll go to to stop us from talking about … END_OF_DOCUMENT_TOKEN_TO_BE_REPLACED

What You Need to Know is Governor Andrew Cuomo is getting canceled by his own party! The left is willing to get rid of anyone they don’t need. A … END_OF_DOCUMENT_TOKEN_TO_BE_REPLACED

After 40 days offstage, Donald Trump returned to the national spotlight on Sunday, and not a moment too soon. His rip-roaring, 90-minute address to CPAC covered many familiar themes, building to a new conclusion that “one of the most urgent issues facing the Republican party is that of ensuring fair, honest, and secure elections.” Trump’s […]

What You Need to Know is to read Gen. Mike Flynn’s statement “America First: Election Integrity and Get Involved.” We must get to the bottom of what happened. Every singe day, the Narrative Machine is trying to get us to stop looking at and talking about what happened on November 3rd. The AP and others are […]

What You Need to Know is the Fake News Media needs Trump! They need a crisis to report on and recently the next best thing from beating on Trump is beating up on governors. Not much is being said about President Biden even though he is dramatically transforming our country and confirming some very radical […]

What You Need to Know is Texas is reopening! Governor Abbott has opened Texas 100% and ended the mask mandate. Texas is a leading state in regards to … END_OF_DOCUMENT_TOKEN_TO_BE_REPLACED