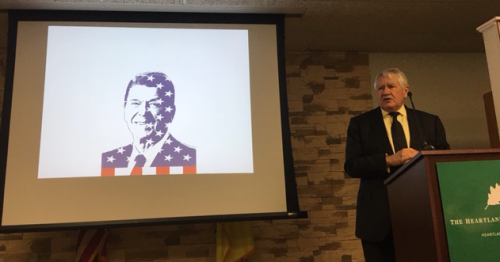 Historian and author Larry Schweikart spoke about his new book, Reagan: The American President at the Heartland Institute April 24, continuing presentations to the public in its Andrew Breitbart Freedom Center.

Based on never-before-seen papers from the Reagan Presidential Library, rather than interviews with family and members of his administration, the book covers Reagan’s life, early career, and presidency. Schweikart offered attendees amazing and fascinating never-heard-before snippets about our 40th president. Check here to see a listing of Schweikart’s numerous books.

The full video of Heartland’s Larry Schweikart event can be viewed here.

The narrative presented by Nancy Thorner in her article only scratches the surface of what Schweikart recounts in his amazing bio of Reagan. It’s not only a delight to read, but also a must-read.

According to Schweikart, “Reagan bled red, white, and blue. The guy you saw was the guy you got.” Schweikart’s narrative started with Reagan as a lifeguard as a young man on the Rock River where he saved 77 people from drowning. Attending Eureka College, Reagan desired to become a football player, but because of poor eyesight was relegated to the position of lineman. Though not a particularly good student with a C average, Reagan did become the first and only protest leader at Eureka College (a Christian College). Seniors, having heard about Reagan’s prowess for speaking as a Freshman, and not feeling comfortable doing so themselves, asked Reagan to lead a protest when a long-time tradition at Eureka, a school dance called The Grind, was canceled. A humorous demonstration by Schweikart of the banned dance showed The Grind far from offensive, but as an innocuous get-acquaintance dance!

As to Reagan’s first job after college, it was in Iowa as an announcer covering Chicago Cubs baseball. He used ticker tape information to announce the plays, and during failure of the machine Reagan showed his talent for story-telling by embellishing upon what was happening in the Cubs game live back in Chicago. It was often a far cry from what really had occurred in real time.

Reagan’s break into movies came when he went to California with the Cubs for spring training. While there a friend arranged for Reagan to have an interview and screen test with Warner Brothers. The rest is history. Schweikart’s rating of Reagan as an actor was poor, while Schweikart wondered aloud in his presentation whether Reagan really wanted to be an actor. With the exception of the two movies below, Reagan didn’t throw himself into his roles to become one with the characters he was portraying.

Reagan wasn’t popular on the movie set when interacting with fellow actors. He bored them. While the actors wanted to gossip, Reagan preferred to talk about politics and economics, about which he had developed a passion. Schweikart said politics possibly drove away his first wife, Jane Wyman, who was only interested in her next movie role. Wyman did nominate Reagan as an acting member of SAG, which he soon came to lead. Only two presidents were members of SAG, Schweikart pointed out: Ronald Reagan and Donald Trump. Finding hard core Commies within SAG’s leadership, it was thought that Reagan would seek to drive them out. But in a surprise move while testifying in front of the U.S. House Un-American Affairs Committee, Reagan only expressed his aversion to censoring Freedom of Speech.

In 1964, Reagan was asked to give a speech for Republican candidate Barry Goldwater. In hearing Reagan give his Time for Choosing address on October 27, 1964, it occurred to Republican big wigs they had chosen the wrong guy. Soon after, Reagan was encouraged to run for Governor of California.

In 1976 Reagan was thought too old to run, and he ran against the wishes of his family, yet Reagan came within 100 delegates of beating a sitting incumbent Republican president, Gerald Ford, in a presidential race ultimately won by Jimmy Carter.

Four years later, Carter underestimated Reagan as many underestimate Trump, thinking Reagan would be easy to beat. Near the very end of the 1980 campaign, Reagan’s team felt he was falling behind. So he accepted a debate with Carter and, in the latest one held at that time before an election, Reagan won the debate with these five words: “Well, there he goes again.”

Chapter 8 of Schweikart’s book labels Jimmy Carter as the The Worst President Ever, with an asterisk at the bottom of the page that states: “Prior to 2009.” Carter, like Obama after him, consistently blamed the American people for his failings.

Reagan had what Schweikart called a “holistic view of politics.” He saw defeating the Soviet Union and reviving the nation’s economy as two sides of the same coin. “As America gets better, evil gets worse. As American does well, our enemies do worse.”

Having won the presidency in 1980, one of the first acts by Reagan was to ask Paul Volcker to stay on as head of the Federal Reserve to get rid of inflation, which Volcker did by squeezing inflation down to zero by 1982. Because Reagan understood Russia exported four things – vodka, oil, gold, and spies – when Volcker cut inflation the price of gold likewise fell to starve the Soviets of cash.

Reagan believed in winning the Cold War. All other presidents up to Reagan tried to manage the war, adhering to the idea that “mutual assured destruction” would keep the peace. But very early on Reagan wanted to totally abolish nuclear weapons. The Trident submarine contract, started under Carter, was expanded under Reagan as part of his plan to revitalize the nation’s nuclear parity with the Soviet Union – what Reagan called “The Evil Empire.”

The Importance of Rock and Roll

Schweikart, who was a touring rock musician before becoming a historian and college professor, talked about the alliance Reagan formed with Pope John Paul II to get religious hostages out of Russia.

Reagan understood the value of Rock ‘n Roll music, and it was beamed into Europe through Voice of America and Radio Free Europe. Rock music represented the music of freedom, Schweikart said. Every song starts with the group and ends with the group. It also has a middle. The inference being: “Things are done together, but you never lose your individuality.”

Toward the end of Reagan’s presidency in 1988, East Germany’s Communists held a concert and invited Bruce Springsteen. Believing Springsteen would rail against the Reagan administration, the Communists were flabbergasted when Springsteen told the 80,000 youth present, all who wanted to be Americans, that he just wanted to play his music, which included Born in the U.S.A.

Reagan formed an alliance with Polish labor leader, Lech Walesa, but Reagan’s best alliance was with Margaret Thatcher of Great Britain. Their alliance was not without its conflicts, as happened with Britain’s Falkland War and America’s liberation of Granada, but their disagreements were always patched up.

Reagan’s last formal trip to Moscow was in 1988 to talk to Soviet Premier Mikhail Gorbachev. Its purpose was twofold, to talk to Gorbachev about politics and to convert Gorbachev to Christianity – this after no one had talked about Christianity in Russia for 60 years! The first thing Reagan did was ask Gorbachev about his relationship with God. Gorbachev admitted to being baptized as a child, but that now he’s a Communist who was raised as an atheist. Even so, upon returning home Reagan had this to say: “I think Gorbachev’s now thinking about saving his eternal life.”

When asked for the first time by a reporter to appear with riding gear for a photo, Reagan came out wearing jodhpurs and carrying an English saddle, how Reagan usually rode. But the reporter wanted Reagan in a cowboy outfit, so Reagan changed to jeans.

It was a sad moment when Reagan announced he had Alzheimer’s, but one thing he could still enjoy was riding. When Reagan jumped on his horse, the Secret Service men had to execute the same jumps. Out riding one day, Reagan had trouble with his horse. President Reagan’s longest-serving, highly decorated Secret Service agent and close friend John Barletta, informed Mrs. Reagan that Ronnie should stop riding. To which Nancy replied: “You will tell him, John.”

When Reagan died, the population of an entire city turned out at the Reagan Library in Simi Valley, California to view his body before it was transported to Washington, D.C., where it would be lying in state for the nation in the Capitol.

After eight years of President Reagan (January 20, 1981 to January 20, 1989), the American people went out there and won one more for the “Gipper” with the fall of the Berlin War on November 9th, 1989. A portion of the wall stands as a monument at Reagan’s Presidential Library.

One question of note is when Schweikart was asked to rate Donald Trump compared to the presidency of Ronald Reagan. Schweikart had already ranked presidents in order of importance as George Washington, Abraham Lincoln, Ronald Reagan, and Calvin Coolidge. In response, Schweikart related how it was yet too early to rate Trump, but that Trump might one day replace Reagan as #3, with Reagan dropping to fourth place.

What You Need to Know is Nancy Pelosi and her colleagues are locking the American people into a solitary bubble. People are brainwashed and trapped in … END_OF_DOCUMENT_TOKEN_TO_BE_REPLACED

Phyllis Schlafly Eagles · May 5 | How Effective Is Social Justice Military Recruitment? As Covid subsides, the tyranny that exploited it continues. … END_OF_DOCUMENT_TOKEN_TO_BE_REPLACED

What You Need to Know is the problem with forgetting about China. The looming issue for nations across the South Pacific is the growing influence of … END_OF_DOCUMENT_TOKEN_TO_BE_REPLACED

What You Need to Know is American drug overdose deaths hit a new record. We are up to 107,000 Americans who have died in the last year because of … END_OF_DOCUMENT_TOKEN_TO_BE_REPLACED

For Immediate Release: May 11, 2022Contact: Ryan Hite, Communications Director Staggering 8.3% Inflation Can Only Be Blamed On Biden's Broken … END_OF_DOCUMENT_TOKEN_TO_BE_REPLACED

Phyllis Schlafly Eagles · May 16 | The Trickle-Down Effect of Bad Policies Good news arrived in the district court of the District of Columbia, … END_OF_DOCUMENT_TOKEN_TO_BE_REPLACED

Phyllis Schlafly Eagles · May 4 | Who Sold a Million Books a Year? ** Previously recorded by Phyllis Schlafly // May 2015 ** Any modern author … END_OF_DOCUMENT_TOKEN_TO_BE_REPLACED

Phyllis Schlafly Eagles · April 29 | When Will We Cancel Darwin? For those of you who haven’t heard, cancel culture is the latest trend among … END_OF_DOCUMENT_TOKEN_TO_BE_REPLACED

“He was definitely into video games - shooter games,” a classmate observed about the Buffalo grocery-store mass murderer. A British tabloid reported … END_OF_DOCUMENT_TOKEN_TO_BE_REPLACED