On the 525th anniversary of the European discovery of America, New York’s 90-foot tall monument in Columbus Circle escaped damage — but only because the NYPD maintained a 24-hour honor guard the entire holiday weekend. Police protection was needed because the violent leftwing movement known as “antifa” had announced a nationwide campaign to “deface Columbus Day.” 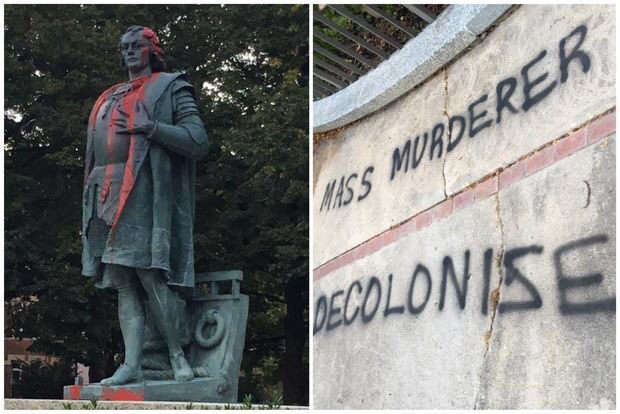 Statues left unguarded were not so fortunate. Around the nation in recent weeks, statues of Columbus have been toppled, splattered with paint or otherwise vandalized. In Los Angeles, a Columbus statue was shrouded in a white sheet, ostensibly for its own protection, after the L.A. City Council voted to rename the paid holiday as Indigenous Peoples Day.

The mayor of New York City had let it be known that the monument in Columbus Circle was at risk. He has appointed a commission to review the political correctness of hundreds of monuments, plaques and statues throughout the city.

Americans were already celebrating Columbus on the 300th anniversary of discovery, in 1792, when a Columbus monument was erected in Baltimore. Despite the lack of Italian or Spanish people in the original 13 colonies, the English settlers recognized that Columbus’ discovery of the New World was the event that made America possible.

Our nation’s capital is the City of Washington in the District of Columbia, honoring the two men who made our country, and Columbus’s name is reflected in many other places. For much of the 19th century, the word Columbia was often used as an alternative to America.

As President Trump said in proclaiming the federal holiday, Columbus’s voyages “undeniably and fundamentally changed the course of human history and set the stage for the development of our great Nation.” On Columbus Day, Trump declared, “we honor the skilled navigator and man of faith” for his “courageous feat — even in the face of extreme doubt and tremendous adversity.”

What a welcome difference from the apologetic tone of Obama’s proclamation one year earlier, which omitted any praise of Columbus or recognition of his greatness.

What You Need to Know is the media is finally reporting on the Southern Border! Governor Ron DeSantis and Governor Greg Abbott are forcing the media … END_OF_DOCUMENT_TOKEN_TO_BE_REPLACED

What You Need to Know about Priorities & America First. Phyllis Schlafly would give awards to significant people in her life. On these awards … END_OF_DOCUMENT_TOKEN_TO_BE_REPLACED