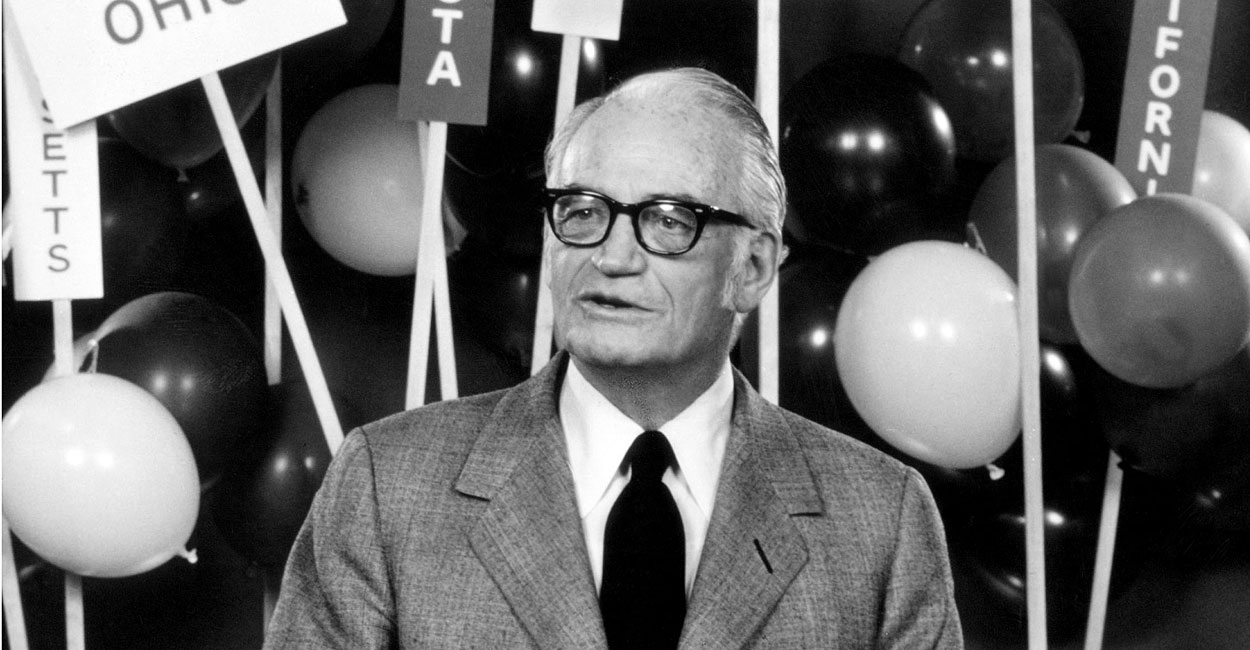 The nomination of Barry Goldwater by the Republican National Convention in 1964 was the first big victory enjoyed by the modern conservative movement. As we know, he was soundly defeated in November by President Lyndon B. Johnson, but Goldwater remained the titular leader of the conservative movement until Ronald Reagan came along in the 1970s.

The myth has grown up that the Goldwater ideology of the 1960s was solely a fiscal philosophy, and that moral issues only became important in politics with Ronald Reagan. That’s not true.

It is correct that abortion, the Equal Rights Amendment, and gay rights were not hot-button issues in the 1960s. But if you go back and read Barry Goldwater’s books and speeches in the 1960s, you will see that they are firmly grounded in a moral philosophy.

The social issues were very important in the origins of the conservative movement.

In his famous book The Conscience of a Conservative, Barry Goldwater said that conservative principles “are derived from the truths that God has revealed about His creation.” In his speech accepting the 1964 presidential nomination, Goldwater praised

“freedom under a government limited by the laws of nature and of nature’s God.” He warned that “those who elevate the state and denigrate the citizen must see ultimately a world in which earthly power can be substituted for Divine Will,

and [Goldwater said] this Nation was founded upon the rejection of that notion and upon the acceptance of God as the Author of freedom.”

Again and again Goldwater warned about the moral decay of our people. The 1964 Republican Platform endorsed a constitutional amendment to overturn the Supreme Court decision banning prayer in public schools.

Goldwater’s greatest contribution to American politics did not lie in any impact he might have had on foreign or economic policy, but in the way he forced the “moral issue” onto the national agenda.

What You Need to Know is we are in a proxy war with Russia. Until now, we’ve been able to at least try to say we have given Ukraine defense weapons … END_OF_DOCUMENT_TOKEN_TO_BE_REPLACED

What You Need to Know is a lesson on documents and double standards. Suddenly everyone has classified documents and everyone is spinning the stories … END_OF_DOCUMENT_TOKEN_TO_BE_REPLACED

What You Need to Know is to thank the Freedom 20 who took up the House Speaker fight last week. Get the list here — it only takes 3-5 minutes … END_OF_DOCUMENT_TOKEN_TO_BE_REPLACED

Phyllis Schlafly Eagles · February 3 | "Woman" Is the Word of the Year The internet is a powerful tool that most of us use every day. … END_OF_DOCUMENT_TOKEN_TO_BE_REPLACED

What You Need to Know is Tucker is allowing the will of the people to be heard! When a huge block of Republicans and so-called conservatives are … END_OF_DOCUMENT_TOKEN_TO_BE_REPLACED