New Year’s Day rang in the sale of pot in retail stores in California. Anyone over the age of 21 may smoke pot on private property now in California. 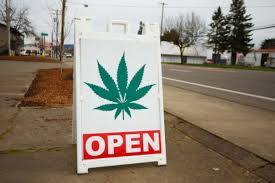 This push for pot is not really coming from the freedom-loving culture of rock music. Instead, like gambling, legalizing pot is driven by a multi-decade campaign of investors seeking to profit from cannabis, as it’s now being advertised for marketing purposes.

First it was sold to the American people under the guise of “medical marijuana,” and predictably anyone with a little back or joint pain was obtaining prescriptions to get high. The strategy was to open the door to the inevitable recreational use by anyone, which is occurring now in eight states.

This is too much even for rock fans, as California's popular Coachella Valley Music and Arts Festival recently responded to the legalization of marijuana by banning it at its concerts.

If concerts won’t allow smoking pot, why do the rest of us have to put up with its pungent odor and harmful consequences? Costly emergency room visits by “potheads” and deadly car accidents are just two of the burdens that rampant marijuana addiction brings to our society.

Among traffic fatalities in Colorado when operators were tested for marijuana, 25% of those crashes had an operator who tested positive for the drug. This is a sharp increase since marijuana was legalized there, and the real number may be higher because unlike alcohol there is no close correlation between impairment and tissue levels.

Meanwhile, the town of Pueblo, Colorado, is buckling under the expense of “marijuana migrants,” attracted to the town’s pro-marijuana publicity. Instead of finding real work, however, most of these marijuana migrants live in boxes, resorting to buckets as toilets.

What You Need to Know is Fauci retires from the Covid Industrial Complex! He’s sneaking out under the cover of Thanksgiving and a no-news week. He … END_OF_DOCUMENT_TOKEN_TO_BE_REPLACED

What You Need to Know about the Red Tsunami! Turnout for the November, 8th, 2022 midterm election will be high. Be on the lookout for fraud. But we … END_OF_DOCUMENT_TOKEN_TO_BE_REPLACED

Phyllis Schlafly Eagles · December 2 | The Past, Present, and Future of the War on Christmas Haul out the holly and bring out the boxing gloves. … END_OF_DOCUMENT_TOKEN_TO_BE_REPLACED

Phyllis Schlafly Eagles · December 1 | We Need More Badges Herschel Walker had an iconic moment in a debate with Sen. Raphael Warnock when he … END_OF_DOCUMENT_TOKEN_TO_BE_REPLACED