The thrilling confirmation of Brett Kavanaugh to the Supreme Court fulfills the vision of Phyllis Schlafly in her early endorsement of Trump.  By trouncing the radical feminists in this high-stakes battle for the Supreme Court, President Trump has transformed the Republican Party just as Phyllis Schlafly wanted. Kavanaugh’s 50-48 confirmation by the Senate was also a victory for the rule of law over rule by a mob.  “You don’t hand matches to an arsonist,” Trump declared afterwards, and “you don’t give power to an angry leftwing mob.” 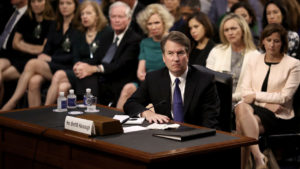 Kavanaugh’s 50-48 confirmation by the Senate was also a victory for the rule of law over rule by a mob.

Ford’s accusations against Kavanaugh were worse than being implausible.  They were also unworthy of the heightened attention given to them by the liberal media and the 48 Democratic Senators who voted against him. Even if Ford’s accusations had some basis in fact, they were not serious enough to be considered at this late date.  The Senate demeaned itself by forcing Kavanaugh to explain what he meant in his writings as a 17-year-old in his personal diary and his high school yearbook.

By her own account, Ford said she attended and drank beer at an unsupervised house party along with older teenage drunken boys.  She alleges that at some point she was groped by two of the boys, whose identities remain unknown, but she admitted that everyone was fully clothed at all times. If such a complaint had been made then, the police would not have even bothered to pursue it.  It would have been such a minor, unprovable infraction that criminal charges would never have been brought. The complete silence by Ford for 29 years afterwards suggests that even if it did happen, it was not particularly significant to her.  Most likely it did not happen at all.

Yet while talking to a therapist nearly three decades later, Ford supposedly “recovered” a memory that could easily exaggerate key details and make mistakes of identity.  On the basis of her recovered memory, she tried to bring down Brett Kavanaugh’s career, while keeping her own identity secret in order to avoid the risk of cross-examination.

It was a close call, but Christine Blasey Ford’s uncorroborated accusations were simply not credible to the fair-minded Senators.

Phyllis Schlafly Eagles · February 3 | "Woman" Is the Word of the Year The internet is a powerful tool that most of us use every day. … END_OF_DOCUMENT_TOKEN_TO_BE_REPLACED

Phyllis Schlafly Eagles · #WYNK: Pro-Life Movement Has to Adjust | January 19, 2023 #ProAmericaReport The following is a transcript from the Pro … END_OF_DOCUMENT_TOKEN_TO_BE_REPLACED

Phyllis Schlafly Eagles · #WYNK: Political Hit Jobs Against Lawyers | January 18, 2022 #ProAmericaReport The following is a transcript from the Pro … END_OF_DOCUMENT_TOKEN_TO_BE_REPLACED

Phyllis Schlafly Eagles · February 8 | Leftist Hollywood's Downward Spiral Looking back on 2022, it is plain to see that Democrat-dominated … END_OF_DOCUMENT_TOKEN_TO_BE_REPLACED