There are 206 counties that voted for Obama in 2008 and 2012 but then for Trump in 2016. Ballotpedia calls them “Pivot Counties.” Located in 34 states, these Pivot Counties comprised a total of 5.5% of the electorate and provided the margin of difference for Trump to prevail. 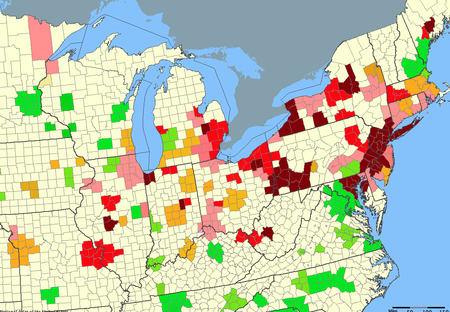 The Allott Brothers, of the Washington Examiner, are studying a subset of these Pivot Counties. Their work illustrates that Trump’s most important support is not from the stereotypical rich white males as Trump’s detractors pretend.

In May, they released their analysis of Robeson County, North Carolina, which switched from voting for Obama two times to voting Trump last November. It is the state’s largest county, and was one of the six Pivot Counties in North Carolina that went from thoroughly blue to bright red, thereby enabling Trump to carry the state.

Obama had carried Robeson County by a landslide margin of 17 points in 2012, but then Trump carried it by 4 points in 2016. That is a 21-point swing in just four years.

Robeson County, like many of the Pivot Counties, is awash in poverty and what Daniel Allott calls “cultural despair.” Prior to Trump, a Republican presidential candidate had not won the county since 1972.

Robeson County is not overwhelmingly white in race as one might mistakenly think. To the contrary, Robeson County is racially diverse, with more than half of its voters either American Indian or African American.

It has been devastated by the loss of manufacturing jobs, and its average income is only $30,000 today, far less than the national average. This is one of hundreds of counties in the United States which has been ravaged by the so-called “free trade” that deprives Americans of good jobs while enriching Wall Street.

Two-thirds of our country contains at least one Pivot County, and the biggest clusters of them are in Iowa and Maine.

Equally telling are the states that have no Pivot Counties, where voters are so locked into the Democratic machine that not even a charismatic candidate like Trump can dislodge the grip. Liberal strongholds of California, Massachusetts, and Nevada, for example, did not have a single county that switched from Obama to Trump.

Phyllis Schlafly Eagles · #WYNK: Who's Against Trump | June 13, 2022 #ProAmericaReport The following is a transcript from the Pro America … END_OF_DOCUMENT_TOKEN_TO_BE_REPLACED

By Mason Mohon, Phyllis Schlafly Eagles Intern Abortion is the most controversial issue in the United States today, with both sides having great … END_OF_DOCUMENT_TOKEN_TO_BE_REPLACED

For Immediate Release: June 24, 2022Contact: Ryan Hite, Communications Director Now Is The Time to Stand Up for Moms and Babies Without … END_OF_DOCUMENT_TOKEN_TO_BE_REPLACED