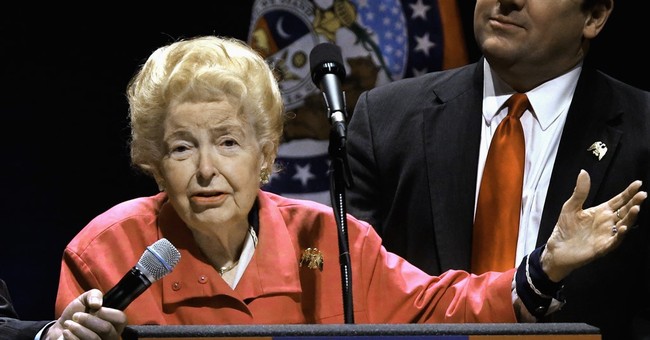 Phyllis Schlafly, conservative icon and my late boss, passed away four years ago today at the age of 92. She was an unwavering voice for the pro-family movement and her life’s work and legacy live on.

Phyllis volunteered in American politics for seventy years, influencing many different political and cultural issues. From military superiority and national sovereignty to education and pro-life, she articulately shaped conservative policy.

Phyllis is perhaps most famous for leading the decade-long fight to defeat the so-called Equal Rights Amendment which she saw as a threat to all women. Her influence didn’t stop there. She also fought for decades to insert and preserve a strong pro-life plank in the Republican Platform.

Phyllis attended the Republican National Convention from 1952 through 2016 as a delegate or alternate delegate. She often played an important role as a member of the Platform Committee. This committee, comprised of one male and female from each state and territory, authors the policies and goals of the GOP. Phyllis referred to the platform as “the flag soldiers carry into battle” and “the standard to which public officials may be held accountable.”

After the Supreme Court ruled on Roe v. Wade in 1972, Republicans and Democrats alike supported a “woman’s right to choose” to murder her unborn baby. Phyllis took it upon herself to demand that the Republican Party protect the unborn by inserting a pro-life plank into their platform.

In 1984, Phyllis and Congressman Henry Hyde served as the Illinois Delegates on the Platform Committee. They worked tirelessly to add this language to the party platform: “The unborn child has a fundamental, individual right to life which cannot be infringed.”

In 1990, she founded the Republican National Coalition for Life to “defend the Republican Party’s principled commitment to legal protection for all innocent human beings, from conception until natural death.” Through this organization she would hold elected officials accountable to their platform. RNC for Life proved essential when Mary Dent Crisp and other pro-ERA, pro-abortion moderates attempted to remove the pro-life plank in 1992.

In the coming years, battles ensued between conservatives and moderate Republicans over the pro-life language, but Phyllis never shied away from challenging the Establishment. Thanks to Phyllis’s work, it became essentially impossible to run as a Republican without adopting the pro-life position.

Phyllis’s influence at the conventions extended into many other issues the grassroots care about. American self-government, border security, the protection of American workers, and traditional marriage are all causes she defended as a platform committee member.

Beginning in 1960, Phyllis hosted a party for delegates to the RNC. This quadrennial event was attended by hundreds and eventually termed “The Life of the Party Luncheon.” She also trained delegates on strategies to keep the platform conservative. Phyllis stated that “The history of battles over Republican platforms teaches us that standing on principles of authentic conservatism and traditional values is the road to victory.”

I was privileged to accompany Phyllis to the St. Louis Peabody Opera House in March 2016 when she endorsed Donald Trump for president. She believed that he was our “choice” candidate, not an echo of the globalist “Kingmakers” — who she named in her 1964 book A Choice Not An Echo.

Prior to getting on stage, Phyllis met privately with Donald Trump, handed him a copy of the 2012 platform, and asked him to support it. She told him “this is the best and most conservative platform we’ve ever had.” He assured Phyllis the platform had his endorsement and he would stand by it.

Phyllis told the packed auditorium she believed Trump really would defend conservative values. “Now we have a guy who is going to lead us to victory!” she boldly proclaimed.

Phyllis so strongly believed Trump was the right man for the job that she authored “The Conservative Case for Trump.” Her final book was released on September 6, 2016, the day after she passed.

Though Phyllis did not live to see Trump elected as our 45th president, he kept his promise to her. He has upheld the conservative Republican Platform and put forth policies to Make America Great Again.

Before the 2020 convention, there was discussion of reducing the Republican Platform to one page. Ultimately, the RNC executive committee voted to leave the 2016 platform in place. This was a great victory for Phyllis and her tireless years of effort to maintain a platform that supports the views of grassroots Americans.

At her funeral, President Trump called Phyllis a “hero” and an “American patriot.” This description is not exaggerated. Phyllis Schlafly locked in the conservative values of the Republican Party — values that made our nation great.

Now it is our responsibility to carry on the work of Phyllis Schlafly. We must preserve these American values so we can enjoy four more years of liberty and prosperity.

What You Need to Know is we are in a proxy war with Russia. Until now, we’ve been able to at least try to say we have given Ukraine defense weapons … END_OF_DOCUMENT_TOKEN_TO_BE_REPLACED

What You Need to Know is a lesson on documents and double standards. Suddenly everyone has classified documents and everyone is spinning the stories … END_OF_DOCUMENT_TOKEN_TO_BE_REPLACED

What You Need to Know is to thank the Freedom 20 who took up the House Speaker fight last week. Get the list here — it only takes 3-5 minutes … END_OF_DOCUMENT_TOKEN_TO_BE_REPLACED

Phyllis Schlafly Eagles · #WYNK: Trump is Stronger Than Biden | January 27, 2023 #ProAmericaReport The following is a transcript from the Pro … END_OF_DOCUMENT_TOKEN_TO_BE_REPLACED

What You Need to Know is Trump is stronger than Biden. Our American leaders sending tanks and weapons to escalate the war in Ukraine aren’t in line … END_OF_DOCUMENT_TOKEN_TO_BE_REPLACED

Phyllis Schlafly Eagles · #WYNK: Documents and Double Standards | January 24, 2023 #ProAmericaReport The following is a transcript from the Pro … END_OF_DOCUMENT_TOKEN_TO_BE_REPLACED